Why Morality Must be Objective

My son is a big Disney fan. He loves the movies, the theme parks, and just about everything Disney.  Walt Disney really knew how to not only tell a good story, but reflect the way many people feel. Pinocchio is a great example of this. In Disney's version, one of Pinocchio's temptations is to go to Pleasure Island, where there are no rules. You can break things, get in fights, smoke, drink, or do anything your heart desires and never get in trouble. It seems a morality-free setting. 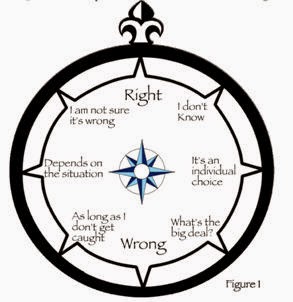 In reality, we know that it would be impossible to live out life morally free. If such a place existed, you could never be sure that someone else wouldn't strike out and kill you just for his own enjoyment. We rely on laws as well as the generally accepted ways of behavior so we can have order in our society. But these laws are not merely practical from a survival standpoint. They are essential.


Defining Morality: Commands for how we should live

When I talk about moral principles, I make the claim that they are objective and prescriptive. By objective, I mean that human beings don't invent morality out of nothing. Moral laws aren't merely ways we choose to live. They are as real as physical laws, such as gravity. That's what I mean when I say they are objective; moral laws are true whether or not anyone believes them or practices them. They exist apart from man and have their basis outside of mankind.

Some people believe morality is like traffic laws, that is they are merely a whole bunch of people getting together and agreeing that driving at some speed, say 80 miles per hour, is too fast and therefore pass laws to make it illegal to do so. There isn't anything intrinsically wrong with driving 80 miles per hour. For example, the Autobahn in Germany or certain areas of Montana don't have a maximum speed limit. But for this group of people in this place, they feel we'd all be better off if speeds were limited. However, morality is different from traffic laws. By saying morality is objective, it means that certain actions are wrong simply because they are wrong. It doesn't matter if a lot of people recognize that they are wrong.

By prescriptive, I mean that moral laws apply to all men at all times. Morality is what we should do; no one is exempt from it, no matter what their situation or status. Nutrition is a good analogy here. Human bodies have need for certain vitamins, minerals, and other elements  to continue operating. If you have a deficiency of Vitamin C in your diet, you can develop scurvy, and a deficiency of calcium will cause weakened bones and teeth susceptible to decay. These facts are true whether you know them and choose to eat wrongly or, like ancient sailors, don't know about them; you will still suffer the same effects regardless. Just as the human body requires nutrition to live, human persons require a moral framework to survive.

Morality is recognized by all men

Because moral laws are objective, they are also universal. All people have a moral sense inside of them. If God exists, it would make sense that He would create us with the ability to discover and understand moral laws. We find this is true through many different types of evidence. First, all societies do develop a moral foundation for their community. There are right and wrong ways to act across all cultures. Second, we find that the genesis of most of these laws has a common basis in development. Some cultures say that a man may marry only one wife, while other cultures permit multiple wives for one man. However, no culture deems it acceptable that a man may steal his brother's wife and marry her. The roots of marriage and spousal fidelity are universal.

Philosopher Paul Copan argues that human beings' ability to recognize certain actions as right and wrong is properly basic, just in the same way that recognizing colors is properly basic.1 If someone is color-blind, we see that as a defect in their visual processing. Similarly, we should question a person when they fail to recognize that moral values are real. Recently, an interesting study was published by Paul Bloom, a Yale professor of psychology who found that moral traits can be seen in infants even before they learned to speak and therefore were not influenced to believe in acting certain ways just to get cultural approval. He concluded that human beings are simply hard-wired for morality from birth.2 We all are born with a moral conscience that tells us right from wrong. That conscience shows that moral values exist and can be recognized by all men.

Everyone believes something is wrong

Some people will fight you on this point, but it's easy to show that people simply think in terms of right and wrong for certain actions and they can't escape doing so. If someone seeks to challenge the claim by saying they don't believe that objective moral values really exist, then just ask them if they have any money in their wallet right now. Tell them that you're planning to knock them over the head and take all their money. You will certainly get a quick reply that you cannot do such a thing. But if there's no morality, then there's nothing wrong with me taking all your money. You see, when people use the words “can't” and “shouldn't” in this context, they are really saying that there is a way to behave and what I just proposed isn't it. But who set that rule? Says who? What do you mean? Now you're invoking a moral law? I ought not to do that? You're saying I ought not to punch you in the nose? What this “ought to” stuff? Who's making these laws up? Now, some people believe that morality is relative, made up by people to get to an end. I've looked at the problems with moral relativism before, you can read those here, here, and here as a start. All that to say, we know that it's impossible for morality to be both objective and relative.


Killing babies for fun is always wrong — no matter what anyone thinks!

Another way to counter the claim "I don't think there's any such thing as moral law that exists" is to ask "So do you think killing babies for fun is okay? I really want to get this clear. Is that what you're telling me? That killing babies for fun is okay?" Any sane person wouldn't answer such questions affirmatively because, whether you believe it or not, it's never right to kill a baby just for the fun of it. Now, were there people who killed babies for fun? Absolutely. Even the Bible talks about the Assyrians and others who would ride into town and dash the children on the rocks and horrors like that. But when we read that we shudder. Such actions are hideous and never OK. I don't care if you believe it's right or not. People who believe killing babies for fun has any justification are regarded as sociopaths — people whose moral sense is defective. We lock such people away. Would the person claiming there is no moral law tell me that Jeffrey Dahmer was just exercising his morality? It was just right for him? Well, open up all the jails. Let everybody go. That's what asserting “there's no such thing as morality” means.

See, nobody lives an amoral life. What you find is people will be amoral about all the things that they don't care about. And that's intuitive. Everybody believes something is wrong. When you say that morality is merely a motive, it's like, "I don't like that." It's not an ought. Then it becomes a problem. When wronged, they will claim, "You shouldn't do that!” Even those with whom we have moral objections hold to some moral values.