Egypt holds fascination for many people. The practice of mummification, the pyramids, and all those hieroglyphics shrouded the ancient Egyptians in mystery and wonder for hundreds of years. It was widely known that Egyptian hieroglyphics were used as the primary way of written communication in their day, but no one could read them until the French discovered the Rosetta Stone, unlocking the secrets of the pictorial message system and allowing scholars to read and understand the thoughts of those who lived 3500 years ago. Before the decoding of Egyptian hieroglyphics, studying ancient Egypt was a lot of guesswork. After finding the Rosetta Stone and deciphering hieroglyphics, archaeologists could suddenly understand so much more about who the Egyptians were, what they believed, how they lived, and why they built the pyramids and created mummies.

In recent years, modern scientists have discovered another Rosetta Stone of sorts. The DNA molecule that exists in every cell of our bodies was first successfully modeled by James Watson and Francis Crick in 1953. Crick, after further investigation, also provided a model for how the genetic code in DNA is transferred within the cell.1 Soon it was understood that our DNA functions like a set of blueprints; it holds all the instructions to build your body so you look like you. But such a find is more than amazing when you think about it. You see, message systems are very special things that have certain attributes — attributes which can come only from minds. 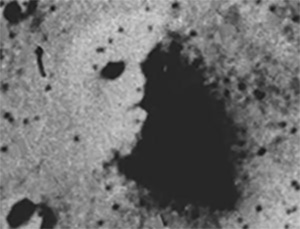 What Makes a Message?

In 1976, NASAs Viking I spacecraft had reached Mars and was taking close-up photographs of the planet for the first time ever. One photo immediately caught the attention of everyone in the project. It seemed that there was a face carved into the Martian surface that measured over two miles across! NASA released the picture with the caption "huge rock formation ... which resembles a human head ... formed by shadows giving the illusion of eyes, nose and mouth."2 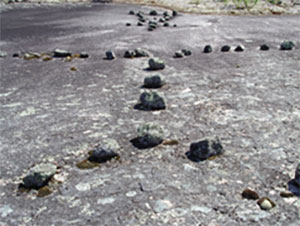 Now, scientists have discovered rocks that look like humans or animals before. Whiteshell Provincial Park in Manitoba, Canada has many different tone shapes like the one you see in photograph #2. These stones are in an arrangement where they look to resemble a man. So, why did the NASA scientists immediately assume that the face on Mars is a natural formation while archaeologists looking at the stones in Whiteshell Provincial Park assume that these were placed by prehistoric people? What's the difference?

In a nutshell, the difference is the rocks in Canada have three traits of an information-bearing system, all of which are necessary for us to assume that something is trying to be communicated:

And no matter if were looking at ancient stones or looking for messages from outer space, these are the traits we look for to determine whether what we find is an accident of nature or generating from a mind: order, complexity, and specificity. Since DNA shows those same three traits, it should be reasonable to conclude that there was a mind behind the creation of DNA.

1. For an extensive history of how Watson and Crick uncovered the shape of the DNA molecule and its further understanding, see Stephen C. Meyers comprehensive treatment in Signature in the Cell. (New York:Harper Collins, 2009).