Islam began in the early seventh century, when Muhammad supposedly received many revelations providing him with the Qur'an. Given that Christianity and Judaism had been in existence for centuries, it's easy to see why Muhammad would have found it attractive to try and co-opt these monotheistic faiths as part of his own. To this end there are many places in the Qur'an that address Christians and Jews, and their holy books. 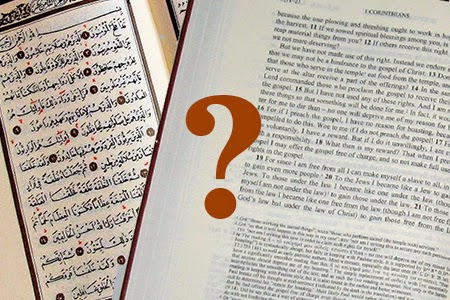 One key passage may be found in Sura 10:94, where Muhammad writes, "But if you are in doubt as to what We have revealed to you, ask those who read the Book before you; certainly the truth has come to you from your Lord, therefore you should not be of the disputers."1 Here, Muhammad is addressing the children of Israel, and appealing to the Bible in the phrase "the Book" as a way to authenticate his message.

There are many such passages in the Qur'an, some of which point specifically to the New Testament writings. The Arabic word for gospel is Injeel and Muhammad lifts up its authority as well:


If only they had stood fast by the Law, the Gospel, and all the revelation that was sent to them from their Lord, they would have enjoyed happiness from every side. There is from among them a party on the right course: but many of them follow a course that is evil. O Messenger! proclaim the (message) which hath been sent to thee from thy Lord. If thou didst not, thou wouldst not have fulfilled and proclaimed His mission. And Allah will defend thee from men (who mean mischief). For Allah guideth not those who reject Faith. Say: "O People of the Book! ye have no ground to stand upon unless ye stand fast by the Law, the Gospel, and all the revelation that has come to you from your Lord." It is the revelation that cometh to thee from thy Lord, that increaseth in most of them their obstinate rebellion and blasphemy. But sorrow thou not over (these) people without Faith. (Sura 5:66-68, emphasis added.)2

Another passage advocating study of the Bible is found in Sura 4:136:

Notice how this verse places the Bible (the "book which He revealed before") as equal with the Qur'an ("the Book which He has revealed to His Messenger.) Clearly we are to believe both books, otherwise this verse makes no sense.

The problem that the Qur'an has is that other writings of Muhammad contradict the idea that the Bible is an accurate guide to God. Sura 2:75-79 is a good example:


Do you then hope that they would believe in you, and a party from among them indeed used to hear the Word of Allah, then altered it after they had understood it, and they know (this) And when they meet those who believe they say: We believe, and when they are alone one with another they say: Do you talk to them of what Allah has disclosed to you that they may contend with you by this before your Lord? Do you not then understand?… Woe, then, to those who write the book with their hands and then say: This is from Allah, so that they may take for it a small price; therefore woe to them for what their hands have written and woe to them for what they earn (emphasis added).4

But why would the Qur'an itself recommend people to follow the Old and New Testaments if these are supposedly corrupt? If I receive a set of directions that promises to lead me to a destination, but I know that they've been corrupted, it would be silly for me to either follow them or provide them to another. Corrupt directions leads a person astray.

Because of the tension in the Qur'an, Muslim apologists have had to resort to a bit of double-talk in seeking to reconcile their stance. This is a good example:


The reason why the "gospels" of the bible are named as such today is because they were named after the original Revelations that Jesus had. So in other words, the real Gospel is the Gospel of Jesus Christ. Everything else is a fabrication on the mouths of Jesus and his disciples. There is no such thing, in Islam, called "gospel of Matthew", "gospel of John", etc... Now whether or not there is actually a gospel out there with the name "The Gospel of Jesus", in the scriptures outside the bible, that is something I don't know, and certainly, even if it does, we still couldn't be sure that it too didn't get corrupt. The original teachings are simply lost from this earth. Only the Glorious Qur'an is the original Word of Allah Almighty. Nothing else stands. All of the other books contain corruptions and lies in them (emphasis in the original.)5

However, such an explanation is hopelessly confused. This is primarily because we know that the New Testament preceded Muhammad by some three hundred years.6 By the time of Muhammad's writing, the scriptures were firmly established and the text is the same then as what we have now. This leaves the Muslim with quite a dilemma: either the Qur'an in those verses that recommend believers to seek out the Gospel and the Bible were telling them that the Bible as it now stands is reliable or it is instructing believers to read a collection of books that simply don't exist and didn't exist even in Muhammad's day. Wither you are to gain guidance from corruption or you are to seek out guidance from a non-existent entity.


Following the Map to Atlantis

Most Muslims that I speak with take the latter choice. They claim that the true Gospel has been hidden, but one can find it in the pages of the Qur'an. However, that doesn't solve their problem. Why does the Qur'an then command people to look to the Gospels and the Bible for truth? It's like telling someone that they must find and follow the map to Atlantis. Because Atlantis is a mythical place, there's no way that any map can lead them to truth.


Altering the Words of Allah

The last problem that Muslims run into when making the claim is that they undercut their Qur'an in another way, for as Sura 2 claimed above, Go d gave His word to the prophets, but it was nearly immediately corrupted. But why would Allah allow his holy word to be corrupted at all? The Qur'an itself teaches against this idea. In Sura 6:34 we find the statement "There is none that can alter the words of Allah" and in Sura 10:64 Muhammad writes "No change can there be in the words of Allah." So, how could these people have changed what it unchangeable? How can this be?

If the word of Allah is unchangeable, then the Bible cannot be corrupted. However, if men have the ability to change Allah's word, then the Qur'an itself must be understood as under the same suspicion of change as the other books that Allah gave to his prophets. That means that the Qur'an must withstand certain scrutiny, such as whether it is internally contradictory. Given its claims on the Bible, I don't see how it could pass that test.