This year, I took a group of students to Manti, Utah where they had the chance to talk with many people who were raised in the Church of Jesus Christ of Latter Day Saints, otherwise known as Mormons. Most of these folks didn't even understand orthodox Christian doctrine. Part of the problem is that Mormons will use Christian terms but pour different meaning into them, such as the concept of salvation. 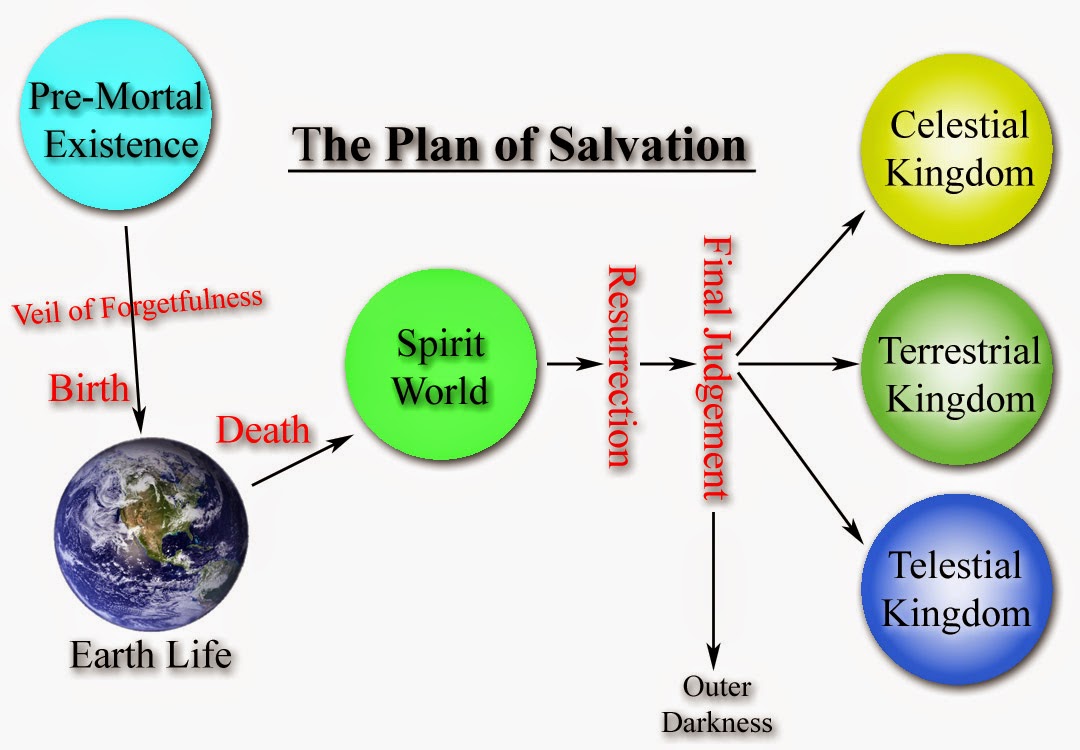 For a Christian, salvation means a person has recognized his sinfulness, knows that there is no way he can justify his sinful actions to a holy God, and places his trust in Christ's sacrifice on the cross as atonement for those actions. In this way, Christians are seen as righteous in the sight of God and they may dwell with Him eternally. However, Mormon doctrine is very different. The LDS church teaches that "salvation is synonymous with immortality" 1 and all are saved except for those that apostatize against Mormonism. Thus, almost everyone will live in a heavenly terrestrial kingdom but only Mormons in good standing will live in the higher celestial kingdom.2

The Mormon view of salvation is attractive to many people because hell isn't necessarily an eternal punishment. Like a lot of others who are uncomfortable with the idea of "nice" people going to hell, this seems to be a more comfortable solution. However, while the idea may seem uncomfortable, part of our discomfort is in our fallen state we tend to diminish the heinousness of sin and misunderstand what holiness really is.


God is a Holy God

One of the differences between the Christian God and the Mormon one is that the Christian God is completely holy. He has never not been completely holy. He is eternally God, and therefore His holiness is essential to His nature as God. The God of Mormonism, however, was once a man like you and me. He didn't create us out of nothing, but we were his spirit children birthed from a heavenly mother, and if one practices proper Mormon rituals he may become a God himself.3

These competing views really affect how one understands holiness. I like to use the comparison of an old laundry detergent commercial to make this point. The camera would show one sock on a table. A second sock would fall on top of it with the voice-over narrating "Your old detergent may get your whites this clean." The sock was indeed markedly cleaner and whiter. People would perhaps buy the detergent if the commercial stopped there. But the commercial then shows a third sock falling atop both. This third sock is much whiter than even the second sock, and the narrator promised that his product can produce whites this much whiter than the competing brand.

The reason why the second sock appeared white is because the comparison was relative to only the first. In our sinful world, we have only other sinners by which to compare ourselves. Once we begin to understand true holiness, we begin to see all of humanity stained with the blackness of sin. A holy God cannot allow any sin to go unpunished. Every sin must be dealt with. Just as any amount of sewage left untreated will corrupt the purity of water, so any amount of sin left unpunished would corrupt the nature of a holy and just God, making Him something less.4

So, each person is offered a choice – you may accept the atonement Jesus provided for your sin and apply his righteousness (his "whiteness' as it were) to yourself, or you may choose to rely on your own level of righteousness. Sewage doesn't clean itself up, even after an eternity. Thus, you will forever be stained and forever be separated from God by your stain. It's what we would expect from a holy God.

1. McConkie, Bruce R. "Salvation". Mormon Doctrine. Salt Lake City, UT: Bookcraft, 1966. Print. 471.
2. McConkie, "Terrestrial Kingdom", 548.
3. As Lorenzo Snow, fifth prophet of the LDS Church exclaimed, "As man now is, God once was; as God now is, man may be" (Ensign, February 1982, pp. 39-40). This means that every worthy male, according to the standards of Mormonism, will become a god and rule over their own planet. But what about the women? That question was answered by Joseph Fielding Smith, tenth prophet of the Church, when he spoke of man's exaltation as it is called in Mormonism:


The Father has promised us that through our faithfulness we shall be blessed with the fullness of his kingdom. In other words we will have the privilege of becoming like him. To become like him we must have all the powers of godhood; thus a man and his wife when glorified will have spirit children who eventually will go on an earth like this one we are on and pass through the same kind of experiences, being subject to mortal conditions, and if faithful, then they also will receive the fullness of exaltation and partake of the same blessings. There is no end to this development; it will go on forever. We will become gods and have jurisdiction over world, and these worlds will be peopled by our own offspring. We will have an endless eternity for this (Doctrines of Salvation, Vol. 2, 48).

4. For more on this, see my article "How can a loving God NOT send people to hell?" at http://www.comereason.org/going-to-hell.aspM
Posted by Lenny Esposito at 1:56 PM
Labels: Hell, LDS, Mormonism, salvation, salvation by grace