Do you ever remember cutting class in High School? Perhaps there was an event you wanted to attend, so you decided to ditch one day. The problem with ditching school is the ever-present danger of being caught. Teachers take attendance and they want to know why you missed class when you show up the next day. A lot of kids I knew would simply forge an absence note from their mother or father to escape detection. 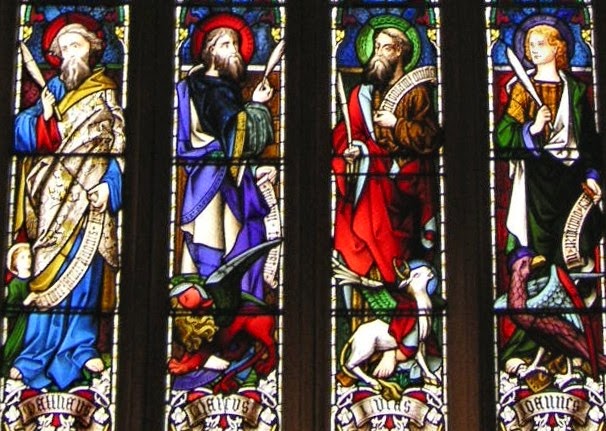 Why do kids forge notes from their parents, but not the next-door neighbor or a sibling? Usually, it is because it would make the note a whole lot less believable. If a neighbor signed the note, the student would be forced to go to much greater lengths to demonstrate he or she was in the neighbor's care or the neighbor had some legal authority over the child. It complicates things and makes people ask questions in a way that the more widely-recognized authority of the mother and father don't.


Why Forge These Guys' Names?

I bring this point up as I wrap down my little series on the authorship of the Gospels. While it is agreed that the original authors of the gospels didn't sign their names to them (something not uncommon when dealing with a popular level biographical account in the ancient world), they have always been attributed to Matthew, Mark, Luke, and John. In fact, that's a big point. Those who are skeptical will usually claim that no one knows who wrote any of the gospels. They were anonymous and the names they now bear were attached later. Yet, the gospels themselves claim to come from eyewitness testimony (Luke 1:1-3, John 21:24) and ancient biographers sought out eyewitnesses as the best type of evidence. Richard Bauckham, comments that historian Samuel Byrskog stresses that "for Greek and Roman historians, the ideal eyewitness was not the dispassionate observer but one who, as a participant, had been closest to the events and those who direct experience enabled him to understand and interpret the significance of what he had seen. The historians 'preferred the eyewitness who was socially involved or, even better, had actively participated in the events.'"1

Given that involved eyewitnesses would be considered more valuable, then one would imagine that these anonymously-written accounts would offer some more significant apostolic names to be associated with them. Two of the four gospels aren't even names of the apostles: Mark and Luke. Isn't this a bit like picking the next door neighbor to write your absence note? It takes more explaining and weakens the case for their authenticity. Of the two gospels that do bear the names of apostles, Matthew is more relatively obscure apostle, not an Andrew or Peter or James. Only John's gospel account bears the name of one of the "inner circle" of apostles, and his is the one that shows up last. If the pattern was to forge the names onto the Gospels, why wait until John to pick a prominent apostle, unless Matthew, Mark , and Luke actually did write their own Gospels?

Not only do we have some relatively obscure authors chosen for three of the four gospels, we also notice that there has never been any alternatives offered for the sources of the Gospels. Compare that to a truly anonymous book of the New Testament: the book of Hebrews. Early writers like Eusebius and Athanasius attribute the book to the Apostle Paul. Origen seems to have some misgivings about that, writing "For not without reason have the ancients handed it down as Paul's. But who wrote the epistle, in truth, God knows" (Eccl. History 6.25.13-14). Other possibilities like Silas, Timothy, or Apollos have also been offered, yet the book remains anonymous. The same is not true of the gospels; they are always and confidently ascribed to these four authors and no other possibility is ever advanced. Further, when the second century produced a flurry of forged gospels, such as the Gospel of Thomas and the Gospel of Peter, these were summarily rejected because they were forgeries. There does not exist any ancient list or writing offering as authoritative any accounts of Jesus's life other than Matthew, Mark, Luke, and John. This is strong evidence that the early church fathers were critical of claims that an apostle wrote a book without any good supporting evidence for it that ties it all the way back to the apostles themselves.

Given all that we know about the gospels, the testimony of people like Papias who sought to establish their relation to the eyewitnesses, the internal testimony and claims that they were written by eyewitnesses, and the lack of other options, it is more reasonable to hold that the gospels were written by Matthew, Mark, Luke, and John than to believe they are forgeries.