How Would Stephen Fry Answer His Own Challenge to God?

The British actor and comedian Stephen Fry has lit the Internet ablaze. During a taping for the show The Meaning of Life, interviewer Gay Byrne asked the atheist Fry the question that was previously posed to Bertrand Russell: "Suppose it's all true, and you walk up to the pearly gates and you are confronted by God. What will Stephen Fry say to him, her, or it?" (You may watch the full clip below.) Fry fired off a very emotional response, beginning with:


I'd say, "Bone cancer in children? What's that about? How dare you! How dare you create a world to which there is such misery that is not our fault! It's not right; it's utterly, utterly evil. Why should I respect a capricious, mean-minded, stupid God who creates a world which is so full of injustice and pain." That's what I'd say.1 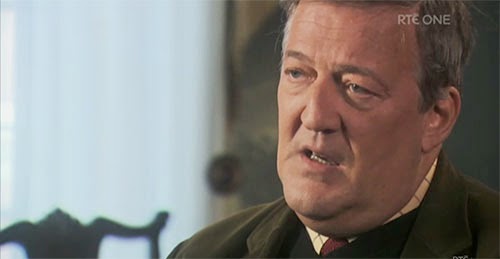 He goes on to object to God creating the parasites that cause river blindness, detailing the symptoms of some of the more horrific cases. When asked by Byrne "And you think you are going to get in, like that?" Fry responded "No, but I wouldn't want to. I wouldn't want to get in on his terms. They are wrong."

Fry's response is not unfamiliar. It is standard New Atheist fare, a recapitulation of Dawkins and others. He has such arrogance in his answer, though, it seems to take even the interviewer's breath away. Fry is confident that God cannot exist because of the horrible natural evil he sees in the world. Or if God does exist, he has a lot of explaining to do to Stephen Fry as well as to those poor bone cancer victims.


The Problem of Evil is Everyone's Problem

While Fry is railing against God, I wonder how he would answer the same charge using his own worldview. How would Fry offer comfort to the mother of a child with bone cancer within his understanding of atheism? Would he tell her, "Well, I'm sorry. Evolution is driven by natural selection of advantageous genetic mutation. Your child has a mutation, but it wasn't an advantageous one for her. She has to die, but that's OK. The more fit will leave more offspring." Given Fry's view, how can he say contracting bone cancer is unjust? It is the process of mutation in practice.2

Is Fry's answer better? If bone cancer is part of the evolutionary process, how can he label its existence wrong? Where does he get this definition of right and wrong from? If he wants no mutations of DNA at all, then he wants humans to evolve no further. Otherwise, things like pain, suffering, and parasites eating out the eyes of African children is just how the world works; right and wrong don't enter into it at all.

Interestingly, before this portion of the interview, Fry was commenting on his bipolar disorder. Byrne asks, "You say for all the pain that depression causes you, you wouldn't want rid of it because of the places it takes you, in terms of creative highs." Fry agrees and quotes W.O. Jordan who said, "Don't take away my devils because you'll take away my angels, too." He then tells Byrne how he can lead a high functioning, successful life that is fulfilling even with a mental illness.

So why is it that Fry can see good come from debilitation within his own life and he would resist the removal of the defect of bipolarism and yet he cannot open his mind at all to the possibility that God allows the evil we see in the world for greater purposes? Surely, Fry doesn't know so much that he can say with certainty how a world of free, fallen creatures would behave in a world where they never need to rely upon God for their safety, to ease their pain, or to appeal to a hope for the future.


The Luxury of Atheism for the Affluent

Andy Walton makes the same point concerning Fry and folks like the British Humanist Association. You may remember that Richard Dawkins and the BHA created an advertising campaign declaring "There's probably no God. Now stop worrying and enjoy your life."3 Walton comments such thinking is "aimed at a small, privileged elite of Western people in the 21st century." He continues:


Stop worrying, says Fry. Forget about God and life after death and finally you'll be free to enjoy life. Well, sorry Stephen, but if you take away God and the hope of a life to come, then the majority of believers you'll be ‘setting free' aren't privileged, Western people who'll be released into a life of self-gratifying loveliness. In fact, they are mostly poor, the majority are women and they are clinging onto their hope and faith for all that they're worth. Think of Christians in Syria, DR Congo or North Korea. Think of the hell on earth some them are experiencing. How dare Stephen Fry tell them that life would be so much better if they gave up on their silly faith.4

I think that's right. It's far too easy to assume the moral high ground and judge God when it suits you, but to provide answers from one's own beliefs, that's tough. If Fry wants to really make a convincing argument against God, he needs to come up with his own answer to the problem of evil, one that's better than the hope offered to those wounded children trough Christ.