Why would Gandhi reject Jesus? 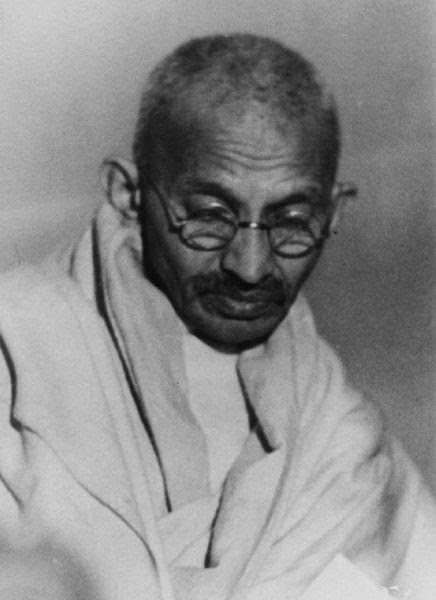 Earlier this week, I wrote a post about why mixing belief systems is dangerous. The post stemmed from an article in the Vancouver Sun that held up Mahatma Gandhi as "one of the most famous people to openly promote mixing religions." 1 But, I don't think Gandhi's mixing of faith helped him. In fact, I think it may have caused him to miss the central message of Christianity.

In An Autobiography: The Story of My Experiments with Truth, Gandhi discusses his various interactions with people of faith, his study of religion, and how it shaped his nonviolent resistance. He recounts in some detail his different conversations with Christians, and the impressions they made. He states the primary message of Christianity did not resonate with him:


One of the Plymouth Brethren confronted me with an argument for which I was not prepared:


You cannot understand the beauty of our religion.

From what you say it appears that you must be brooding over your transgressions every moment of your life, always mending them and atoning for them. How can this ceaseless cycle of action bring you redemption? You can never have peace. You admit that we are all sinners. Now look at the perfection of our belief. Our attempts at improvement and atonement are futile. And yet redemption we must have. How can we bear the burden of sin? We can but throw it on Jesus. He is the only sinless Son of God. It Is His word that those who believe in Him shall have everlasting life. Therein lies God's infinite mercy. And as we believe in the atonement of Jesus, our own sins do not bind us. Sin we must. It is impossible to live in this world sinless. And therefore Jesus suffered and atoned for all the sins of mankind. Only he who accepts His great redemption can have eternal peace. Think what a life of restlessness Is yours, and what a promise of peace we have.

The argument utterly failed to convince me. I humbly replied:

If this be the Christianity acknowledged by all Christians, I cannot accept it. I do not seek redemption from the consequences of my sin. I seek to be redeemed from sin itself, or rather from the very thought of sin. 2

The Miscommunication of Christianity

Most Christians might believe that the Christian did a decent job of sharing the gospel. However, I think he rushed it because he first didn't find out what Gandhi already believed about humanity and sin. Gandhi's Eastern background made certain assumptions about sin, the nature of God, and of human beings that are incompatible with Christian teachings. He tells us a bit later:


My difficulties lay deeper. It was more than I could believe that Jesus was the only incarnate son of God, and that only he who believed in him would have everlasting life. If God could have sons, all of us were His sons. If Jesus was like God, or God Himself, then all men were like God and could be God Himself. My reason was not ready to believe literally that Jesus by his death and by his blood redeemed the sins of the world. Metaphorically there might be some truth in it. Again, according to Christianity only human beings had souls, and not other living beings, for whom death meant complete extinction; while I held a contrary belief. I could accept Jesus as a martyr, an embodiment of sacrifice, and a divine teacher, but not as the most perfect man ever born. His death on the Cross was a great example to the world, but that there was anything like a mysterious or miraculous virtue in it my heart could not accept… From the point of view of sacrifice, it seemed to me that the Hindus greatly surpassed the Christians. It was impossible for me to regard Christianity as a perfect religion or the greatest of all religions.

I shared this mental churning with my Christian friends whenever there was an opportunity, but their answers could not satisfy me. 3

Gandhi was raised a nominal Hindu, but also had an understanding of Jainism. In both faiths, the law of karma applies and is inescapable. Good deeds are a credit to one's karmic account while bad deeds are a debt. One's own choices and actions are wholly responsible for the good or bad karma held against you. Therefore, the eastern mind would understand all sin as something someone can avoid by one's own power.4 Jainism specifically teaches that one can remove all their bad karma and become God. In fact, in Jainism the only Gods that exist are those humans who've rid themselves of their karmas5.

Given this background, one can see how the Gandhi's understanding of Jesus and the atonement would be confused. His explanation of his rejection makes perfect sense in an Eastern worldview, but completely misses the point of western theology.

Prior to this encounter, Gandhi writes that a friend challenged him to read the Bible. Because he had no background whatsoever with the Christian story, it didn't go well:


I began reading it, but I could not possibly read through the Old Testament. I read the book of Genesis, and the chapters that followed invariably sent me to sleep. But just for the sake of being able to say that I had read it, I plodded through the other books with much difficulty and without the least interest or understanding. I disliked reading the book of Numbers.6


Again, this isn't surprising. We understand that the story of Adam and Eve sets up the concept of man as a fallen creature, one incapable of being perfect on his own. The teaching is emphasized when Adam and Eve seek to don fig leaves for themselves but they're shown to be inadequate.

Let Gandhi's story serve as a caution to Christians today. We are living in a post-Christian culture and while the assumptions may be different, the gospel message may be just as foreign to Western secularists today as it was to Gandhi then. When you share your faith, you should assume nothing. Ask people what they believe about sin, justice, and God. Ask them if they think human beings can ever be perfect. Find out what they understand so you can provide the proper context for the biblical message. That's when true communication will happen.