Are Mormons Christians, too? 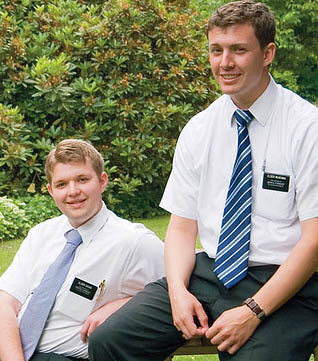 Last week, I had the opportunity to speak with a lot of Mormons during my trip to Utah. When we visited Temple Square, I spoke with a couple of Sister Missionaries who were giving us a tour of the facilities. Both sisters echoed the official Latter-day Saints claim that they were Christians even as I am. One said, "Of course we're Christians. We worship Jesus Christ just as you do. Even the name of the church is The Church of Jesus Christ of Latter-day Saints. So, we are definitely Christians."

This stance of the Mormon Church has always bothered me. In The Pearl of Great Price, considered to be sacred scripture by the LDS church, Joseph Smith canonized his account of the "first vision" of two personages (identified as God the Father and Jesus Christ) that supposedly gave birth to the church.1 Smith explains:


My object in going to inquire of the Lord was to know which of all the sects was right, that I might know which to join. No sooner, therefore, did I get possession of myself, so as to be able to speak, than I asked the Personages who stood above me in the light, which of all the sects was right (for at this time it had never entered into my heart that all were wrong)—and which I should join.

I was answered that I must join none of them, for they were all wrong; and the Personage who addressed me said that all their creeds were an abomination in his sight; that those professors were all corrupt; that: "they draw near to me with their lips, but their hearts are far from me, they teach for doctrines the commandments of men, having a form of godliness, but they deny the power thereof."2

Smith here clearly states that all the Christian denominations are "all wrong," "their creeds are an abomination," those that profess Christianity "were all corrupt," and they are denying the power of godliness. These are basically the harshest condemnations one could receive from God, and yet Mormons are steadfastly claiming "I'm a Christian, too!" If Mormons and the LDS church believe this vision is true and God really did day these things, then why on earth would they want their name associated with an apostate group whose beliefs are an abomination before the Lord?

To look at it another way, imagine that I was discussing my beliefs with a group of Wiccans. Further, imagine me stating, "I know that we disagree on the nature and character of God, but because I believe that God is responsible for creation and you do too, that makes me as pagan as you. I'm a pagan Christian!" The claim is not only nonsense, it would offensive to both the Wiccans and it would be offensive to Christianity. Paganism is the opposite of what Christianity teaches, just as the Mormon view that man may become God is the opposite of Christianity's transcendent Creator.

Christianity throughout its history has faced heresy and apostasy. Jesus warned his followers to ""Beware of false prophets, who come to you in sheep's clothing but inwardly are ravenous wolves" (Matt 7:15) and Paul cautions the church in Galatia that "even if we or an angel from heaven should preach to you a gospel contrary to the one we preached to you, let him be accursed" (Gal 1:8). Jesus and Paul were exclusivists; they held — and the early church codified — there are certain beliefs that identified someone as a Christian. If one rejects any of those essential beliefs, they must be excluded and considered not a Christian.

While the LDS church likes to use the line "we're Christians, too," it doesn't mean it's true. Perhaps they can gain some PR or a sympathetic listen from a potential convert, but Mormonism is as far from Christianity as I am from becoming a God myself. Why they would claim such is disingenuous and insulting to both their beliefs and to mine.

1. There exist a lot of conflicting accounts about this first vision in documents written both before and after the one included in The Pearl of Great Price. This has caused many scholars to doubt that Joseph Smith repeated the story consistently. For a few of these, see Tanner, Sandra. "Evolution of the First Vision and Teaching on God in Early Mormonism" Utah Lighthouse Ministries. Web. 8 Nov 1998.http://utlm.org/onlineresources/firstvision.htm Accessed 3 July 2014.