Boys don't want to slap girls. At least that's what the popular YouTube video entitled "'Slap her': Children's reactions" shows. Produced in Italy, the short clip shows several boys aged 10 to 11 in front of a young girl where they dutifully perform requests such as "make a funny face" or "caress her" from an off- camera voice. However, when each is told "slap her", none comply. When asked why they won't slap her one says, "Because you're not supposed to hit girls!" while another replies "I don't want to hurt her."1 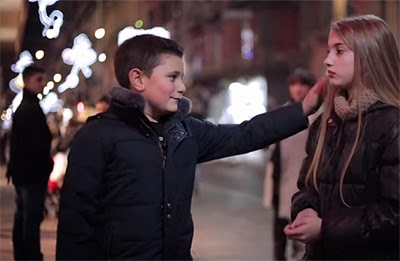 I applaud the boys for not hitting the girl. It's decent; and I've given the same instruction to my boys. However, I worry that the video doesn't prove what it sets out to. In fact, I think that the underlying assumption is more problematic than meets the eye.

The video has been promoted as a demonstration that violence against women is wrong. ABC News's San Francisco affiliate wrote "Italian media company fanpage.it created the video to show how both violence and pacifism can be taught at an early age."2 But what does it show? Of course, pre-pubescent boys after being instructed to tell a girl how pretty she is and to stroke her don't then follow instructions to slap her. Is that a surprise?

Juxtapose this to this is the famous Milgram experiments. These are well-known experiments in psychology where people believed they were administering electric shocks to participants (really actors pretending to hurt) and when commanded, they would obey authorities even to the point of sending a shock that could be fatal.3 While Milgram's experiment had some flaws, a more recent iteration proved that people were more than willing to obey an authority who told them to provide a painful electric shock to a stranger. The study found "People who were normally friendly followed orders because they didn't want to upset others, while those who were described as unfriendly stuck up for themselves."4


Commands in Isolation are Not Beneficial

I think both findings show the flaw in moral commands that are not grounded in a larger worldview. The Italian video may be trying to say that young children don't want to slap girls by nature, but that isn't necessarily true. Kids who know and disagree with one another will get into fights all the time, and unless specifically instructed by a parent, may slap someone of the opposite sex. Also, they obviously are taken with the pretty girl and hitting her wouldn't make sense. But Milgram-type experiments do show that some people are more than willing to inflict pain when ordered to do so.

The kids seemed to understand that hitting a girl is wrong because boys are stronger than girls and could do more damage to them. Men do have significantly more muscle mass than women, leaving women much more vulnerable in a confrontation between individuals of opposite sexes. Yet, in today's "biology doesn't matter" culture, we're told the differences between the sexes don't matter, except when they do.

More broadly, what our kids require is not simple rules, but an understanding of the value of human beings and why men shouldn't hit women. The Christian world view teaches that anyone who is in a position of strength—be it physical, financial, or influential—should not use that position to take advantage of another person made in the image of God. It is through Christianity that we understand the equality of all people and it gives us good reasons for acting civilly towards one another. In fact, such an approach also tells us that women are as valuable as men in our society and therefore should be held in high regard.  But when right and wrong are reduced to whatever the adult or some authority figure says, people may be manipulated to do horrendous things, as Hitler's Germany has proven.

I don't know if the kids in the video understood the full moral grounding of why we shouldn't hit a girl. In the video, one boy responded that "Jesus doesn't want us to hit others," which isn't a bad answer. But as parents, we need to teach our children not simply what to do and not do, but how all of that relates to the larger picture of God and man. Once that foundation is established, individuals are less likely to be swayed, and are better equipped to weigh their actions in a variety of contexts, making better decisions even in unforeseeable situation. Isn't that how we want to rear our children?