Is the Bible Reliable Since Its Been Translated So Many Times?

When Google's translation page first came out, some friends and I would have a little fun translating the web page of our employer from English into another language like French or Japanese. We would then copy that text and paste it back into the Google translator and let the computer try to recreate the English. The final result was awkward and would produce pretty comical phrasing, with words implying something completely different from the original message.

The reason we attempted such silliness is to try and intentionally confuse the translating robot. We knew that churning out a translation of a translation would force mistakes to be multiplied, a realization that takes no scholarship at all. Yet, this is the way many people assume the scholars responsible for our modern bibles have worked. Yesterday, a gentleman at my church said he had been in a conversation with a Muslim who said, "Your Bible has been translated so many times challenged by a Muslim on the validity of the Bible as it compared to the Qur'an." This isn't an uncommon claim and many atheists and non-believers have tried to make the same point. 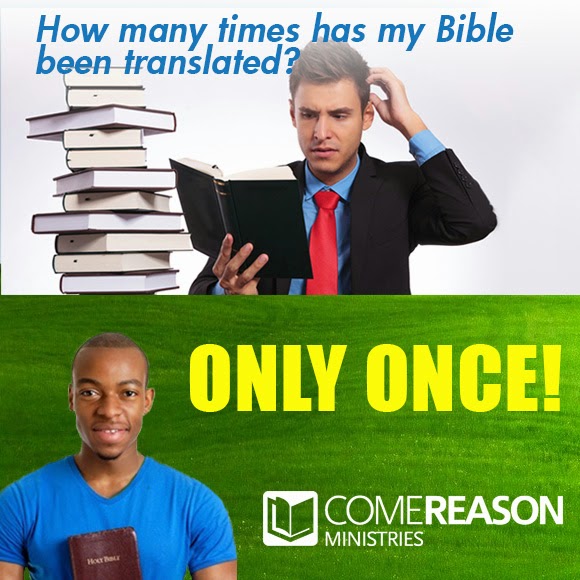 Take the Newsweek cover story published just two days before Christmas entitled "The Bible: So Misunderstood It's a Sin." The article, which seems to take as its goal the undermining of biblical authority, is rife with inaccurate assumptions and misunderstandings about how biblical scholarship works. Interestingly, its very first criticism is at the problem of multiple translations. Author Kurt Eichenwald, under the heading "Playing Telephone with the Word of God," writes:

That's the thinking that many people have. yet this perception is so incredibly wrong it takes my breath away. But Christians seem to not know how to respond to such accusations, as the question posed to the man at church shows.


Counting Up the Number of Translations to You

The first thing I emphasize when tackling the objection that we are somehow insulated from the real meaning of the Bible because of so many translation is to simply ask, "how many times do you think the Bible version you have has been translated from its original languages?" People are feign to guess, imagining perhaps ten, dozens, or more. The reality is that every modern Bible translation has been translated exactly once from the original Greek and Hebrew. Once. That's all. There is no "translation of translations of translations." Biblical scholars work directly from the Hebrew and Greek texts to create the English versions we have today. Eichenwald could have seen that if he had bothered to look at the prefaces to any Bible. Here's what the Translation Committee for Crossway, which publishes the English Standard Version states:


"each word and phrase in the ESV has been carefully weighed against the original Hebrew, Aramaic, and Greek, to ensure the fullest accuracy and clarity and to avoid under-translating or overlooking any nuance of the original text."2

Here's what the Lockman Foundation, who created the New American Standard Bible says:


The New American Standard Bible has been produced with the conviction that the words of Scripture, as originally penned in the Hebrew, Aramaic, and Greek, were inspired by God… At NO point did the translators attempt to interpret Scripture through translation. Instead, the NASB translation team adhered to the principles of literal translation. This is the most exacting and demanding method of translation, requiring a word-for-word translation that is both accurate and readable. This method follows the word and sentence patterns of the original authors in order to enable the reader to study Scripture in its most literal format and to experience the individual personalities of those who penned the original manuscripts.3


In 1965, a cross-denominational gathering of evangelical scholars met near Chicago and agreed to start work on the New International Version. Instead of just updating an existing translation like the KJV, they chose to start from scratch, using the very best manuscripts available in the original Greek, Hebrew, and Aramaic of the Bible.4

And just to show that this translation approach is not something that only began recently, here's what the translators wrote in the preface to the original 1611 King James Version:


That out of the Originall sacred tongues, together with comparing of the labours, both in our owne and other forreigne Languages, of many worthy men who went before us, there should be one more exact Translation of the holy Scriptures into the English tongue; your MAJESTIE did never desist, to urge and to excite those to whom it was commended, that the worke might be hastened, and that the businesse might be expedited in so decent a maner, as a matter of such importance might justly require (emphasis added).5