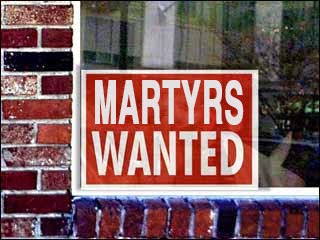 A few weeks ago, I had responded to a meme (here and here) posted by atheist Michael Sherlock that claimed, "Christianity did not become a major religion by the quality of its truth, but by the quantity of its violence." Sherlock has attempted to reply to one of my arguments, but I think he falls short in numerous ways. Two primary areas where he gets both history and the argument wrong are 1) the concept that Christians somehow solicited people for martyrdom in order to attract followers and 2) the argument that since Christians were the recipients of violent acts, it somehow justifies his meme. I will deal with the first today and tackle the second tomorrow.

Sherlock makes the claim,  "We have records that testify to early Christian Church officials and fathers, encouraging many of their followers to provoke the Roman authorities and submit themselves to the violence of voluntary martyrdom, in the oft times realized hope that they might be martyred in public spectacles and thereby increase the popularity of the early Church."1That's a huge claim. Sherlock ascribes very specific and sinister motivations to the early church fathers; however he fails to produce a single document from antiquity that spells out such a plan or goal. His first stab at evidence is to quote Chapter II from The Martyrdom of Polycarp where the church fathers of Smyrna (Sherlock incorrectly attributes the passage to Polycarp himself) recount the pattern of prior martyrs for the faith and concludes:


And so like lambs, a number of the more gullible Christians of the ante-Nicene period, were sent out amongst the wolves to be slaughtered for their leader's ambitions, with the hope that the fires would be cool to them and that they, as willing martyrs for their unfounded and credulous faith, acting 'imitatio Christi,' would be afforded an opportunity to commune with Christ himself and attain a free-ticket into a non-existent heaven.2

Christians Did Not Solicit Martyrs

Sherlock's dogged misunderstanding of the text shows in many ways (you may read the passage here in context). First, this wasn't written as an appeal to action. The letter is entitled "The Martyrdom of Polycarp" and was written to explain just that. It seeks to place martyrdom in its proper Christian context and labels martyrs of that past as heroes of the faith. This is as natural as any nation reporting stories of those who laid down their lives for an ideal. But if Sherlock would have read just a bit further, he would have seen that the letter explicitly argues against promoting martyrdom for the sake of martyrdom. Just 115 words later in chapter four it recounts that a Phrygian man named Quintus who sought voluntarily martyrdom, but when he saw the fate awaiting him he apostatized instead. The letter then admonishes the Christians, "Wherefore, brethren, we do not commend those who give themselves up [to suffering], seeing the Gospel does not teach so to do."3 This statement is of course in direct contradiction to Sherlock's thesis.

Secondly, it wasn't "more gullible Christians of the ante-Nicene period, were sent out amongst the wolves to be slaughtered for their leader's ambitions." Polycarp was the one martyred! He was the leader of the church of Smyrna and therefore it would be hard pressed for his martyrdom tom result in his own ambitions somehow being met. The charge is wholly without merit and Sherlock offers not a scrap of evidence to corroborate his conjecture. It is fabricated out of whole cloth, and I do think using the epithets "gullible," "leader's ambitions," and "credulous" is simply Sherlock exercising the fallacy of poisoning the well.

Lastly, Sherlock seems to conflate his religions. Christianity in no way teaches that martyrdom provides any such favored status as a "free-ticket to a non-existent heaven." In fact, by Polycarp's own writings we see that he endorsed Paul's view of salvation as having already been received by the believer when he endorses Paul's epistle to the Philippians. In Chapter three, Paul spells out how no work of the flesh can gain one access to heaven, but only "that which comes through faith in Christ, the righteousness from God that depends on faith." Sherlock seems to think that Christian theology teaches something akin to Muslim beliefs, a position that is demonstrably false.

In hoping to justify his broader claim that Christians were trying to coax people to become martyrs in order to attract new followers, Sherlock quotes a few other sources, including the following passage from Henry Chadwick:


Voluntary provocative martyrs were easily engendered by promises of celestial joy. In the 190s Clement of Alexandria deeply disapproved of aggressive voluntary martyrs. Their attitude seemed to the emperor Marcus Aurelius, a Stoic defender of suicide, 'theatricality' in poor taste. Cyprian of Carthage under persecution in 250–8 also united idealized language about the martyr's crown with express disapproval of voluntary self-destruction.4

I believe that Sherlock is hoping one would read the first sentence and ignore the rest. Sherlock himself ignored the sentences just before his quote which places that paragraph in context:


Ignatius was writing in haste under difficult circumstances, and his language did not always convey precisely what he wanted to say. The language used would be surprising at any decade of the second century. The confrontation with imminent martyrdom profoundly affected him, and the impression can be given that a proper willingness to die in union with Christ has passed into a neurotic will to die.

Voluntary provocative martyrs were easily engendered by promises of celestial joy. In the 190s Clement of Alexandria deeply disapproved of aggressive voluntary martyrs. Their attitude seemed to the emperor Marcus Aurelius, a Stoic defender of suicide, 'theatricality' in poor taste. Cyprian of Carthage under persecution in 250–8 also united idealized language about the martyr's crown with express disapproval of voluntary self-destruction (emphasis added.)5

So here we have Chadwick explaining how Ignatius' letter may be misunderstood because of his duress and that he would disapprove of voluntary martyrs because other Christian leaders such as Clement of Alexandria and Cyprian of Carthage had also explicitly disapproved of such, too! Add that to the admonition in The Martyrdom of Polycarp cited above and we have a consensus in the sources that Christian teachers disdained unprovoked voluntary martyrdom. These are Sherlock's own sources, and they argue specifically against his point.

I'm certain that Christians being covered in pitch and lit on fire for to provide light to Nero's garden were not congratulating themselves. I'm certain that when Diocletian ordered the arrest and imprisonment of all bishops and priests, along with the confiscation or destruction of all church assets that these leaders did not benefit. Sherlock has taken small slivers of historical text and filled them with a 21st century new atheist viewpoint. There is real violence demonstrated in Sherlock's post; unfortunately, it is to history and to the texts themselves. Tomorrow, I will show how even if we grant Sherlock's first premise, it doesn't save his meme.