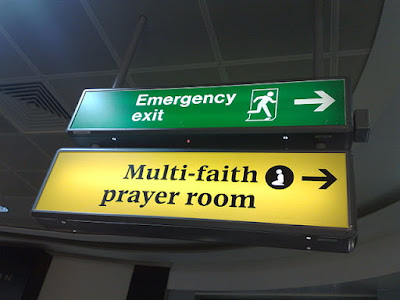 Is it bigoted to claim that Christianity is the exclusive way God desires humanity to approach him? Many people think so, citing the importance of being tolerant of others' beliefs. But to simply allow a lot of different religious systems exist within a society would be a culture that allows for religious liberty or religious diversity. Episcopal Bishop John S. Spong has stated, "The idea that Jesus is the only way to God or that only those who have been washed in the blood of Christ are ever to be listed among the saved, has become anathema and even dangerous in our shrinking world."1

In today's parlance, tolerance doesn't mean we should allow others to practice their faith even though we believe it is false. Rather, it is interpreted to mean all religions are equally true or worthy. That seems to be the positon taken by Scotty McLennan, Dean of Religious Life at Stanford University, who preached a sermon entitled "Religious Pluralism as the Truth" at Stanford Memorial Church. He opened that message by declaring:


There are many roads to the top of the spiritual mountain. There's not just one way through Jesus Christ. As a Christian pluralist, I personally affirm Jesus as my way, as my Lord and Savior, but I also believe that the exclusivist claim is wrong. I have no doubt that Jesus sits at the right hand of the Father, at least figuratively speaking, but I believe that Moses, Muhammad, Krishna, the Buddha and Socrates do too, among others. They're all there at the top of the metaphorical spiritual mountain — they are all the way and the truth and the life — and no one comes to the Father except through a multitude of them, or by having walked in many footsteps, or by being in a large presence (whether one fully realizes that or not).2

I wonder just how carefully those who hold to such a view have considered their position. It seems to me that to hold the idea of equal worth of all religious faiths, one is forced into one of three positions: all faiths are true, all faiths are false, or the very concepts of true and false are meaningless. I'd like to look at these one at a time and see if they make any sense.


Knee-jerk Pluralism — "They're All True"

The first way one may intend the statement all religions are "way and the truth and the life' would be to make the claim that all religions are equally true. This may be what Dean McLennan is asserting above. However, as I demonstrated in a recent article, such claims make no logical sense. God cannot be the Christian's Triune deity and the Muslim's monadic deity and the Advaita's brahman (the non-personal ultimate soul of the universe3) as well. These are simply contradictory claims and logic tells us it is unreasonable to believe contradictions.


Sophisticated Pluralism — "They're All False"

Sometimes academics will recognize the contradictory nature of different faiths, but still hold a sincere belief that all religions offer the same worth. They are simply trying to communicate that all religions are in fact feeble attempts to express our approach to the divine. In other words, religions are simply cultural developments to explain the unknown or to establish certain moral guidelines and frameworks for the benefit of their particular society and the true reality is simply unknowable. One proponent of this view is philosopher John Hick who writes, "We cannot attribute to the Real a se any intrinsic attributes, such as being personal or nonpersonal, good or evil, purposive or nonpurposive, substance or process, even one or many… It is only as humanly thought or experienced that the Real fits into our human categories."4

This strikes me as an equivocation. It isn't illogical to hold the possibility that all faiths have it wrong, but it doesn't explain anything. It leaves us as agnostics who want to feel the warm-fuzzies of transcendence. But if everything is wrong, why should anyone believe there's a transcendent reality at all? Also, I don't think such a position takes the details of faith seriously enough. There are reasons why I am a Christian, good solid, rational reasons. Those should not be dismissed so easily.


Religious Relativism — "There Is No Truth"

The last option for the pluralist is to simply discount the notion of religious truth altogether. Alister McGrath summed up the view with the question, "How can Christianity's claims to truth be taken seriously when there are so many rival alternatives and when 'truth' itself has become a devalued notion? No one can lay claim to truth. It is all a question of perspective."5 Such a person would hold there is no way anyone can tell what is true since truth is different for each person. Therefore, beliefs are a personal matter based on the holder's perspective and they become true for that person.

However, to hold this is to become a relativist and give up any idea that statements of God have any significance at all. We cannot ascribe the existence of the universe, why there's something rather than nothing to God because we cannot make any meaningful statements about God that would be objectively true. The problem becomes in the grounding of the belief that "No one can lay claim to [religious] truth." How does the religious relativist know that claim is true? That strikes me as a claim about ultimate reality that applies to all people. How can one be so sure this belief objectively holds and then dismiss all other ultimate claims about reality as preferences and not objective?

Each of the three different approaches one must take to hold to religious pluralism fails in some way. Thus, exclusivist claims about religion are a much more rational position to hold.