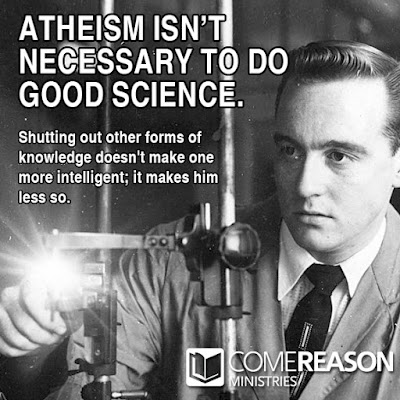 I recently listened to an interesting conversation between Alister McGrath and Jim Al-Kalili on the Unbelievable! podcast. Both guests have an extensive science background and had a very thought-provoking exchange. While McGrath is a Christian apologist Al-Kalili is a theoretical physicist, radio host, and president of the British Humanist Association.

One key point that McGrath mentioned on the program is the assumptions people take from the scientific enterprise. For example, I've spoken with many atheists who say in order to "do good science" one must assume atheism. They then conclude that science is itself an atheistic enterprise and they believe science and faith are then set against one another. But this is actually sloppy thinking, as McGrath pointed out, and it misses a key distinction.

McGrath makes the point that science does adopt a certain methodology in its discipline, what is known as methodological naturalism. In other words, science approaches its exploration of the world as if the answers can all be found by uncovering various natural laws and functions. Scientists take this approach because it forces them to dig deeper; asking the "why does this thing function in this way" helps us investigate the natural world more completely.

However methodological naturalism is just that: a methodology. It's an assumption the scientist makes as he approaches his work.  This assumption, just like any other, has limitations and cannot inform us of other questions which may be equally relevant.  As an illustration, think of a forensic scientist. A forensic pathologist can study a body and determine the cause of death. Perhaps the victim's heart gave out under extreme stress. What the pathologist cannot do is say whether the person was under stress because of an emotional crisis at home, because the victim was exercising to try and get into shape, or because the victim was under duress by being held at gunpoint. The mental state of the victim is out of reach to science. Even if it is shown that the death was caused by another party, motive for the crime cannot be shown scientifically. The detectives must employ methods other than naturalism to uncover those.

This is where most atheists who make the claim that science and faith are at odds go wrong.  They jump from science assuming a methodology of naturalism to the existence of God Himself. That's an unwarranted leap. Existence is a question of ontology, not methodology. That is it is a question of existence.  As McGrath stated, "By definition, a research method can uncover some things and not others, and this is the method that science uses. But we have to be very careful we don't conflate that into a view of reality." That would be like a shopkeeper believing that since his inventory shows negative two widgets, he is in possession of widgets made out of anti-matter! The method of inventory is not the same as the reality.


Weighing Science Along With Other Forms of Knowledge

To claim that science is atheistic is to confuse methodological naturalism with philosophical naturalism, a mistake thinking people should never make. A more thoughtful approach to questions of truth and reality is to take those findings we understand through scientific discovery and see how they fit with all the other ways we can know things. Like the detective, we must gather our facts about the world from more than just the science. We must weigh all the evidence we have and see if we can draw an inference to the best explanation from them. Shutting out other forms of knowledge doesn't make one more intelligent; it makes them less so.