The Cruelty of Karma

Yesterday, the Apologetics Missions Team went to visit the Temple of the International Society of Krishna Consciousness (more commonly known as the Hare Krishnas) in Berkeley. This is one strain of Hinduism that teaches the ultimate reality of the universe is a "supreme all-attractive person" whom they call Krishna1 and the devotees of ISKCON believe that all living beings should place their focus of worship on Krishna as the way to help them attain enlightenment and escape the cycle of life, death, and rebirth. 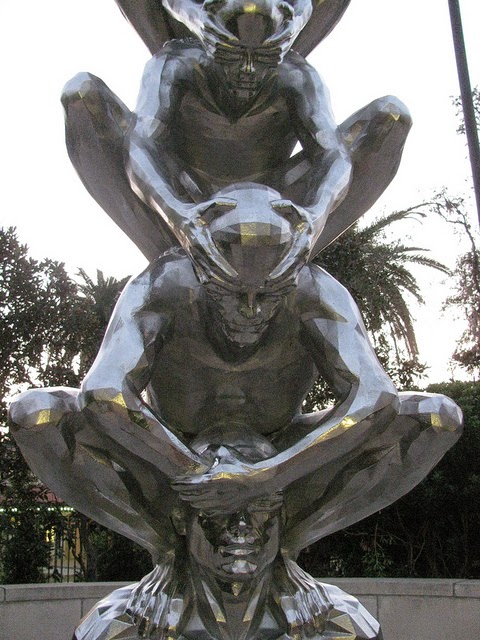 As a school of Hinduism, this isn't all that uncommon. While there are many gods and demi-gods in Hinduism as well as a wide variety of practices and rituals designed to please and appease them. However, one thing common to all forms of Hinduism (as well as Buddhism) is the concept of karma, and the cycle of rebirths. The concept has been sometimes misunderstood in the West, so let me take a moment to explain it.

There are some fundamental questions of life that all faith systems try to answer: where did we come from, what happens to us after we die, what does this life mean, and what about all the evil and suffering we see in the world. Hinduism from its ancient roots answers these through their doctrine of karma. Karma is a fundamental principle of existence. Basically, karma teaches that for every action there is an effect. If you are kind to another, that may get you closer to the Ultimate good and advance you toward enlightenment. If you are mean or evil, you instead accumulate karmic debt that will be paid back in some way. Sometimes this plays out in the same life where the deed occurred mostly this karmic debt is paid back to you in subsequent lives.2

This is the way the Krishnas explain why bad things happen to good people, and how despots who caused tremendous suffering and then died will ultimately be repaid for their evil. It could take thousands of lives to pay back the karmic debt amassed by Pol Pot during his time running the Khmer Rouge. And since no one is perfect, it takes us thousands of lives to rid ourselves of the more mundane debt we build for lying or being prideful.


The Problems of Karma

I think one of the more attractive features of karma in its surface is the idea that no bad deed will escape judgment. Whatever is done has an effect. It seems fair; yet the concept of karma is a horribly cruel one if you think about it for a moment. First of all, karma is the way the Krishnas explain why the loving father contracted cancer or the generous retired couple lost their home during the financial meltdown. It wasn't really their fault in this life. They were evil in a previous life and their bill had come due.

But no one ever knows what specific evil was perpetrated that would subject the sufferer to such a sentence. How does this karmic justice help the victim improve? How can he or she learn to not again do the things that initiated the karmic retribution? The answer is unknowable. Cancer doesn't point to a specific evil act that must be corrected. Thus even the devoted follower must try and guess what rule he broke to receive such a heavy punishment, and it is highly likely he will guess wrong. How does this help anyone achieve enlightenment?

Secondly, karma offers no real comfort. One guide at the Temple explained to us that if a young couple has a child who dies shortly after birth, that was her karmic cycle. The baby needed just a short time in the material world to become that much more improved so it could move onto a different plane. Thus, the Krishna devotee will turn to the grieving parents who are asking why their child died in innocence and say "karma, karma." She stated "that is all the answer there is." It truly seems to be hollow idea, since it is the karma itself that is now causing pain and suffering in the lives of the parents! How can a law of justice be so cruel? How does karma itself pay its own karmic debt? These questions are never answered.

Our guide also told us that because of karma one must be careful of even good intentions. A man was asked by a relative to donate blood for that relative's operation. The teacher admonished the man against doing so. According to our guide, "He said to him, ‘Do you realize that in order for that man to pay you back the debt of you giving him your blood, you would need to somehow be in a life-threatening situation where you would now be the one who needs the blood donated!" The guide summarized the concept with the colloquialism "No good deed goes unpunished."

The ISKCON law of karma is not about justice, it's about stasis. No one owes anyone else anything, all is in balance. But kindness doesn't need balance. Goodness doesn't need to be repaid with sickness. Karma, this ultimate law, would itself be evil if it were true. That's why the Christian concept of justice is superior to the ISKCON one. Christianity teaches that God did not leave us to suffer whatever consequences we may have coming to us, and force us into an innumerable series of lives to suffer through until we get it all right. God sent his son to take our debt upon himself. He suffered so we don't have to and he rose from the grave, proving that he did indeed defeat death.

No, karma is not a good concept. It offers no real hope, and says suffering will continue in your life. That's not justice; that's unfeeling oppression.