I'm in the middle of leading a group on an Apologetics Missions Trip to Berkeley, CA. One of the things we do on these trips is to invite prominent atheist speakers to come and address our students. They will speak on a topic and then we have a time of Q &A so the students can probe the atheist worldview and see how well it can support itself a cohesive theory. 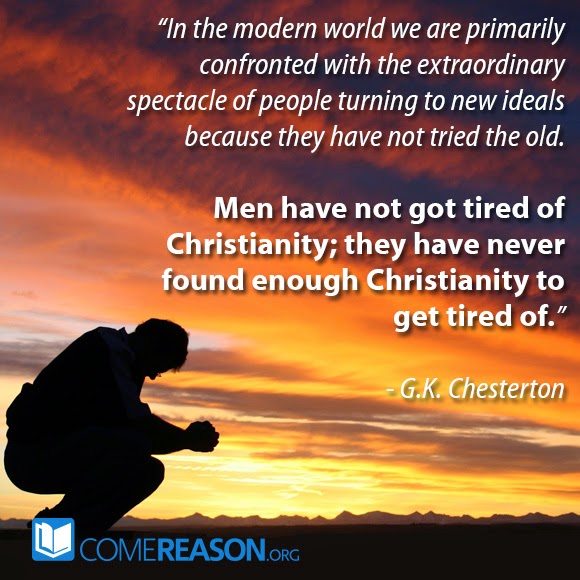 We've had a couple of different speakers present so far on this trip. Both gentlemen said they had been raised in traditional Christian homes and both said they left Christianity because it simply didn't make sense to them. The first speaker was raised a Southern Baptist, but at the age of twenty lost his Christian faith. Most of the reasons he offered for this were personal; he had built up an arsenal of ways to argue with Mormons or Muslims about why those faiths were untrue and engaged in these types of personal debates throughout high school. When a woman confronted him and told him that Hinduism was a much older faith than Christianity, he first went into debate mode. Just as he was getting ready to tell her she was wrong, he stopped, realizing that he didn't really know if Christianity or Hinduism was the older faith. This caused immense doubt in him about Christianity; he was stating facts that he didn't know and in his mind Christianity became just as fake as all those other faiths.

The Christianity he described turning away from was foreign to me. For example, he said that he felt closer to people as an atheist, stating "I no longer looked at people and thought, 'You're going to hell,' or 'you're part of my group.'" That isn't what Christianity is. It isn't about being in the right club or if you can take down someone else's beliefs. It is first and foremost recognizing that you are a sinner who needs to reconcile yourself to a holy God.

Our second speaker told us of how he was raised in Christianity by church-planting parents. He volunteered, started urban youth programs, and even went to seminary. Yet, he said that he never felt he had any type of personal relationship with Christ. In fact, the idea seemed foolish to him. He saw Christianity as being a good person and treating others with kindness. He fought for civil rights of African Americans during the civil rights movement in the 1960's, and he objected to the killing in the Viet nam war. But when he discovered that family members who taught him that "Jesus loves the little children, black and yellow, brown and white" were also themselves racists, he decided that he could be good without the need for what he called "the extra layer" of religion.

As you can see, he too missed the central aspect of Christianity. He thought being a Christian was being good and treating other well. He never talked of his own sin or his need to reconcile himself to his creator.

I find it interesting that both atheists reviled an impostor Christianity. I can understand their discontent; if Christianity is only keeping rules or winning arguments it would make sense that it feels fraudulent or superfluous. But that isn't what Jesus taught. His focus was always on how to reconcile human beings to the God who loves them. People will by nature choose their passions over God's holiness, yet God still seeks to bring them back to Himself while still remaining holy! A completely holy God cannot let any sin go unjudged. That's why Jesus came to die for us, so that the judgment of our sin may be met and we can still enter into that relationship with God.

I quoted Pascal in yesterday's post where he said, "it is equally dangerous for man to know God without knowing his own wretchedness, and to know his own wretchedness without knowing the Redeemer who can free him from it." As you can see from my experiences above, he was right. Apologetics without the cross helps no one.
Posted by Lenny Esposito at 7:45 AM
Labels: apologetics, atheists, faith and works, missions trip, witnessing