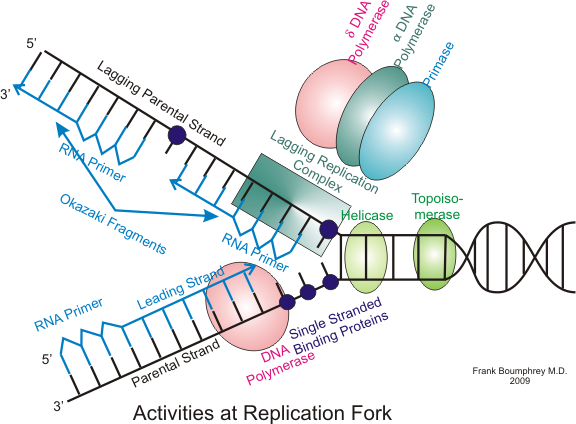 DNA replicates itself. That is Biology 101. The process is quite complex and any biology student required to rattle off the procedure on an exam can confirm. Although there are separate kinds of topoisomerase,1 they perform the same essential function within the process of replication.

In each human cell, there are approximately 2 meters of DNA compacted within a nucleus of the diameter of about 10 micrometers.2 For perspective, imagine that the nucleus is represented by a standard basketball. The length of all the DNA compacted into the ball would go round-trip between the earth and the moon just shy of twice. Topoisomerase has the job of ensuring that the shape of DNA is manageable. Add in the fact that DNA is not just a helix, but a double-helix. As one might imagine, the task of trying to do anything productive with this material presents very serious concerns that need to be dealt with. During replication, the topology (i.e. the shape and structure) of DNA and the movement in unzipping result in issues like tangling and kinking, so the process faces a formidable and complex challenge of bioengineering.3 It’s topoisomerase’s job to alleviate those issues so they don’t halt the replication process.4 If DNA cannot replicate, then an organism cannot grow. Additionally, DNA doesn’t just unzip for replication. It unzips in a process called transcription, which, with the help of RNA, is the first half of producing vital proteins in the cell.

Two examples might help illustrate some of the mechanical concerns that arise. Without even trying, the ordinary use of a wired phone produces coiling in the helical cord. No extraordinary spinning or energy is required to produce the effect, but it doesn’t take long for the cable to go from fresh and neat to knotted spaghetti, which seem to never come out. Even if the tangle is gone, there always seems to be a small bend or a missing turn were the tangle was. The second illustration may serve to demonstrate the problem of kinking just prior to cutting the DNA strand in two. To demonstrate the concept, you can take a piece of twine and try to unwind it by pulling away both its twisted strands away from each other. A "Y"-shape forms: the two strands being pulled apart are each the top segments of the "Y" and the rest of the twine is the bottom. Now at some point, enough tension will build up at the center of the "Y" to where you can no longer pull the strands apart. Fortunately, topoisomerase is there to work out these sorts of problems. Its process is so vital and complex that some have referred to topoisomerase as the "magicians of the DNA world"5 because of their uncanny ability to manipulate the DNA strand and master its topology.


The Problems for evolution

1: Does not fit early evolutionary models for an ancestral topoisomerase

It is still unclear how exactly topoisomerase originated on an evolutionary model, particularly because all the different types of topoisomerase appear to have originated independently of one another.6 A core tenet of evolutionary biology is that all life can be traced to a common ancestor (more technically, LUCA: last universal common ancestor). It is natural to assume that LUCA would have some master topoisomerase that would have developed into the varying domains7 of natural life: Achaea, Bacteria, and Eukaryota. But, this seems to be an incorrect inference that does not align with the actual data.8  It is speculated that topoisomerase might have emerged with either an ancient viral lineage or a LUCA that began with RNA genetic information or a combination of the two.9

These RNA-infused models would be controversial, because such scenarios involve the already contested10 (among researchers in that field) RNA-world hypothesis for the origin of life. And, the progressive introduction of topoisomerase and other necessary replication proteins into the evolutionary lineup seems an inventive proposition, but requires massive amounts of biological informational leaps that are unfounded, especially within the limited time window for the emergence of life on earth that evolution demands.

Most of all, the origin of topoisomerase presents a chick-and-egg paradox. To replicate itself the DNA molecule needs topoisomerase to unwind it. And, DNA would need to code for a protein to do the unwinding (in order to pass on the genes to code for topoisomerase). It’s like having a car with no gas. You need to drive to the gas station to get gas, but you need gas to get to the gas station. DNA might have obtained topoisomerase from somewhere else, but the instant it makes a copy of itself, the other strand needs topoisomerase also. The scenario requires the leap to the reality, where DNA actually codes for this protein itself. That is not to mention that the actual mechanics of unwinding get even more complicated, because topoisomerase is able to cut and re-join small sections of DNA, which require precise biochemistry to ensure the right pieces get linked back up with each other and at the proper speed. Too slow, and the DNA doesn’t unwind fast enough for cell division (mitosis) and the cell dies before replication can occur.12 Too quickly, and the cell can set off its own self-destruct sequence (apoptosis) or cause irreversible damage to the genes that results in cancer.13

Lastly, it is also important to keep in mind that this is only a piece of a wider issue for evolutionary biology to explain DNA replication in general: proteins that function as stabilizing clamps, ones that actually unzip the DNA strand, others that error-check the new copies, or the fact that one side of the DNA is duplicated backwards and in sections…

1. For the sake of simplicity, all types of topoisomerases will just be noted as 'topoisomerase'.
2. Joseph E. Deweese and Neil Osheroff, "The DNA cleavage reaction of topoisomerase II: wolf in sheep’s clothing," Nucleic Acids Research 37, No. 3 (2009): 738-748.
3. Ibid.
4. James J. Champoux, "DNA topoisomerases: structure, function, and mechanism," Annu Rev Biochem 70 (2001): 369–413.
5. James C. Wang, "Cellular roles of DNA topoisomerases: a molecular perspective," Nature Reviews Molecular Cell Biology 3 (June 2002): 430-440. Wang also makes use of this phrasing in his conclusion of his ‘Minireview’ in "Topoisomerases: Why So Many?" in The Journal of Biological Chemistry vol. 286, 11 (April 1991): 6659-6662.
6. Patrick Forterre and Daniele Gadelle, "Phylogenomics of DNA topoisomerases: their originand putative roles in the emergence of modern organisms," Nucleic Acids Research (2009), 1. The two coauthored a similar article with Simoneta Gribaldo and Marie-Claude Serre, called "Origin and evolution of DNA topoisomerases," in Biochimie (April 2007): 426-446.
7. A domain is the largest formal classification of living organisms on earth. By contrast, a species is the smallest formal classification.
8. Forterre and Gadelle, 1, 12 (and throughout the article in fact).
9. Ibid.
10. Patrick Forterre, one of the authors mentioned in this article, notes the RNA-world hypothesis, but references its implausibility on page 146 in the chapter entitled Origin and Evolution of DNA and DNA Replication Machineries of "The Genetic Code and the Origin of Life," published by Kluwer Academic and Plenum Publishers. Jonathan Filée and Hanny Myllykallio.
11. This paradox seems lost on some. The article by Allyn J. Schoeffler and James M. Berger entitled, "DNA topoisomerases: harnessing and constraining energy to govern chromosome topology," Quarterly Reviews of Biophysics 41, 1 (2008): 41–101, puts forth: "Understanding topoisomerase specialization is necessary to illuminate the evolutionary interplay between supercoiling homeostasis and the requirement for multiple topoisomerase activities to shepherd DNA through transcriptional, replication, and recombinational processes." The authors acknowledge that topoisomerase is subject to the mechanisms of evolution. How exactly does a mechanism necessary for evolution to work – even at the basic level – get thrown into the mix if it’s not functional with the first strand of DNA? That is not to say that it cannot improve or adapt with time, but it must work from the onset to begin with. And not just it, but DNA and its other requisite enzymes and processes.
12. Deweese and Osheroff, 741-742.
13. On the other hand, however, the essential nature of topoisomerase to cell replication (which requires DNA replication) has been exploited in anti-cancer drugs, which target the topoisomerases within the unwanted cells.