Questioning Our Over-Reliance on Science (video) 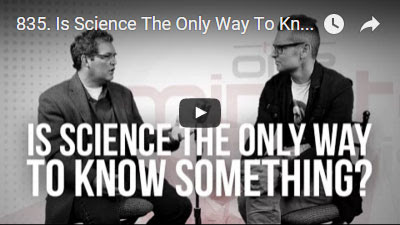 Recently, I got to sit down with the One Minute Apologist, Bobby Conway, and discussed several topics. One item that came up was our culture's over-emphasis of science as the last word in knowledge. The role of science does seem to be misunderstood these days, with people giving it more credence than it may deserve.

I would like 2016 to be the year when people remembered that science is a method of investigation,and NOT a belief system
— John Cleese (@JohnCleese) January 3, 2016

Cleese went on to offer a couple other tweets, which could be viewed in different ways, although folks like John Prager at AddictingInfo felt Cleese was slamming "anti-science conservatives." I don't know of that was Cleese's intention. However I do know that in his podcast, he seemed to make fun of those who would place an over-emphasis on science and scientists in this humorous video.

Of course, taking that tweet as it stands, Cleese is right. Science is only one method we use to know about the world and it is a fairly limited one at that. That's what I was able to explain in this short clip with Bobby Conway. You can watch it here: