Abortion and the S.L.E.D. Argument 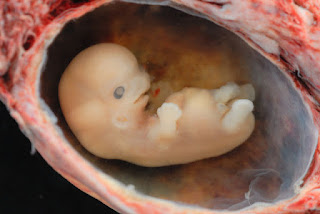 Tomorrow is Sanctity of Life Sunday and I can think of no better post for today than to quote Scott Klusendorf's S.L.E.D. argument answering those who would promote abortion. Abortion is one of the greatest evils in our day and there is no justification for it. There is no greater definition of evil than when a human being is killed simply so other will not be inconvenienced. Here's how Klusendorf lays out his argument:


Philosophically, there is no morally significant difference between the embryo you once were and the adult you are today. Differences of size, level of development, environment, and degree of dependency are not relevant in the way that abortion advocates need them to be. The simple acronym SLED can be used to illustrate these non-essential differences:

Size: True, embryos are smaller than newborns and adults, but why is that relevant? Do we really want to say that large people are more valuable than small ones? Men are generally larger than women, but that doesn’t mean they deserve more rights. Size doesn’t equal value.

Level of development: True, embryos and fetuses are less developed than you and I. But again, why is this relevant? Four year-old girls are less developed than 14 year-old ones. Should older children have more rights than their younger siblings? Some people say that the immediate capacity for self-awareness and a desire to go on living makes one valuable. But if that is true, newborns do not qualify as valuable human beings. Infants do not acquire distinct self-awareness and memory until several months after birth. (Best case scenario, infants acquire limited self-awareness three months after birth, when the synapse connections increase from 56 trillion to 1,000 trillion.) As abortion advocate and philosopher Dean Stretton writes, “Any plausible pro-choice theory will have to deny newborns a full right to life. That’s counterintuitive.”

Environment: Where you are has no bearing on who you are. Does your value change when you cross the street or roll over in bed? If not, how can a journey of eight inches down the birth-canal suddenly change the essential nature of the unborn from non-human to human? If the unborn are not already valuable human beings, merely changing their location can’t make them so.

Degree of Dependency: If viability bestows human value, then all those who depend on insulin or kidney medication are not valuable and we may kill them. Conjoined twins who share blood type and bodily systems also have no right to life.

In short, although humans differ immensely with respect to talents, accomplishments, and degrees of development, they are nonetheless equal (and valuable) because they all have the same human nature.1