Those Guilty of Doing Nothing in the Face of Evil

On October 27, 2009, a 15 year old girl went to her homecoming dance being held at the gymnasium of Richmond High School in Richmond, California. She was attacked outside the building and for some 2-1/2 hours was gang raped while as many as 20 bystanders looked on and did nothing.1 In October of 2012, a man is savagely beaten, robbed, and stripped of his clothes while onlookers laughed and filmed the event on their phones (clips of which can be seen here.)2 Jose Robles, manager of a Manhattan deli, after being beaten and mugged, complained from his hospital bed that no one stepped in to answer his cried for help. Instead, "people were watching and they were having a good time filming" the crime he said.3

Many people wonder how or why otherwise upright individuals could so callously ignore someone in need. Why wouldn't anyone help? In some situations, actually having a lot of people know about a heinous situation diminishes the desire for people to step in. Because of perceived social cues and reluctance to stick out, people will shy away from helping until they see others do so. The phenomenon is known as "the bystander effect" in psychology circles.4 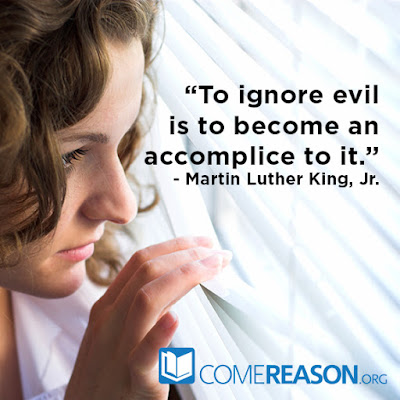 In her article on the bystander effect,5 Dr. Melissa Burkley references a landmark series of experiments conducted by John Darley and Bibb Latane. There they found two main components driving the lack of involvement by others. The first she dubs "pluralistic ignorance" and uses an example of a child who's splashing wildly in a pool. Upon seeing the child, you may survey the other adults in the pool area to see if anyone else is bothered by her actions. If they are concerned the child is drowning, you would dive in to rescue her. If they're indifferent, you may conclude nothing's wrong. But if no one knows and they all are looking at each other, then a false message is communicated.

The second factor of the bystander effect is what Burkley labels "diffusion of responsibility." She explains:

It shouldn't be a revelation that those who succumb to the bystander effect are wrong. Even Jesus taught against it in his parable of the Good Samaritan. As beings who are morally aware, every person has a duty to help those in need. To watch others and assume you carry only a fraction of the moral responsibility in a dire situation is to allow evil to persist. Even if one is unsure, as in the pool example, there is nothing improper for a person to walk toward the edge of the pool and ask the child if she is in distress. An inquiry is preferable to a child's death.

I bring this up because I'm seeing the bystander effect writ large in our society today. Millions of Christians as well as others are ignoring the evil of Planned Parenthood's extracting live babies from their mothers wombs in order to cut them apart and sell them off piece by piece. A few folks have written to me and asked "Why aren't people more upset about this?" As I've stated before, if public outcry can spur legislation within a month to ban confederate flags or one lion's death can ignite indignation across the country via social media, then certainly the lives of the most defenseless of human beings should be worth our time and effort. To ignore it or assume others will carry on with the fight is wrong.

There are many ways you can make a difference in the effort. First, if you haven't done so, make sure you watch the videos. I've linked to them all here. You don't have to watch the full footage, but the ten videos to date are damning evidence that this isn't manipulation or slick editing. Secondly, share them. Share them a lot. Voice your outrage at this barbarism. You can also follow some of the suggestions I've outlined here. And if you'd like to pass on some answers to the objections Planned Parenthood supporters are raising, check out the links to the articles below.

We must act in this crisis and not wait for others. As Carly Fiorina stated in the Republican Presidential debate on September 16, 2015:


I dare Hillary Clinton, Barack Obama to watch these tapes. Watch a fully-formed fetus on the table, its heart beating, its legs kicking, while someone says we have to keep it alive to harvest its brain. This is about the character of our nation.7

It's also about the character of each of us as individuals.