The Trinity, Firstborn, and the Dead 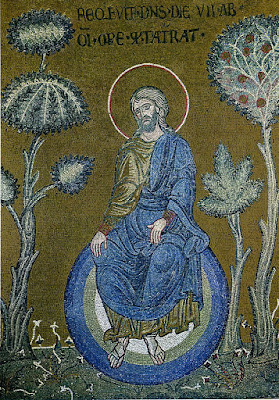 The Trinity is central to Christianity. If you deny the triune nature of God, then you've denied the historic Christian faith. Some like the Mormons deny there is only one God. Others like the Jehovah's Witnesses deny that Jesus was God at all. New Testament writers like Paul strove to describe the distinction between the Father and the Son while still honoring both as God, but those very passages can be taken out of context and twisted to carry a meaning the original author never intended.

One example of this is the phrase "firstborn" that Paul uses in Colossians 1:15-17. It reads:

In this passage, Paul is trying to stress how Jesus is creator, master, and lord over all of creation. This role has been traditionally understood as God's. The Bible even begins with the grand claim that "In the beginning, God created the heavens and the earth." Psalm 8 directly attributes the creation to Jehovah, stating "When I look at your heavens, the work of your fingers, the moon and the stars, which you have set in place, what is man that you are mindful of him and the son of man that you care for him?" Even we ourselves are the direct creation of God, as Psalm 100:3 admits, "Know that the Lord, he is God! It is he who made us, and we are his." As we see, over and over the Old Testament ties God to all of creation and uses it to show his rightful lordship over that creation.

Despite this, the Witnesses and others point to Colossians 1:15 to try and prove that Jesus was the first created being of God. To do this, they must redefine Paul's use of the word firstborn in that verse to mean first created. On its face, the mistake can be an easy one to make if you aren't paying attention. Western cultures no longer abide by traditional patriarchy and inheritance traditions where the first born son becomes the chief of the family.

So, when we hear the word firstborn, we simply think of "first-born," that is the order of coming into the world. But the Greek word it is ranslated from, prototokos, carries a much richer meaning than simply birth order. It more properly is understood in Colossians as "pre-eminent" or "primacy in rank."2Of course, many Witnesses have resisted this interpretation, claiming that we should take the word firstborn in its natural meaning. I can understand their desire; a more literal rendering of words is usually the first choice of translators unless the context shows otherwise.

Given that most people on both sides of this debate have not mastered Greek, how are we to show that the meaning of firstborn I've offered is to be preferred over the more literal rendering? In fact, it's very easy and context is the key. All we have to do is to keep reading Colossians 1, for in the next two verses we read "And he is the head of the body, the church. He is the beginning, the firstborn from the dead, that in everything he might be preeminent." Note verses 15-17 above and verses 18-19 here are both in the same paragraph. They are all one thought and the word firstborn appears not once, but twice! In the second instance, Paul claims that Jesus is "firstborn from the dead." If we are to use the natural rendering of this word, it would mean that dead people give birth! That doesn't make much sense at all. Jesus wasn't born from a dead person when he rose from the dead; that isn't a resurrection. In fact, Paul explicitly unpack the meaning of the word in verse 19, explaining that "in everything he might be preeminent." Paul is using prototokos to refer to Jesus's pre-eminence! He tells us that very plainly.

The big takeaway here is that it isn't necessary to have mastered a biblical language to answer folks like the JWs when they charge that the Bible makes Jesus out to be less than God. Many times, we just need to read the verses in context and carefully. The meaning can show itself in plain English.