The Consequences of Beliefs 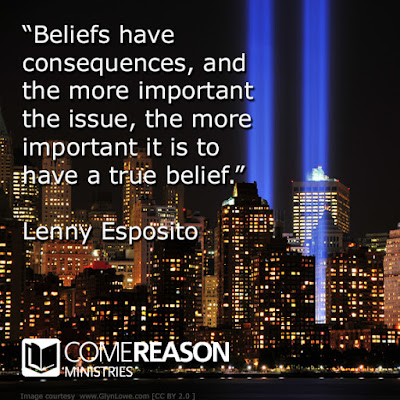 I've spent a lot of time on college campuses engaging with students and answering questions. Some are intrigued by a concept of Christianity they were unfamiliar with before our conversation. Most, though, don't see why I or Christians like me would seek to argue for our faith at all. They believe that people should be able to choose whatever faith they're comfortable with and everyone else should leave them alone. They think that beliefs are preferences akin to what flavor of ice cream they prefer.

But beliefs aren't preferences like ice cream. They deal with not simply what we like, but what's true. One may like cigarettes but still hold the belief that they will kill you and thus seek to quit smoking. Another may not believe this, and satisfy his or her liking for cigarettes. Beliefs are not simply preferences, they are what we think is true about something or not, and there are consequences for holding to one belief over another.

Because beliefs have consequences, it follows that the more important the issue, the more important the belief. If I hold a belief that shoe brand A is built better than that shoe brand B brand, I may purchase brand A only to find out my beliefs were wrong. The shoes wore out quickly and I've lost a few dollars in the process. But if I'm an oncologist and I believe in the medieval practice of bloodletting to cure cancer, that's a bigger issue and the consequences of my beliefs are going to have bigger effects on both myself and my patients.


Religious Beliefs Matter the Most

We've agreed that the importance of true beliefs rises along with the importance of the issue, but where do religious beliefs fit in? Are they, like those students on campus claim, just useful to give the believer a good feeling? The answer lies in the issues that are central to all religions and even to those who hold to no religion as well. The focus of one's religious belief or non-belief is basically the nature of reality itself. Why are we here? Is there some purpose to life? Should I live toward some end? How do I fit in a world of other people and what do I make of them? Where do moral laws come from? Is there a God or higher power to whom we are all ultimately accountable? These are serious questions on how we value ourselves, other people, and our world. They are the biggest questions humanity wrestles with.

Because the issues answered by religious belief are so important, it should be no surprise that the consequences of those beliefs will have a major impact upon the world as well. My wife and I had the opportunity to stay in Manhattan in June of 2001. We spent four days in the city, even walking around the World Trade Center. Of course we didn't realize then that within three months those buildings would fall along with the lives of nearly three thousand people simply because of the beliefs of a small group of men. If 9/11 has taught us anything, it should be that beliefs matter and the big beliefs matter quite a bit. Yet, I still hear students tell me that beliefs are akin to ice cream. How could they come to that conclusion?

As we reflect and mourn those lost on this day, we should also reflect on how important it is to examine our beliefs and see if we have good reasons to believe what we do. Everyone has beliefs; the real questions are why do you believe what you do and are you willing to inspect your own beliefs to see whether they are true? That's what a rational person would do.
Posted by Lenny Esposito at 12:43 PM
Labels: 9/11, beliefs, religion, worldview