"But what about all the hypocrites in the church? Look at those preachers who are only in it for the money! What about Josh Duggar? Did you know that Kentucky clerk who won't issue same-sex marriage licenses has been married four times herself!" 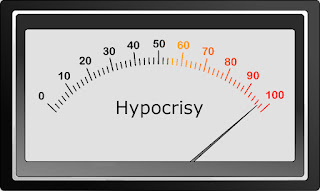 Anyone who has engaged in discussion over religious beliefs has likely heard comments such as these. I've spoken to many people myself who when they've run out of other objections retreat to the charge of hypocrisy. They seem to relish in finding any inconsistency between a Christian's public stance and his or her private failings. Is hypocrisy the trump card Christianity's critics and those on the left think it is?

First, one must be cautious about the charge of hypocrisy itself, as it is bandied about loosely but not well defined. For example, is a person a hypocrite because they previously behaved in a way that runs contrary to their current beliefs or is that growth? That's Kim Davis' story. Yes, she was married multiple times, but that was prior to her conversion. Should we call an ex-convict a hypocrite when he says he now respects the law? That isn't hypocrisy. That's growth and we should encourage it and celebrate it when it happens.


Failing to Uphold Your Own Standard

What about those who declare a moral standard, yet fail to uphold that standard themselves? Are they hypocrites? They may be, but they may also simply be, you know, human beings. Humans are flawed creatures who fail upholding their own standards all the time. If you doubt me, simply examine your morning commute. Have you ever criticized someone for driving too fast, cutting you off, or changing lanes too quickly only to find that you have done the same thing many times yourself?

To decry as a hypocrite anyone who ever fails at living against their ideal is wrong. It may even be wicked, demonstrating a callous disregard for those the charge seeks to condemn. CNN just reported that pastor and Seminary professor John Gibson took his own life six days after hackers exposes his name as one of those who had accessed the Ashley Madison website. His wife said his suicide note mentioned the site. "He talked about having his name on there, and he said he was just very, very sorry," she said.1

When examining Christians, it shouldn't be surprising that we fail to meet the standard we are called to live by. Christianity is a faith founded on grace and its central message is forgiveness. Christianity recognizes its adherents will fail; that's why Jesus taught we are to forgive seventy-times-seven. That doesn't mean we don't try, but it does mean that we will fail, sometimes in very big, very visible ways. Failure is not hypocrisy.


Hypocrisy is Leveraging a Lie

What is true hypocrisy, then? Hypocrisy is simply lying by leveraging a moral standard. Basically, it means you wish other to uphold when it suits you, but you won't necessarily uphold it yourself or uphold it in all situations. It's being morally dishonest, and that makes it repugnant.

Do real hypocrites exist? Absolutely. For example, if you cheered Eric Holder's advice to the states' Attorneys General to ignore their own laws banning same sex marriage last year but you decry Davis' ignoring her governor's directive (without any passage of law) this year, you might be a hypocrite. If you only charge those with positions you don't like as hypocrites while failing to examine anyone who aligns with your beliefs might be a sign of hypocrisy.

While we are all guilty of acting in ways that could warrant the charge of hypocrisy, there is one more thing that must be said. For you who hold up hypocrisy as the litmus test of a belief's merit, then I suggest you too become a Christian. In all of history, there has only been one individual who never failed to live up to his teachings and who offers forgiveness for those who do: Jesus Christ. He's the solution to hypocrisy, and he died on a cross to prove it.