God, Atheists, and the Problem of Suffering Children 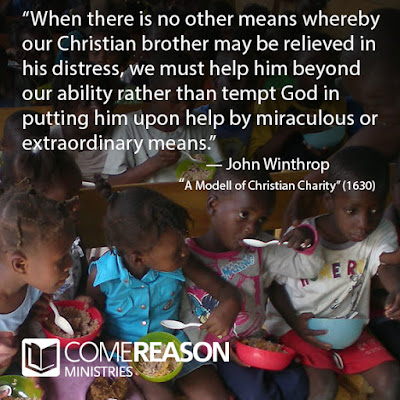 I've noticed that for some people commenting on social media is a lot like driving in a car alone. Certain drivers do things like pick their nose they would never do in polite company. It isn't that they don't know their vehicle's windows allow others to see inside as much as they can see outside. They simply feel protected and they haven't given their actions a second thought.

Similarly, people will say things online that are not thought out seeking to prove a point. One such statement was a conversation I witnessed on Twitter yesterday where a couple of atheists were making claims about how God couldn't exist. Their arguments were pretty pedestrian to begin with, but then they devolved to this:

So, let's take stock of what just happened here. All parties seem to know that children in areas across the globe are suffering. (The tweets seem to conflate children starving with suffering from certain medical maladies, two separate questions.) Given that they are accusing God of being silent, they seem to believe this situation is wrong and it needs to be rectified.

The question of why does God allow suffering is one with a long history. I've written about why God doesn't suppress all evil, Explained why evil must exist if we are to be loving creatures, and gone into longer answers on the problem of evil here and here. Of course when these atheists point out children suffering as wrong, they are themselves appealing to that which points to God's existence. But that isn't what bothered me.


Why Not Applaud the People Reducing Suffering?

What bothered me was the callous way these suffering people were being pointed to and how those pointing seemed to feel that it is God's fault and responsibility to do something about it. I don't think these commenters are really that concerned with the plight of those suffering. In the conversation they distance themselves from what's really going on, using and confusing the starvation of real human beings as a chip in their self-congratulatory position that God does not exist.

For example, when a Christian countered that Christians are actually on the ground feeding thousands starving in the poorest parts of the world, he received these responses:


Really? Instead of applauding that someone is trying to do the right thing, they turn and criticize God for not doing more? Of course wanting God to come in like some cosmic genie and clean up the mess that human beings have made in allowing their fellow man to suffer is a pretty easy out; it requires no work on the part of these Twitter commenters. Such a response is too slick.

What if the Lord is calling people to help but they're refusing to acknowledge him? He isn't going to force people to do what's right. Even much of the "natural" suffering we see isn't natural at all, but merely the ultimate outcome of immoral people doing immoral things, and it's the evil in men's hearts that allows such suffering to continue.

I really don't know if either Sandra or "ArtDeco" have contributed to alleviating the suffering of these children they so easily parade as proof of God's non-existence. But I do know that it's demonstrable that those who are religiously active don't just pray. They do more, give more, and work more at alleviating suffering than any other group. Arthur C. Brooks writes:


Religious people are 25 percentage points more likely than secularists to donate money (91 percent to 66 percent) and 23 points more likely to volunteer time (67 percent to 44 percent). And, consistent with the findings of other writers, these data show that practicing a religion is more important than the actual religion itself in predicting charitable behavior. For example, among those who attend worship services regularly, 92 percent of Protestants give charitably, compared with 91 percent of Catholics, 91 percent of Jews, and 89 percent from other religions.1

Brooks even sought to eliminate religious-compulsory motivations like giving due to social pressure or giving to the church in order to "have rewards in heaven." He looked at giving to nonreligious charities such as schools or civic groups and still found "religious people are 10 points more likely to give to these causes than secularists (71 percent to 61 percent) and 21 points more likely to volunteer (60 percent to 39 percent)."2

It isn't the theists that are the problem in the plight of suffering children; it's the secularists. Thus, an argument could be made that by trying to convince others there is no God, one is actually increasing the inaction of support for alleviating the suffering of children in the world. As to the charge that a God should do something about it, Brooks' article leads with an apropos quote by the American Puritan John Winthrop:


...When there is no other means whereby our Christian brother may be relieved in his distress, we must help him beyond our ability rather than tempt God in putting him upon help by miraculous or extraordinary meanes. (Emphasis added.)

That's the best response to the problem of suffering. Let's each one of us to roll up our sleeves and get to work reducing it rather than acknowledging it then chastising God for not doing his part.