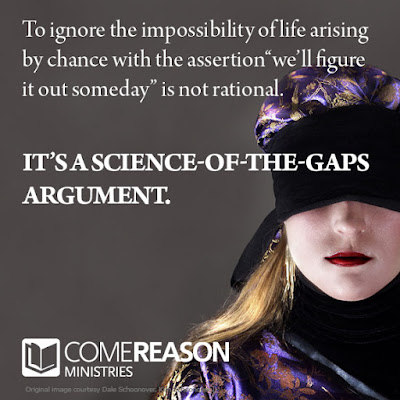 I had a commenter named Barry respond to my blog post "Why the Darwinist Version of Life's Origin is Anti-Science". First, he asked whether it is appropriate to couple the origin of life with neo-Darwinian evolution (it is), he then made the following statements:


You can't say "Well, we don't know how life emerged so God musta done it" simply because scientists don't know (yet). … That we don't know NOW how life began doesn't give anyone intellectual license to say that life has a supernatural cause due to a creative moment by a whimsical Omniscient Being. Relax. So we don't know right now what caused life to emerge. That's just the way it is. We'll understand some day. Maybe not in our lifetimes but it's likely to happen in the next fifty years or so.

You will notice that Barry admits a couple of things. First, he holds that arguments that are not from the point of evidence are not strong. He refers to these as "intellectually feeble." He also admits that scientists don’t know how life began. In fact, they have absolutely no idea, no working models, nor even any controlled lab experiments that shows how one can get even a self-replicating RNA molecule from ribozyme components. I also brought this up in my response, pointing him to the enormous odds Dr. David Berlinski offered.

Barry’s response was telling. He replied:


Odds, shmods. It happened. Life DID emerge when it did and that's that. The only thing we don't understand is HOW life emerged—and there is zip evidence that it was due to some supernatural intervention. Evidence is tying a palm print on the rifle to Oswald. Evidence is collecting DNA from a crime scene and connecting it to a suspect. You? You got nuthin' to link to.

Can you see how this paragraph directly contradicts his previously stated view that arguments without evidence are intellectually feeble? Odds schmods?? It’s clear that Barry doesn’t care what the evidence (e.g. the mathematics) shows on the possibility of life emerging by chance. He simply wants it to be true. But that’s what the decried in the previous exchange! He’s not relying on a God-of-the-gaps argument, but a science-of-the-gaps one. He rejects the actual scientific data that that natural laws and chemistry alone could never assemble the first living organism simply because he doesn’t want to believe it to be true!

You’ll also notice that Barry claimed I had "nuthin' to link to." I did link to a couple of articles in fact, one being the Berlinski quote above. One of the main tasks of the scientific method is to either validate or falsify a hypothesis. You see, scientists understand that a negative result is still a result. We have data on what is required for life to exist, and it is showing more and more that spontaneous self-assembly is not a logical option. Asserting "we'll understand some day" is a statement of faith that directly contradicts the increasingly mounting evidence against the hypothesis.

To trust in science alone is not following the evidence wherever it leads. It is seeking to validate a preconception at any cost, something rational individuals should shun.