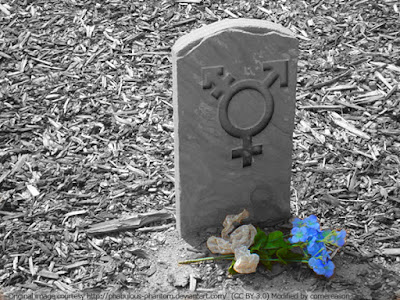 The Internet lit up yesterday when Vanity Fair unveiled photos of Bruce Jenner in his transitioned state as a woman. Immediately, cheers went up for Jenner, displayed as a 1940s Hollywood siren who now wishes to be called Caitlyn. An article on the American Civil Liberties Union site exhorted others to use Jenner's new name declaring:


It is important that people do actually call her Caitlyn.

Words matter and erasing the identity of trans people by calling them by their birth names and birth-assigned sex is an act of hatred — one that is inextricable from the brutal violence that so many trans people, particularly trans women of color, encounter just for existing in the world.

And because young trans people are dying by suicide and trans women of color are being murdered at alarming rates, those of us forming public narratives about trans celebrities have an obligation to tell those stories with care.1

I agree with the article that words matter and that lives matter. We should care about all people's lives and the difficult struggles they face. But it's because their lives are in danger that I will say the ACLU and the homosexual lobby are wrong to be pushing sexual reassignment surgery for people who feel uncomfortable with their body's sex. It's a dangerous falsehood that many times proves deadly to the patients that should have been helped.

The history of the modern transgender movement began about seventy years ago with three men: sex researcher Alfred Kinsey, endocrinologist Harry Benjamin, and psychologist John Money.2 Kinsey's sexual deviancies, who famously said "there are only three kinds of sexual abnormalities: abstinence, celibacy and delayed marriage" are well known. 3 Kinsey referred Barry, a 23 year old male with gender dysphoria to Benjamin in 1948, and though no U.S. hospitals would do the surgery, Benjamin encouraged Barry to have three operations performed in Germany.4 However, Benjamin never heard from his patient again, so we don't know how the surgery affected Barry long-term.5

Dr. John Money was a member of Benjamin's research team, and in 1967 he sought to change a two-year-old boy whose genitals had been damaged by a botched circumcision into a girl, reassuring the parents that the child would grow up never knowing the difference. But as the Los Angeles Times reported, "the gender conversion was far from successful. Money's experiment was a disaster for Reimer that created psychological scars he ultimately could not overcome." David Reimer committed suicide at the age of 38.6 Yet that gap proved to be enough time for Money to advance his agenda that sex is fluid and changeable, and to legitimize transsexual surgery in the minds of many around the country.

Responding to these initial success reports, the prestigious Johns Hopkins University formed a clinic to facilitate transitioning patients to their desired sex with John Money as a co-founder. Dr. Paul McHugh, the director of psychiatry and behavioral science at Johns Hopkins University Medical Center sought to find evidential support for this treatment and began studying patients both in pre and post-operative stages of treatment. His study revealed two things: First, 70% - 80% of children who report transgender feelings spontaneously lost those feelings when they were left alone. That means the vast majority of patients left to themselves would identify as their biological sex. It's the counseling and initial treatments that make these patients continue to believe they're the wrong sex.

Secondly, McHugh found that post-surgery, the patients' mental health issues did not go away. He said, "Most of the surgically treated patients described themselves as 'satisfied' by the results, but their subsequent psycho-social adjustments were no better than those who didn't have the surgery. And so at Hopkins we stopped doing sex-reassignment surgery, since producing a 'satisfied' but still troubled patient seemed an inadequate reason for surgically amputating normal organs."7

McHugh notes that a very recent (2011) study pout of Sweden followed 324 patients for a period of up to thirty years after they underwent sex-reassignment surgery. Unlike Benjamin and Money's reports, this study has strong evidence for the efficacy of SRS. McHugh Reports:


The study revealed that beginning about 10 years after having the surgery, the transgendered began to experience increasing mental difficulties. Most shockingly, their suicide mortality rose almost 20-fold above the comparable nontransgender population. This disturbing result has as yet no explanation but probably reflects the growing sense of isolation reported by the aging transgendered after surgery. The high suicide rate certainly challenges the surgery prescription.8

In 2010, National Center for Transgender Equality produced a survey reporting that a staggering 41% of those who identify as transgendered have attempted to commit suicide. 9 A study of 425 patients who were currently in treatment receiving hormone therapies found "the number of deaths in male-to-female transsexuals was five times the number expected, due to increased numbers of suicide and death of unknown cause."10

Dr. Charles Ihlenfeld was a partner to Harry Benjamin and worked with him for six years. But when Ihlenfeld discovered the findings of McHugh, he too announced that most patients suffering from Gender dysphoria shouldn't begin transitioning. "There is too much unhappiness among people who have had the surgery…Too many end in suicide" he said.11


Why is Culture Buying the Snake Oil?

Today, there is really no excuse to continue the charade that SMS is a proper treatment for gender dysphoria. We know the story of Mike Penner, the LA Times sports reporter who became Christine Daniels only to switch back and ultimately take his own life. It was a very visible public display of what the transgender lobby doesn't want to admit: your body's sex is not the source of the patient's problems.

There are people who feel that some part of their body is foreign to them. They are officially diagnosed as having Body Integration Identity Disorder. Those people seek to amputate the limb or whatever part they feel alien to. However, I know of no doctor or mental health professional who would amputate a healthy limb simply because of the belief of the patient that it doesn't belong there. Yet, that is exactly what our media and the transgender lobby is pushing for with Jenner and others. Chase Strangio and the ACLU don't care about saving lives, they care about advancing their agenda! Transsexualism is snake oil with a fifty year track record of failure that ends with many patients committing suicide. We need to focus on that cause, not on surgeries that amputate healthy organs.

In the words of Dr. McHugh:


At the heart of the problem is confusion over the nature of the transgendered. "Sex change" is biologically impossible. People who undergo sex-reassignment surgery do not change from men to women or vice versa. Rather, they become feminized men or masculinized women. Claiming that this is civil-rights matter and encouraging surgical intervention is in reality to collaborate with and promote a mental disorder.12

Let's not let the media circus over Jenner distort the fact that this is a dangerous road and we shouldn't be enabling him and others by cheering him on.