WALL-E, Morality, and Men Without Chests 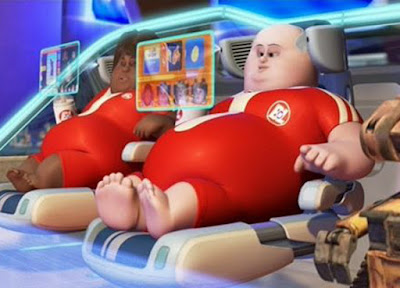 In the 2008 Pixar film WALL-E, humans are not the hero. The movie portrays people as very advanced technologically: they can create space ships that house the population of the planet. They can build robots that will function autonomously for hundreds of years. They have floating chairs and auto-changing clothes. Work seems to be passé.

Even with accomplishing the things that we toady dream about, the film doesn't want you to think humans are in a better position. It wants you to realize that they've traded an important part of their humanity for their comfort and convenience. They've lost the idea that work, exercise, struggle, and the natural order are part of the human condition. In the consumerist culture of WALL-E, humans' drive to satisfy every desire has made their bellies so fat they can no longer stand on their feet.


Our Growing Bellies and Shrinking Chests

It should be no surprise that the comment on humanity in WALL-E wasn't about the distant future, but about our culture today. We're the ones who are driven so much by our desires that we've grown fat and forsaken the richness that denial of pleasure offers human beings, and that fatness is not only physical. We've let out appetites overwhelm us on questions of morality, too.

The fatness of our bellies was famously noted by C.S. Lewis in his short book The Abolition of Man. Lewis, drawing from Plato, extends the idea. Human beings have two centers of motivation: his reasoning and his appetites. We can come to a decision that X is the right thing to do by weighing the pros and cons, and looking at the consequences of the outcome, not only for ourselves but for others and for society in general. This is reasoning, or being ruled by the head.

The other source of motivation is our appetites. Appetites and desires are universal, but they really don't require much thought. You feel them and seek to satisfy them. Appetites are pictured to be ruled by the belly, that is the stomach and genitals. They are not constrained to only sexual or gastronomic satisfaction, though. Desire to get the "next new thing" or the desire to avoid work, like in WALL-E would qualify.

If we were to be ruled by only our appetites, we are no better off than animals. It is our head, our ability to reason and curb appetites that make us civilized. But how do we do this, when our appetites are so powerful within us? Lewis says we have traditionally allowed the head to rule over the belly through the chest. He explains the chest is the center of magnanimity. It is:


emotions organized by trained habit into stable sentiments. The Chest-Magnanimity-Sentiment — these are the indispensable liaison officers between cerebral man and visceral man. It may even be said that it is by this middle element that man is man: for by his intellect he is mere spirit and by his appetite mere animal.1

We are in the World of WALL-E Right Now

Our culture has given itself over completely to its appetites. Individuality has trumped reason. We are told that sex doesn't matter in marriage, the only institution recognized as the appropriate to rear children. We're told that biology has nothing to do with gender although it has everything to do with sexual orientation. We care more about finding self-fulfillment in whatever our desires may be than we do to upholding the time-tested pillars that uphold society for all. Owen Strachan believes the Obergefell ruling demonstrates this: "Our self-obsessed society has made good on its orientation. We now care more about personal feelings and rights we deemed are owed to us than we do about duties to God, family, country, and community."2

Because we no longer value magnanimity (does anyone even know what the word means today?), the belly has his way and becomes more and more engorged. We are, as Lewis claimed, Men without Chests. But it also makes us men without feet and men without a natural home. We are adrift on a craft built entirely of comfort and we've forgotten how to walk. The problem is, sooner or later we are going to fall out of our lounge chairs and we won't be able to get up again.