Liberal Philosophy is Backfiring on Its Champions

There aren't many people championing Marx and Lenin anymore. The New York Times reported that the Socialist party has only about 1,000 registered members, the Communist Party U.S.A. has about 2,000 members, and the Democratic Socialists, 6,000. Compare that to their heyday; in the 1932 presidential election, their combined votes numbered nearly one million. 1 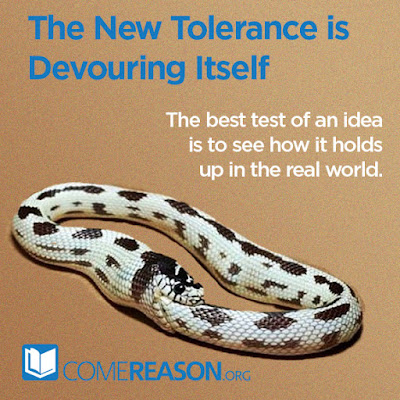 Why are these parties so unsuccessful today? One reason is Communism as an idea has proven to simply not work in the real world. It was tried across many countries of Eastern Europe, most notably within the Soviet Union. The Communist experiment ran some 70 years, but it didn't improve the lives of the citizens, it worsened them. In fact, in every country where communism was attempted, it became an utter failure. Even today, citizens of Communist countries like Cuba are still suffering in third-world conditions. Once Communist China adopted Western/capitalist economic models (while using communism to hold onto political control) it began to thrive.

I use this example to highlight a fairly simple point: there are a lot of theories that sound good on paper, but when applied in the real world, they simply don't work. In fact, that's one way to identify if your worldview makes sense—see how it matches up with reality.


Political Correctness Eating Its Own

I've been watching with interest how liberal advocates are now suffering the consequences of their own dictums. Universities have been beating the drum on non-offensive speech, relative morality, and political correctness for decades, but now those who have promoted such views have been finding themselves subject to condemnation by the very students they instructed.

One example is Laura Kipnis, a professor at Northwestern University and a self-described feminist and cultural critic recently wrote an article decrying the "sexual paranoia" happening at college campuses. She didn't name any names nor did she point to a specific example, yet according to the Fiscal Times, two students filed harassment charges against her claiming that her essay had "'a chilling effect' on students' ability to report sexual misconduct ."2 Since in Title IX cases, the university basically treats the accused as guilty until proven innocent, Kipnis had to undergo an arduous ordeal trying to show how the feelings of the students who felt victimized didn't count.

Edward Schlosser, a professor at "a midsize state school" admits in an article on Vox that "my students sometimes scare me — particularly the liberal ones."3 He recounts how a class discussion on the housing crash where a student challenged a film presentation on the underlying cause of the crash because the video did not talk about race as a factor. The student filed a complaint with his director.

Schlosser said the new feelings-based standard has him modifying his teaching style. He reports:


I have intentionally adjusted my teaching materials as the political winds have shifted. (I also make sure all my remotely offensive or challenging opinions, such as this article, are expressed either anonymously or pseudonymously). Most of my colleagues who still have jobs have done the same. We've seen bad things happen to too many good teachers — adjuncts getting axed because their evaluations dipped below a 3.0, grad students being removed from classes after a single student complaint, and so on.4

I believe Schlosser is scared. In fact, he was so scared he chose a pseudonym to write the article.

There seems to be no one who is safe from the rebid demand to not hurt feelings by students today. Even Dan Savage, the sex columnist and homosexual advocate was caught the double-edged sword of hurt feelings. You may remember Savage from his castigation of Christian students at a student journalism conference last year. He was hoisted on his own petard when speaking at the University of Chicago. Savage was explaining that he used to use the word "tranny" to talk of transgenders, but even using the word in his explanation caused students to accuse him of committing a hate crime and set up a petition on change.org providing guidelines for future speakers so they will not offend anyone. 5


Tolerance Crumbling Under Its Own Weight

There are many more stories such as these coming out of universities. Christina Hoff Sommers experienced this many times when she speaks, eliciting charges of triggering students and faculty alike. Sommers is also a self-identified feminist, although she likes to present the facts as they pertain to things like wage differences or biases against women in vocations. Those facts are enough to make her an enemy of those who simply want to believe the narrative rather than the truth.

I've written before about living in the age of feeling. I've recognized that by abandoning the traditional moral understanding of sex, colleges have opened themselves up to more sexual miscreancy.. Now, we can see the fruition of the "tolerance" and "do not offend" ideology. Liberal professors, who have taught such poorly defined  concepts are now beginning to reap the consequences of that position. All I can hope is that like communism, the culture abandons those failed ideas and returns to search for the truth, for that's the only thing that will withstand the test of time.