The Muslim Root of the Armenian Genocide

When we hear the accounts of oppression and slaughter coming out of the Middle East we're horrified. I recently read of one such story where a wedding party had just returned to the family's house from the church ceremony. A band of armed terrorists awaited them there, attacking the guests and the wedding party itself, robbing them of their belongings. When they reached the bride, they stole all she had, raped her, and left. Weddings then began to be held secretly in homes for fear of becoming targets or because the Muslims would kidnap the bride prior to the wedding, asking for ransom for her return.1 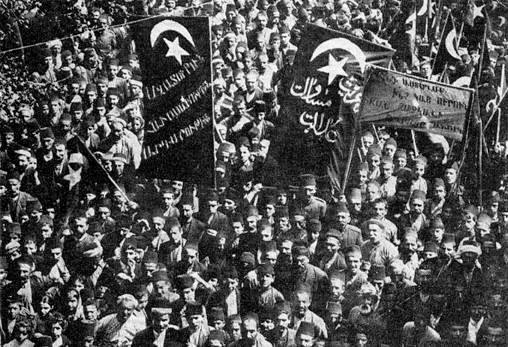 You may think that stories like this come from recent news reports. But, this story isn't about a group like ISIS seeking to exterminate Christians in Iraq. This was a common occurrence for Middle Eastern Christians throughout the Ottoman Empire from the 1500s until its collapse in the twentieth century.  Today, Armenians the world over are remembering the one hundredth anniversary of the Armenian Genocide's beginning, with ceremonies, gatherings and stories. One hundred years ago today, the Young Turks, while looking to establish a  more modern, more European-like society also began a mass extermination that took approximately 1.5 million lives.

How could such a thing happen? How could a government seek to destroy an indigenous portion of its population? As Dr. Gregory H. Stanton has taught, there are eight stages people groups are subjected to that point to genocide.2 While the Armenian Genocide cannot be classified as exclusively religiously-motivated, it is the teaching of Islam that clearly set the stage.

The Ottomans, following Muslim Sharia law, had a policy of dhimmi, which meant that non-Muslims would have to pay a tribute tax (jizya) and hold second-class status in their own lands. Through Islamic law, the Armenians were classified, symbolized, dehumanized, and polarized, four key stages that Stanton identifies. Ramsay's report, written nearly two decades before the beginning of the exterminations, reports Christians were viewed as unworthy of even being converted to Islam for centuries:


They were dogs and pigs; and their nature was to be Christians, to be spat upon, if their shadow darkened a Turk, to be outraged, to be the mats on which he wiped the mud from his feet. Conceive the inevitable result of centuries of slavery, of subjection to insult and scorn, centuries in which nothing that belonged to the Armenian, neither his property, his house, his life, his person, nor his family, was sacred or safe from violence – capricious, unprovoked violence – to resist which by violence meant death! 3

The New York Times agrees that there was already "a policy of extermination directed against the Christians of Asia Minor" in place well before the Young Turks began their purging of Armenians.4 The Armenians had subsisted in this manner for so long because of their acquiescence to their Muslim conquerors. Ramsay continues:


Every one knew that any sign of sprit or courage would be almost certain to draw down immediate punishment… [The Armenians] are charged, by the voice of almost every traveler, with timidity and even cowardice; but the for centuries they had the choice offered them between submission and death. So long as they were perfectly submissive, they were allowed to live in comparative quiet; so long as they had money, they could purchase immunity from or redress for, insult. Naturally and necessarily the bravest were killed off, they that could most readily cringe and submit survived, and all efforts were directed at acquiring money, as the only way of providing safety for family and self."5

However, as Taner Akcam writes, in the nineteenth century things began to change. "The Christian minorities, infected with the spirit of progress and freedom blowing in from Europe, began to revolt against political and economic oppression and demand equality, followed by autonomy, and eventually territory. The Ottomans generally met these demands with violent suppression and terror."6

When The Young Turks, a group that sought to create a constitutional government in Turkey instead of a monarchy grabbed power, they provided the other four steps necessary for the genocide: an organized state, preparation, extermination, and denial.7 To this day, the Turkish government denies that any type of genocide has occurred, even though it was recognized by the United Nations thirty years ago.

Christianity upholds the equality of all people. We are all made in the image of God and all worthy of respect. Christianity teaches that we are to pray for our enemies, that we are not to take vengeance but it is up to God to repay. Islam teaches the subjugation and separation of non-Muslims.  It shouldn't be a surprise that horrendous atrocities can be cultivated in a culture where Sharia principles have been lived out for centuries.