Technology can be a great tool and certain technological achievements have made huge impacts on humanity. The printing press helped usher in the Renaissance and the steam engine fueled the Industrial Revolution. With the advent of the Internet, humanity has entered into the Information Age1, one which pundits lauded as a golden time where an explosion in knowledge would help more people to become more intelligent. However, as anyone who has engaged in an online debate will tell you, that isn't necessarily the case. There's a whole lot of junk out there as well, and it takes a thoughtful person to sift through the arguments. 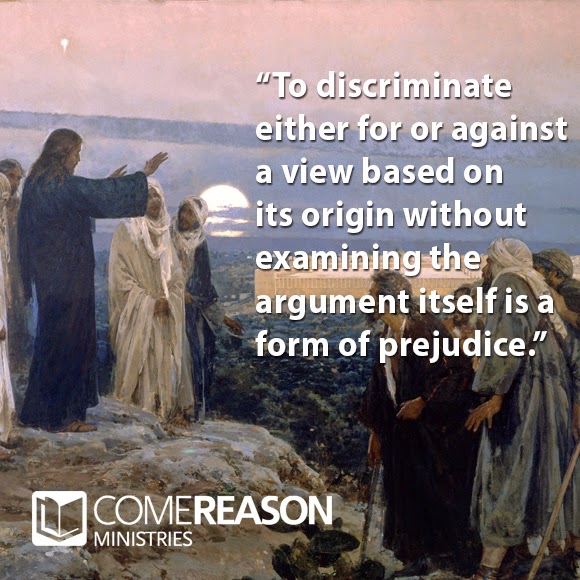 One mistake I see constantly is a person who rejects any religious claim and asserts that a certain proposition must be right because it is scientific. Such people ridicule religious thought as "ancient" or "superstitious" because it is old or simply part of a traditional faith culture.  Scientists are the ones who really know; and we need to trust them because they are the unbiased discoverers of truth.

Such charges are nonsense. Assuming science can be the ultimate arbitrar for truth is a form of scientism that ignores the fact that scientists are just as biased as anyone else. Those that assume such are making a mistake in thinking, one that even Jesus faced in his day.


Assuming Error Because of the Source

In John chapter 7, during the Feast of Booths, the Chief Priests and the Pharisees had sent its officers out to arrest Jesus, but the officers came back without him. John records the scene:


The officers then came to the chief priests and Pharisees, who said to them, "Why did you not bring him?" The officers answered, "No one ever spoke like this man!" The Pharisees answered them, "Have you also been deceived? Have any of the authorities or the Pharisees believed in him? But this crowd that does not know the law is accursed." Nicodemus, who had gone to him before, and who was one of them, said to them, "Does our law judge a man without first giving him a hearing and learning what he does?" They replied, "Are you from Galilee too? Search and see that no prophet arises from Galilee."2

The Jewish Leadership is arguing that Jesus must be lying about his speaking on God's behalf because he comes out of Galilee, and they tell Nicodemus, that "no prophet arises from Galilee." This is a logical mistake known as the genetic fallacy, which is when you don't look at the merits of the argument, but you simply dismiss it because if its source. It's like arguing that because my 2nd grade math teacher was placed in jail for perjury, I shouldn't believe his claim that 2+2=4.

Here, the officers are reporting that Jesus's teaching is remarkable, something that needs to be considered. However, the Priests and Pharisees dismiss their claim, stating it cannot be true because Jesus comes from the wrong area of Israel. They challenge Nicodemus to "Search and see that no prophet arises from Galilee." Here, the leaders were actually wrong even in their challenge. There were at least two prophets of the Old Testament that came from the Galilean region, Jonah, who came from Gath-hepher (2 Kings 14:25), which is just north of Nazareth, and Nahum.3 In Jesus's day, the people of Galilee were composed of many different races, and as the International Standard Bible Encyclopedia says, "Their mixed origin explains the differences in speech which distinguished them from their brethren in the South, who regarded Galilee and the Galileans with a certain proud contempt (Joh 1:46; 7:52)."4 So it may very well be their bias against people from Galilee that the leaders were trying to exploit against Jesus.


Assuming Truth Because of the Source

The Jewish leadership offered another form of the genetic fallacy when they faced off against Jesus in John 8. In an exchange that became a bit tense, Jesus challenged them by saying, "I know that you are offspring of Abraham; yet you seek to kill me because my word finds no place in you. I speak of what I have seen with my Father, and you do what you have heard from your father."5  The Pharisees responded by claiming they were true Jews: "Abraham is our father," they exclaimed. But just being the biological offspring of Abraham doesn't make one righteous or right. This is a literal version of the genetic fallacy! Jesus corrected them and states that they don't follow the faith of Abraham, they follow their spiritual father, the Devil.

In the first instance we see the Pharisees dismissing Jesus's claims because he isn't from Galilee.  The Jewish leadership does not recognize anyone from Galilee as authoritative. This is very much like those who would dismiss any biblical teaching because they say the source, which is the Bible, is invalid. In the second instance, the leadership held that they couldn't be wrong because they came from the right source; they were the descendants of Abraham. This is very much like the claim that science and scientists hold the authority over any other claims because they come from a scientific origin.

Neither of these arguments are logically valid. One must look at the actual argument and the reasons supporting it to judge its worth. To discriminate either for or against a view based on its origin—whether it is new or old, faith-based of scientific, comes from an expert or a novice—without examining the argument itself is a form of prejudice. It's the genetic fallacy, and something we should all avoid.