Why a Good Bible Translation is Not Enough

A friend of mine from Holland recently asked if there was an English equivalent to the Dutch phrase "'s Avonds een vent, 's ochtends een vent." The phrase translates to the English "At night a man, in the morning a man" and it's a very popular idiom there, or so I'm told. The Dutch will recognize its meaning immediately, but as an English speaker, I'm going to be hopelessly lost unless my friend unpacks the phrase a bit more. As it turns out, it implied that if one wishes to act like an adult and stay out late (perhaps drinking or partying), then one must also act like an adult in the morning by getting up on time and putting forth a full effort at his or her responsibilities of work or school.

How Culture Affects the Use of Language

Reading the translation of the idiom by itself, I don't think anyone unacquainted with Dutch culture would ever understand its meaning. The United States was heavily influenced by the Puritans, so we don't have any figure of speech that equates drinking with being a grown up. Instead, we have Benjamin Franklin's "Early to bed, early to rise makes a man healthy, wealthy, and wise," which is much more in line with our work ethic.

I offer this example because idioms and figures of speech are used throughout the Bible and simply reading a Bible translation without understanding how the language is being used can lead the student to as much confusion as only translating the Dutch idiom above. Let me give you one example: In Amos 4:6 God tells the Israelites, "I gave you cleanness of teeth in all your cities." To a 21st century culture, one may rejoice. But the phrase is a curse as it is followed by "and lack of bread in all your places, yet you did not return to me." God is telling the Israelites that he caused a famine; their teeth were clean because there was no food left to get stuck in them!

Because modern society places an emphasis on white teeth and good oral hygiene, we bring certain presuppositions to the text without even realizing it and one can often miss the point. Another example is Proverbs 22:13 which reads, "The sluggard says, ‘There is a lion outside! I shall be killed in the streets!'" While such an alarm sounds important and anything other than sluggardly, if you know that lions were native to Israel but not dominant there1 you can perhaps make out the meaning of the proverb. The sluggard says he cannot go outside to work because he may be attacked by a lion (a very unlikely scenario). It's akin to me saying I cannot drive to work because I may be killed in a car accident.

The emphasis of a culture also colors words. In talking about the Franklin quote above, another friend  responded with a favorite from her father: "Early to rise, early to bed makes a man socially dead!" Different times can emphasize different values and can make the same idiom appear differently to the reader. The influence of the Puritans are fading from American culture!

There are of course many more illustrations I could offer, but I think the point is clear. One must do more than simply read the Bible in a wooden, literal way to understand what the author is trying to convey to his readers. This especially is true when a skeptic or atheist tries to assert that one certain passage offers a contradiction to another. As I've previously written, claiming a contradiction for Jesus' claim that he'd be in the tomb three days and three nights is simply an abuse of an idiom. We know that the phrase is an idiom because David used it well before Jesus in 1 Samuel 30 and it didn't mean 72 hours in his usage either.

Therefore, before you read a book of the Bible, make sure you keep in mind a few key questions. Ask about the audience to whom the book was being written. Was it for believers in the church, Israel citizens, or a general retelling of events? What issue, problem, or point prompted the author to write to them? Is the author trying to write history, poetry, establish civil laws that would apply only to the nation of Israel, or do something else in the text? All these pieces help the student better understand the words on the page. Most good study bibles will have an introductory section that answers these questions for you as well as footnotes that can explain some of the more confusing idioms. Good commentaries can also be of immense value in better grasping the historical aspects of the passage. It's like the old proverb says, "Any text taken out of context is a pretext." Be a man and divide the word rightly! 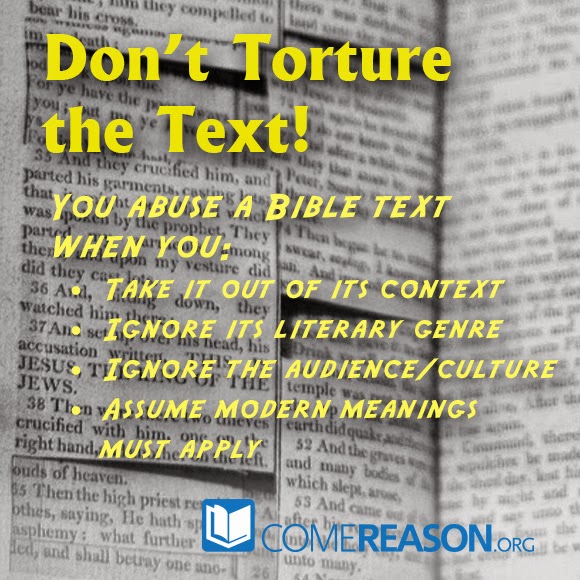