Three Ways Our Universe is Designed for Life 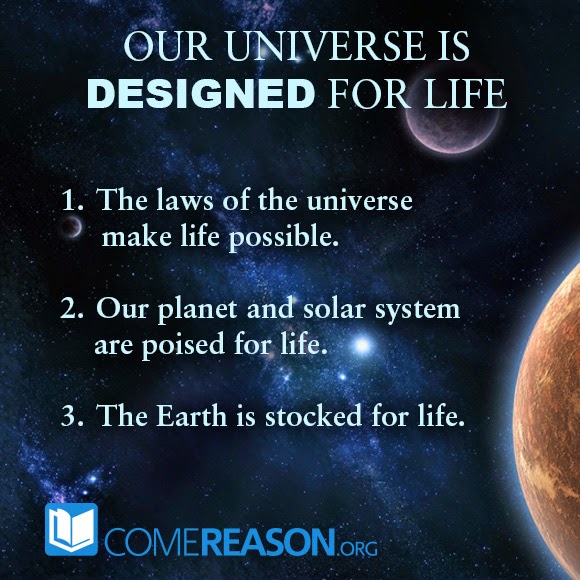 Finding the perfect cabin in a dangerous wood

In order to understand how this works, I would like to offer an analogy. Imagine that you're lost in a dark, dangerous wood. The temperature fluctuates from extreme heat in the day to frigid cold at night. You have no food and no water. Aside from the other life-threatening conditions, there are dangerous animals that may attack you if you stay out in the open. You need to find shelter if you are ever going to survive. By chance, you stumble upon a cabin in a clearing of the forest. Crawling through an open window, you quickly hurry inside, thankful for your good luck. Luck is all you currently perceive finding the cabin to be. I mean it's quite possible that you could have taken any number of routes through the wood and ended up someplace else, but you just happened to end up here. However, as you start to explore the cabin, you attitude begins to change.

First, you notice that there's fresh food in the kitchen, and that the food just happens to be all your favorite kinds. Then, you see that there are some medical supplies in the bathroom that are exactly what you need: bandages for your cuts and scrapes, but also insulin for treating your diabetes. In the bedroom, there's a collection of CDs from all your favorite bands, three books are on the table that are your favorite books, and the reading glasses are your exact prescription! The mattress is the exact firmness you like and all the clothes in the closet fit you perfectly. Finally, you go to the front door, but it is locked. On a hunch, you pull out your house key from your pocket and try it in the door. The key unlocks the front door and you are able to enter and exit effortlessly. After these and many, many more discoveries, you finally come to the conclusion that this is not a random cabin at all, but one designed especially for you to help you survive within this dangerous forest.


Before you can create tuna, you must first tune the universe!

Now, you may be thinking that I'm stretching the facts a bit when I give the examples in my cabin analogy above. In fact, I'm actually downplaying the amazing precision of what science is finding out about the very delicate balance of features the universe must have in order to allow life to exist as it does on this planet. As we continue to learn more about how our universe works, we are finding two very interesting things:
Sometimes because of our familiarity with a situation, we neglect to think about how many elements must be just right for the desired goal to happen. Returning to our cabin illustration, we see a cabin in a clearing and run to it, perhaps wondering why it's there, but not really thinking about all the conditions it would take to make the cabin.

Really, for a shelter to be of any use in saving someone from dying in the woods, it is important that the area where that shelter sits be just right for the type of shelter it is and the materials used to construct the shelter be made out of the right stuff. The shelter also needs to have life-supporting elements inside. Otherwise you will simply be forced to abandon it or die. Let's take these one at a time and look at them more closely. We will examine the first one today and look at the other two in tomorrow's post.


1.  Laws of the universe make life possible (the area is right)

In order for a cabin to be built and help a desperate soul lost in the woods, it must be built in a location that has specific properties. For example, no one would want to climb into a cabin and find out it was built on quicksand. The ground must be firm and able to hold a strong foundation. The trees must be cleared away so that there is adequate room for the structure. A cabin built on a severe slope or on the other side of an impassible ravine would make it impossible to get to. Swampy areas would cause the wood that the cabin is built out of to rot.

Our universe has laws that govern how its build materials fit together and react to one another. Things like the strength of gravity or the force that allows protons and neutrons within an atom to stick together are delicately balanced. For example, gravity make a huge difference in whether we would have any stars that could support life like our sun does. According to scientists John Barrow and Frank Tipler, if the force of gravity had been slightly weaker, all stars would have formed into red dwarfs, not producing enough heat to sustain life on any planet. But if it had been slightly stronger, stars would all form to be blue giants, which burn too briefly for life to develop.1 The fine-tuning of this force must be set to a value so fine that a change of less than a trillionth of a trillionth of a trillionth would be catastrophic for stars like our sun. 2

There are many other laws that have a similar crucial impact on whether our universe is just right to even allow life to exist, such as the size of an electron relative to a proton, how fast the universe expands, the age of the universe, the speed of light, the amount and uniform level of radiation in the universe, and many, many more. See table 1 for just some of these balances.

Paul Davies, a widely respected physicist and cosmologist, noted that many of the laws of the universe we take for granted are not necessary at all, but function just like that clear, level area that allows us to construct the cabin. In fact, that the universe could have turned out much differently than it did. Davies said "You might be tempted to suppose that any old rag-bag of laws would produce a complex universe of some sort, with attendant inhabitants convinced of their own specialness. Not so. It turns out that randomly-selected laws lead almost inevitably either to unrelieved chaos or boring and uneventful simplicity. Our own universe is poised exquisitely between these unpalatable alternatives."3