I recently wrote a post on how the origin of life argues for God's existence. In the comments section, one person replied, "I wouldn't say intelligent design is 'a priori' forbidden, but I would look for the design. Is there a map, or some kind of blueprint? Is there some kind of scaffolding left over from the construction phase? These are things we're actually looking for." Well, scaffolding doesn't continue to exist even on buildings we construct today, so that may not be the best indicator. However, other indicators of design do exist, and one points clearly to the need for a designer. 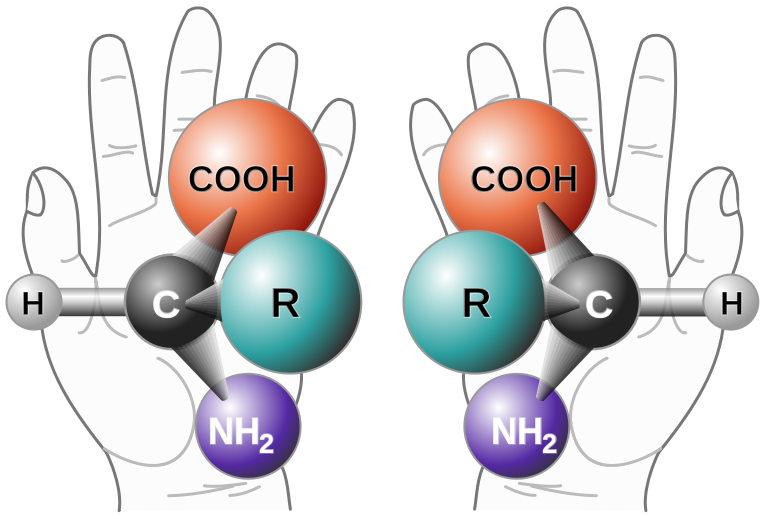 Most people realize the importance of proteins to life. Proteins make up muscle and tissue of organisms. They even form even the walls of cells, including single-celled organisms. Without proteins, life simply cannot exist. There are many different proteins, however all proteins are built with the use of only about twenty smaller units, known as amino acids.

Amino acids are interesting molecules, in that they are not all shaped the same way, even when they have all the same chemicals. They are known as chiral molecules, which means their structures have direction. One illustration that is often used is to look at your left and right hands. Even though each of your hands has four fingers and a thumb, they aren't the same. A left hand won't fit into a right-hand glove. Amino acids are like your hands; they have a "handedness" to their shape.


The Origin of Life Flips Heads Thousands of Times

Chiral amino acids tend to occur naturally in equal numbers. Just as one would expect to find about as many left hands as right hands in any random sample, nature produces an equal number of "left-handed" and "right handed" amino acid types. The left-handed and right handed versions of these amino acids have the same chemical properties, but here's the interesting thing; only left-handed (levorotatory) amino acids are the ones used to build the proteins needed for life. This means that under random conditions, you have about a 50% chance of a left-handed acid being used in the construction of a protein as well as about a 50% chance of a right-handed acid being used. Each will bond equally well to the backbone. Yet, if you were to mix these acids, you're going to do grave damage to the protein.

Life requires all the same-handed amino acids to be chosen, but to assume that such a feat was accomplished thousands of times without someone screening out the right-handed acids stretches credulity to its limit. According to this podcast with bio-chemist Dr. Charles Garner, scientist working in laboratory conditions haven't even been able to come close to any model where such an event would happen. Just as any coin that consistently turns up heads would be evidence of tampering, so too does the same-handedness of amino acids.


DNA and RNA - The Other Glove Drops

Some may at this point argue that it is because of DNA or RNA that the left-handed acids are chosen for building proteins. But DNA and RNA have the same issues themselves. The nucleotide chains that make up these molecules are all right-handed! So if one were to start with a nucleic acid to build proteins, it still requires a model of selecting only right handed acids, even though there's a 50/50 chance of getting a left-handed one there. The problem still exists, and it is possibly made worse given the simplest life forms require some hundreds of thousands of base-pairs within the genome.

In all, we have only right-handed nucleotides able to give the instructions for forming proteins and only left-handed amino acids to be used in creating those proteins. Yet all of this was to have happened through mechanical processes with no intelligence involved. In any other field of study, such evidence would be clearly identified as purposeful organization. There is no reason to not count it so here, too.
Posted by Lenny Esposito at 1:37 PM
Labels: creation, evolution, existence of God, origin of life