Did Christianity Dominate Through Violence? 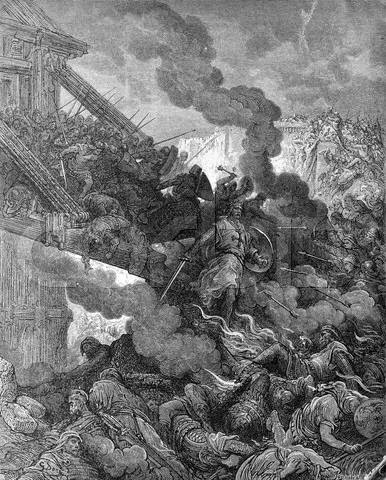 Yesterday, I began to examine a particular charge made by an atheist that "Christianity did not become a major religion by the quality of its truth, but by the quantity of its violence." This charge is not new; claims of Christian domination are common, with some offering the Crusades and others pointing to colonialism as examples of how Christianity sought to dominate the world. However, nothing could be further from the truth. In fact, neither of those examples are evidence for spreading Christianity through violence.


Missionary Christianity — The Spread of Love

When Christianity first began as a persecuted faith in the Roman period, the thing that attracted pagans to Christianity is their selflessness and their love. An anonymous second century letter exists, addressed to Diognetus, where the writer gives a clear description of how Christians are seen:


Yet, although they live in Greek and barbarian cities alike, as each man's lot has been cast, and follow the customs of the country in clothing and food and other matters of daily living, at the same time they give proof of the remarkable and admittedly extraordinary constitution of their own commonwealth. They live in their own countries, but only as aliens…They marry, like everyone else, and they beget children, but they do not cast out their offspring. They share their board with each other, but not their marriage bed… They obey the established laws, but in their own lives they go far beyond what the laws require. They love all men, and by all men are persecuted. They are unknown, and still they are condemned; they are put to death, and yet they are brought to life. They are poor, and yet they make many rich; they are completely destitute, and yet they enjoy complete abundance.  They are dishonored, and in their very dishonor are glorified; they are defamed, and are vindicated. They are reviled, and yet they bless; when they are affronted, they still pay due respect. When they do good, they are punished as evildoers; undergoing punishment, they rejoice because they are brought to life.1

This unwavering dedication in the face of the persecution that I wrote about in my last post is the evidence that the Christians' "quality of truth" was lived out.


Colonization and the Crusades

The spread of Christianity through missionary efforts providing the love of Christ did not end when Constantine converted. Augustine of Hippo, one of the smartest men in history, converted to Christianity because he was seeking wisdom.2 Other leaders of western thought, such as Tertullian, Origen, and Justin Martyr also converted on the strength of Christianity's truth claims.

The living out of Christian love had a huge impact as well. The Eastern churches began monasteries to what are now Russia and the Slavic states, where the people converted not by sword, but by their embracing of the local peoples. In the west, saints like Patrick, who was enslaved by the pagan Irish for six years, came back and showed his love to them, leading to the nation's conversion.

Of course there are examples of attempts at forced conversions by rulers such as Charlemagne or the Spanish Inquisition. But these are political power plays that sought to co-opt Christianity for their own ends. Christianity had a mandate from its founder to "make disciples of all nations," but Jesus forbade the use of the sword as the means to accomplish that task. These are the exceptions in the history of Christendom and they only occur after Christianity has become dominant within the culture, not before.

The Crusades are a unique matter. While they did contain a lot of heinous actions on both sides, one must remember they were never an attempt to conquer or convert anyone. Paul F. Crawford I his excellent "Four Myths About the Crusades" shows clearly that the Crusades were launched as a response to Islamic attacks on Christians in the Middle East. Christians were protecting their lands against invaders, not invading themselves.

The fact that Christianity grew through the missionary's sweat and not the soldier's boot is a well-known fact of history. By asserting that violence spread the Christian faith, Michael Sherlock hopes to with a wave of his hand erase some 2000 years of history. It's a claim that defies credulity. But there's one more piece of evidence that Sherlock fails to consider: the fact that even today the fastest growing religion in the world is Christianity and I know of no armies conquering ion the sign of the cross. We'll look more at that next time.

1. "An Anonymous Brief for Christianity Presented To Diognetus." Christian Classics Ethereal Library. http://www.ccel.org/ccel/richardson/fathers.x.i.ii.html Accessed 4/6/2014.
2. In his Confessions, Book III, Chapter IV, Augustine writes, "In the ordinary course of study I came upon a certain book of Cicero's, whose language almost all admire, though not his heart. This particular book of his contains an exhortation to philosophy and was called Hortensius. Now it was this book which quite definitely changed my whole attitude and turned my prayers toward thee, O Lord, and gave me new hope and new desires." See "Augustine: Account of His Own Conversion" from the Medieval Sourcebook web site. http://www.fordham.edu/halsall/source/aug-conv.asp