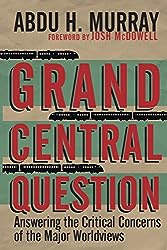 I recently was asked to review the new book Grand Central Question: Answering the Critical Concerns of the Major Worldviews written by Abdu Murray and published by InterVarsity Press. Unlike some other works that help instruct Christians to the task of defending the faith, Grand Central Question doesn't focus so much on objections and answers. Instead, Murray begins using a much broader perspective; he compares the worldviews of secular humanism, eastern religions and concepts of pantheism, and Islam against the Christian worldview. As our culture travels further and further from its Judeo-Christian roots, Murray's book is timely and important in providing the reader with key points of engagement.

Murray lays out his goal in Grand Central Question early. Following Ravi Zacharias, he defines a worldview as an overarching belief system that must cogently answer the four questions of 1) Why do we exist, 2) Is there a purpose to human life, 3) What accounts for the human condition, and 4) Is there something better than what we now experience. These four questions make up Murray's rubric to weigh the three primary worldviews above and see how they compare to the Christian position.

He does a fine job of confronting secular humanism, providing many quotes and comments from leading proponents such as Dawkins, Singer, Hawking and others. He also pulls from the different Humanist Manifesto statements, which serve as the closest thing to humanism's scripture since Darwin's Origin of Species. Next, Murray turns his gaze eastward. While he talks about Eastern views such as Hinduism, Buddhism, and other pantheistic faiths, his primary focus is on the Western understanding of these belief systems, and thus he covers New Age spirituality and even Scientology in his critique. The last area, and the one most well-developed, is the section on Islam. This is natural as Murray is a former Muslim himself and he holds key insights into both the Muslim and Christian understanding of reality.

Murray's background is that of a lawyer, and it shows through in his exploration of idea as well as seeking out the motives of holding those ideas. The real power of the book, though, is not in the detached arguments for or against a position, but in Murray's emphasis on the human cost in holding to or changing one's belief. Even in the first chapter, he tells of visiting a Muslim man who may be dying, but while Christianity appealed to him, he was deeply concerned with losing his children and their respect. This is truly where apologetics meets evangelism. Sometimes, one can get caught up in all the arguments and counter-arguments and forget that there are real, flesh and blood human beings who will really suffer if they were to leave their current religion to follow Christ. Murray continues to remind us that even in the 21st century counting all things as loss for the sake of Christ can be very difficult, as the loss may be extreme.

The book is an easy read and not too long, weighing in at 244 pages plus notes. Murray's anecdotes and examples prove to be good illustrations of conversational apologetics in practice, giving his readers a more clear view of the different aspects sharing ones' faith make take. Murray provides comparison tables to counter some of the Muslim claims of biblical corruption or that Jesus taught something different than Paul. He also takes the last two chapters to make the concept of the trinity and the idea of Christ's incarnation accessible, especially to a Muslim mind.

In all, I think Grand Central Question is an important work. There is no debate that we live in a post-Christian society. That means our apologetics cannot begin with the Bible, but must begin further back at the level of primary assumptions on how the world works. Abdu Murray has done a great job of helping the reader lay that foundation in conversational contexts. I find it a fine addition to the thoughtful Christian's library.
Posted by Lenny Esposito at 11:51 AM
Labels: Abdu Murray, apologetics, book review, Islam, worldview