Would Torture be Good if God is Evil?

Recently on my Facebook page, I was presented with this video from philosophy professor Stephen Darwall of Yale University who argues that one cannot hold to a view that morality comes from God.Because Darwall is a professor of philosophy, his arguments are more cogent than most, but I believe he gets the basis for good and bad wrong. In the following discussion with an atheist friend, I show how God's goodness is grounded in His nature, and also answer the question "Could there be such a thing as an evil God?" To see the complete thread, click here. 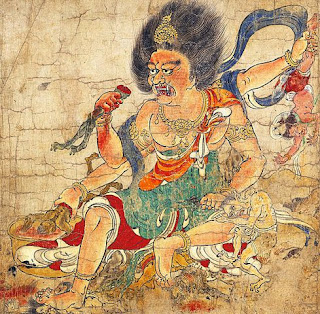 Lenny: This is an interesting video, Bernie. I appreciate that it is a thoughtful look at morality. However, the Divine Command Theory espoused here is not the same as the beliefs that I or historic Christendom has held. I don't believe that a value is good simply because God says so. That runs smack dab into the Euthyphro dilemma.

I believe that goodness is intrinsic to God - that is it is part of His nature. God tells us what is good because God is good. As a parallel, human beings are by nature communicative. We don;t choose to think using words and language, we do so because it is part of our nature to do so. So, there is a difference between the explanation above,which relies on God making proclamations that could be made another way and God making proclamations because they correspond to His nature.

For a counter-argument, this video by an atheist does a great job in describing the problems with rooting morality in a human framework. Check it out:
Moral Nihilist: The Intellectually Honest Atheist

Bernie: RE: "God tells us what is good because God is good. "

So that means that "good" is defined by "God" or more specifically defined by God's nature, correct? If so, makes me wonder where God got his nature from; and could it have been any different, and if so, then that different would have been the new "good?"

Lenny: I would word it more like good is that which corresponds to God's nature.

Bernie: So IF it were God's nature to be mean, then that would be considered "good?"

Lenny: That's Stephen Law's argument, but it begins to become confused. First, if we understand what evil is (a privation of the good), then we must realize that good can exist wholly apart from evil, but evil cannot exist apart from the good. That is, a wholly malevolent being who is also self-existent (as the term God is understood) cannot exist. Evil can only exist as a measure against the good, just like a dent cannot exist by itself but must be considered a defect in the original shape of another object. You can have a fender with no dents, but you cannot have a dent with no fender!

Secondly, William Lane Craig makes the point that If God is God, then he would be a being worthy of our worship. however, an evil anti-god is no such being.

Lastly, if an evil anti-god created the universe and his goal was to perpetuate evil, how would we then know what we're doing is evil? if we are following our telos, our purpose, then is such a thing even considered evil at all? You can see that positing a malevolent god starts to have some serious issues associated with it. I can't make any sense out of it based on objection #1 alone.

Bernie: RE: "That is, a wholly malevolent being who is also self-existent (as the term God is understood) cannot exist."

But you said the nature of God, whatever it is, is good. So if a god had an attribute of what we consider to be bad now, it would then be considered good, because it was the god's nature.

Lenny: Right. So the phrase "mean god" is akin to "square circle" since the word mean holds a moral value already.

Bernie: So if it would have turned-out that god thought torture was fun, we would all call that good, correct? Because, that is his nature, which defines good. Is that what you are claiming?

Lenny: No, for two reasons. First you are using a word like torture that carries moral weight. For example, would you say that a person is torturing a tree by picking off its apples? Of course not! The tree has a purpose - it provides food. To consume the fruit of the tree is neither torture nor cannibalism, but recognizing the value the fruit of the tree provides.

Moral values and duties are not arbitrary nor independent of the design of the one acting or of the thing being acted upon. Capricious morality (where God simply determines what's right and wrong by fiat) is more closely associated with Islamic concept of God than the Christian one.
Posted by Lenny Esposito at 11:26 AM
Labels: apologetics, existence of God, Internet, morality, problem of evil