Many times in popular articles commentators will state that old religious dogmas are being replaced by the new knowledge that comes from scientific discoveries. In fact, many people believe that science and religion cannot coexist - that fact and faith are contrary ways of understanding the world. Usually when this argument is asserted, it is to bolster the view that science is a better and truer way of seeing things; that humanity is in the process of abandoning its myths in order to come into a new enlightenment. 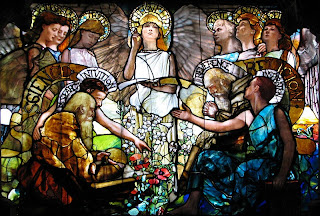 Unfortunately, those who advance such notions don't realize that they've made a fatal flaw in their thinking. They've not abandoned religion; they've simply substituted one belief system over another. What's more, to substitute science for religion is a proposition destined to fail. Let's look at the roles of both and see why.


The Role of Religion In The Life of Man

Throughout history, humanity has sought the highest meaning of life through religion. Christian scholars set out to try and understand the ultimate reality of our existence and to establish a cohesive worldview. People would turn to the cleric as a trusted source of knowledge in their search for the truth.

Christianity specifically has always held the view that the world can be knowable. The Christian worldview teaches that God created the material universe. Since the universe is designed by a rational being, it should behave in a predictable way. In other words, the world as we know it should act in accordance with certain observable physical laws and that would allow us to predict how objects will react in specific circumstances. This is the origin of modern science.1

Today, however, the understanding of religion has changed. Come up to a person today and say you want to talk about religion and you'll usually get an interesting reaction. Many people get uncomfortable discussing religious topics; they feel that religion is a personal matter and that spiritual matters should be a private affair.


The New Role of Science

Science, on the other hand, is treated much differently. New scientific breakthroughs are trumpeted in newspapers and discussed at the water coolers the next morning. Scientists are now looked upon as the ultimate arbitrator of truth. If science says something is true, it receives widespread public acceptance. Even corporate America has discovered that the credibility of a product will rise dramatically when a man in a white coat advertises its benefits.

It is because of the amazing achievements we've seen through science that many people have jumped to the conclusion that science is capable of explaining everything. However, science by itself is useless. It cannot answer the most important questions of morality and ethical actions. Science is primarily a way of understanding the material world. Science can tell us what is the case, but it cannot tell us what should be the case or what we ought to do about it.

A recent meeting of the European Society of Human Reproduction and Embryology highlights this difference with frightening clarity. Several shocking announcements were made in the name of advancing the science of human reproduction. Robin Marantz Henig of the Washington Post reports "An American scientist, Norbert Gleicher, announced that he and his colleagues had successfully inserted cells from a male embryo into an early-stage female embryo, creating a mixed-gender chimera that some journalists called a 'she-male.'"2 Gleicher allowed the embryo's cells to duplicate and grow for three days before killing the embryo.

In another announcement at the same conference, a group of scientists from Israel and Holland extracted egg from aborted female fetuses and kept them alive in the hope that the "aborted foetuses could one day be used to obtain eggs for fertility treatment, leading to the possibility of babies being born from mothers who were themselves unborn."3

Both these examples are pure science - those involved followed the scientific method in their experiments. And the Human Fertilisation and Embryology Authority, the UK agency responsible for licensing such research said there was no law that expressly forbade such experiments.4 So why do people recoil in horror at the thought of such experiments? Because it is our understanding of morality that tells us life shouldn't be used like tinker toys. Denying a fetus life and then using its remains as spare parts strikes us as repugnant. Fertilizing a human embryo to only experiment on it and destroy it is obscene.

Science without ethical guidelines is not a boon to mankind, but an unwieldy power capable of evil. It has no way of determining good. There is no scientific test for the moral. It is religion that tells us not only what is, but what's right. It is only when we practice our science with an overriding goal of pursuing the good that science can serve man at all.

The problem is really one of misunderstanding. Those who try to exalt science to the ultimate arbitrator of truth are committing a fallacy that is known as a category error. Science serves only to explain a small subset of the human experience - the way the material world behaves. Religion is an entirely different category - one that seeks to answer to what our purpose in life should be.

Now, the scientific progress that's been made in the last 100 years is astounding. It's allowed us to travel great distances with ease, given us the ability to communicate instantaneously, and overcome disease more easily than ever before. Neither are most scientists like those we've seen above. However Christians need to be aware that good science does not fly in the face of Christianity, but Christianity is its source. It is only when we grasp that science gets its worth from theology—the appreciation of God and his relation to the world—that we can use this tool to benefit mankind.