Should Christianity have a voice in politics, education, and the public square? Many people think so. They tend to believe that you can hold whatever belief you wish, as long as you don't "force your faith into a secular government."1 Organizations like Americans United for the Separation of Church and State have been trying to systematically remove all crosses or any type of religious displays set up on city or county properties. The thought is that in public areas such as schools and government a secular viewpoint is neutral while a religious viewpoint is biased. 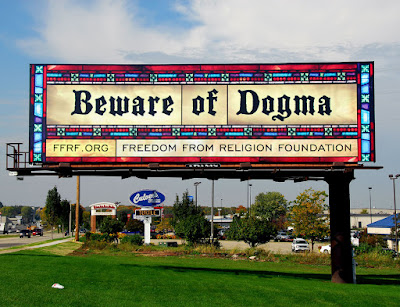 But I don't think that's true, and neither does philosopher Brendan Sweetman. In his book Why Politics Needs Religion, Sweetman discusses why secularism is anything but a neutral position. He first builds the case that secularism is a distinct worldview with its own specific beliefs. He states that every worldview is what he calls "a philosophy of life" In other words it is the grid through which we see and make sense of the world. Sweetman notes that every worldview holds the following traits:2
After outlining these traits, Sweetman notes how secularism clearly holds to each of the categories above. By denying the interjection of God or any kind of supernatural entities, secularists hold the nature of reality and the nature of persons are purely physical. Sweetman quotes the famous opening line from Carl Sagan in his Cosmos series, claiming "The Cosmos is all that is or was or ever will be." Sagan makes a clearly metaphysical claim yet secularists would never object to this series because of a distinctively religious viewpoint. Of course, secularists claim that the nature of values comes from ourselves.

Secularists hold to particular beliefs such as all humans should have the freedom to do or not do as they please, as long as it doesn't harm others. Thus we see the push for same-sex marriage, and euthanasia laws become more prominent and offered as secular stances against religious convictions. Secularists also hold to beliefs they cannot prove, such as concepts like the existence of the multiverse or the belief that science alone can answer questions such as "where do we come from?"

However, Sweetman goes further in his comparison. He argues that secularism is not merely a worldview; it can fall in to the category of religion. He outlines what religious beliefs entail and points out secular beliefs are formed in the same manner as other religious beliefs:


When a particular belief or view is described as religious, what is normally meant is that it is supported by or based upon or derived from some of the following sources: (1) a text, such as the Bible, the Qur'an, John Stuart Mill's On Liberty, Karl Marx's Das Kapital, John Rawls's A Theory of Justice, (2) the institutional churches), including representatives such as the priests and other authorities of the worldview (e.g., Billy Graham as a spokesman for Protestantism or Richard Dawkins as a spokesman for secularism); (3) a profound personal experience of some kind (e.g., the experience that God is near, the experience that people are fundamentally equal, etc.), (4) the tradition of the church in question (e.g., in Judaism by appeal to the Talmud; in secularism by [selective] appeal to the works of philosophers John Locke, Immanuel Kant or John Stuart Mill); (5) appeal to faith alone (e.g., believing that life is a gift from God on faith; believing that there is a scientific answer to the question of the origin of the universe on faith).

The reader will have noticed that I have deliberately included secularist examples of these sources, as well as examples from traditional religion, in order to illustrate that it is quite possible for a secularist to hold and to promote a belief based on these sources; these sources are not confined to religious believers. As long as a secularist belief is based on a similar type of appeal to the kinds of sources that religious believers might also use, then the arguments used to exclude religious beliefs because they come from these sources will also apply to secularist beliefs that come from the same kind of sources. Contemporary political theory, as we will see in chapter six, appeals frequently to the authority of liberal political tradition to support some of its important, indeed crucial, claims. These examples also serve to remind us and to emphasize again one of my main claims: that secularism is also a religion, and that it has the same formal structure as traditional religious belief.3

While it may be argued that Sweetman is really describing atheism as the belief system above, it has become increasingly difficult to separate secularism where no ideas based on a belief in God are allowed and atheism where no beliefs based on God can be found. If secularism is the default position in our political discussions, then isn't secularism elevating an atheistic viewpoint above other faiths?