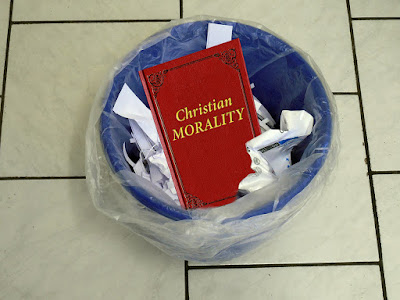 What is true freedom? Does having fewer restrictions make one more free? That's the message advertisers would foist on our kids. From the No Rules skateboard apparel to yesterday's MTV Video Music Awards where Miley Cyrus was given "pretty free reign… no rules,"1 to Ashley Madison's come-on slogan of "Life is short… have an affair, " the message is unmistakable: freedom means shedding the moral restrictions of the past.

It's part of people's nature to bristle against rules, especially those rules that would force one to curb his or her predilections. Children would rather eat candy than vegetables for dinner. Students would rather play video games than study. Most adults in society today look upon those desires as childish. They understand there are real consequences to taking the easy road. Ignoring the nutritional needs of one's body or educational opportunities that color one's future isn't a freeing experience; they have real and significant consequences.

Given the serious consequences of childish actions, people have come to realize that it is actually more freeing to live within these rules. The person who studied hard in school and has earned a degree has many more opportunities in front of him than one who didn't. The person who eats well has the freedom to perform better in sports. Freedom isn't about the next few hours or the next few days, but what happens over a lifetime.

While people generally agree on the obvious examples I offered above, this principle of freedom applies within the moral realm as well. Marvin Olasky recently interviewed University of Texas philosophy professor J. Budziszewski on the changes in attitude college students display today as opposed to years past. Budziszewski has been a keen observer of the difficulties Christian students face when entering college, and given our sex-saturated culture, the temptations for easy sexual hook-ups is everywhere. When asked about what the church can do about all the young people leaving their faith in college, Budziszewski answered:


We haven't a chance of getting people to live a Christian way of life if they think it is just a collection of joy-killing rules. What we should explain is that Christian morality is a prerequisite for happiness, and that it makes us more free, not less—free to do what is good rather than being jerked around by desires. People need to have the vision of the good that temptation is pulling them away from.2

This is a crucial message that the church hasn't communicated very well at all. We've turned sex into a series of "thou shalt not's" instead of emphasizing the holiness of sex. We've warned against the ways of the world in ominous tones instead of talking with kids about just how much freedom one gains when one works at developing the good in one's life. Gratification delayed does not mean gratification denied, it simply means you will have the freedom to experience the full joys of what God has intended for you without the nasty consequences. There will be more choices afforded to you and you will have more control over your life's path.