How Rational Are Rationalists When It Comes to Sex?

In his book God is Not Great, Christopher Hitchens writes, "Our belief is not a belief. Our principles are not a faith. We do not rely solely upon science and reason, because these are necessary rather than sufficient factors, but we distrust anything that contradicts science or outrages reason."1 It seems one of the more popular slogans that modern atheists like to banter about is the claim that they are not motivate by "ancient superstition" but by "logic and reason." There is even a t-shirt that says the same. The popular 2012 atheists’ conference was even named The Reason Rally. The claim to uphold reason above all is frequently repeated to me by those in the freethought movement.

Yet, there seems to be something else going on. More and more prominent atheists hold to a very liberal sexual ethic, announcing their "sexual orientation" shuns monogamy for multiple sexual partners,2  or have had their fair share of promiscuous flings.3 The American Atheists and the Backyard Skeptics co-sponsored a billboard proclaiming "Atheists make better lovers. (After all, nobody’s watching.)" Spokesman Bruce Gleason states, "Atheists make better lovers because they have less guilt about sex, while people believing in religious superstitions attach a negative aspect to sex. We do not think a supernatural deity is watching us — neither in life nor in bed."4 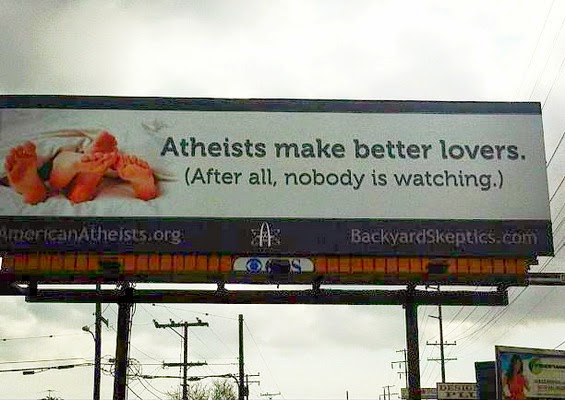 Aquinas on Reason and Passion

I want to stop here and clarify what I'm trying to say. I am not saying that just because someone is an atheist it means he or she is more sexually loose than others. But the claim to hold rationality seems to be contrary to the positions taken by the examples above. Thomas Aquinas recognized over 800 years ago that human beings had certain biological drives for sex, hunger, and other natural impulses—Aquinas called these "passions of the soul"—that we share with animals. These are necessary as they provide the drive for species to thrive and reproduce. But Aquinas also recognized that human beings have a unique aspect of the soul that animals do not have: the ability to reason. We have the ability to see our actions and to measure their ultimate ends. Will certain actions enforce rationality and self-control or will they simply strengthen the animal appetites? Aquinas holds in order to express one’s full humanity, reason must rule over and control the passions.5

Appetites are not good and bad in themselves, but they must be subjected to and governed by the faculties of reason, and they must help to strengthen our rational souls. Allowing any carnal desire or passion to become the driving force in a person’s life is inherently antithetical to reason. I agree with this. Today, if one lives to satisfy his or her urges or biological desires, we would classify that person as uncivilized.  But succumbing to such drives doesn't demonstrate that a person is more rational. On Aquinas’ view it would show quite the opposite.


The Irrationality of Atheist Sexual Promiscuity

Now, here’s the problem. If atheist principles "rely solely upon science and reason" as Hitchens claims, then why are so many atheists bowing to those animal passions as a driving force in their lives? How is the claim of polyamory as a sexual orientation applying the principles of logic and reason? Are groups like the Godless Perverts placing their passions under the control of their reasoning or are they seeking to express their animal desires? As more atheists identify with a loose sexual ethic, are they bolstering reason or strengthening the animal impulse?

In Sex & God: How Religion Distorts Reality, Darrel Ray writes, "Fear is the foreplay of religion. If done right, it interferes with all aspects of human sexual pleasure."6 One may claim that religion done right interferes with all aspects of human sexual pleasure only if one assumes that any sexual predilections are good and should be acted upon. But this is contrary to reason, which allows us to master our activities and keep our sexual urges under control. When Christian theology teaches that we should keep our animal passions in subjugation, it elevates humans to beings that are capable of living above their animal passions. Sexual restraint and monogamy demonstrate just how reasonable Christianity is.