Why It Must Be a Manger

In our house, the manager of our nativity set stays empty until Christmas eve, when we place the baby Jesus there. We used to have a nativity that was ceramic and hand made by my mother. Jesus couldn't be removed. But when my kids were born, they were fascinated by the set and wanted to play with the people. Rather than forbidding such curiosity, we encouraged it by buying a molded rubber set where they couldn't break the figures. 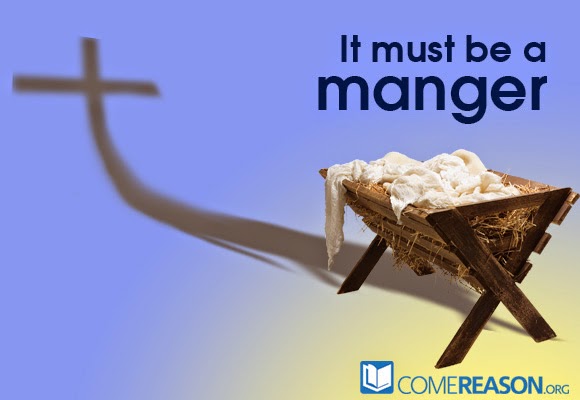 One of the outcomes of that choice was a couple family traditions that developed. First, the Wise Men were placed at the back of the house and traveled through each child's room before arriving in "Bethlehem" on Christmas Eve. (Yes, I know this isn't historically accurate, but it serves to make the point to the young audience.) Secondly, the baby Jesus is hidden and doesn't get placed in the manger until we ask one of the kids to do it on Christmas day.

The act of placing Jesus in the manger offers all kinds of opportunities for discussion. Have you ever wondered why Luke makes the point of saying that Jesus's first bed was a manger? There are at least three reasons that I can think of to show why the manger is important.


The Manger Links Jesus to All Men

Scholars like Ben Witherington tell us that Bethlehem was most likely too small to have a formal inn. The word used for inn is the Greek katalyma which is translated "guest chamber" and could be used for a guest room as well. Jesus sent his disciples to find a katalyma to eat the Passover meal in Mark 14:14. Given that Bethlehem was the family home of Joseph, they most likely stayed in a relative's house, but with so many relatives showing up, they would be relegated to the larger open room attached to the house where people would bring their animals in for the night.1

This would instantly make Jesus relatable to shepherds. Shepherds themselves were not thought of highly in Jewish culture, and to see the Savior of the world in the very tool they themselves used to feed their livestock symbolized that this King of Israel was for all mankind. No rank or provide bars access to the lord. He has come for anyone who would seek him.

Secondly, and perhaps most obviously, the humble beginnings of Jesus in the manger shows the very attitude of Jesus in becoming incarnate. Philippians 2:5-8 describes the incarnation this way:


Have this attitude in yourselves which was also in Christ Jesus, who, although He existed in the form of God, did not regard equality with God a thing to be grasped, but emptied Himself, taking the form of a bond-servant, and being made in the likeness of men. Being found in appearance as a man, He humbled Himself by becoming obedient to the point of death, even death on a cross.

That attitude persisted even through Jesus's adult life. He remained poor, and eschewed material comforts, saying The foxes have holes and the birds of the air have nests, but the Son of Man has nowhere to lay His head." (Luke 9:58, NASB).


The Manger Shows Jesus as the Bread of Life

Lastly, the manger is a crucial symbol of Jesus as the one upon who we rely for our existence. Mangers are feeding toughs; from them an animal receives its nutrition. Jesus frequently compared himself to our sustenance, saying "I am the living bread that came down out of heaven; if anyone eats of this bread, he will live forever; and the bread also which I will give for the life of the world is My flesh" (John 6:51). Even in establishing the communion service, Jesus equated the bread to his own body. The first thing done to the body of the baby Jesus is to lay it in a manger. Thus, by that very act he is shown to be real food for the whole world.