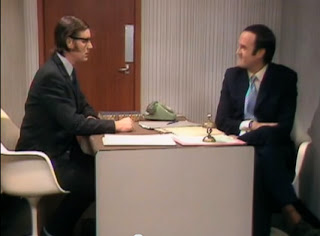 Mr. Vibrating: Yes it is.

Man: No it isn't. It's just contradiction.

Mr. Vibrating: No it isn't.

Mr. Vibrating: It is not.

Man: Look, you just contradicted me.

Mr. Vibrating: I did not.

Man: You did just then.

Man: Oh, this is futile!

I've always been a big Monty Python fan. The Pythons' ability to mix thoughtful, intelligent subjects with all-out silliness has never been matched. One of their most famous sketches is "The Argument Clinic" where a man pays for the service of having an argument. Unfortunately, his results are not what he expected. If you're unfamiliar with the sketch, you can watch it below.

The discipline of apologetics is all about giving reasons for your faith. I've engaged with many people, both in person and online, who are skeptical about the claims of Christianity or the Bible. They demand evidence for things like God's existence or the resurrection of Jesus. They say that "blind faith" should be avoided and reason should hold sway over our beliefs.

In such conversations, I usually agree. Christianity has never promoted a blind faith, but one based on certain evidence. Then, depending on the objection raised, I demonstrate this by explaining the evidence I have for my view. If we're discussing God's existence, for example, I talk about the fact that something cannot come from nothing, that we see clear signs of design in the conditions of the universe, and so on.

Like the man in the Argument Clinic, my reasons have been sometimes met with "but it isn't impossible that the initial conditions of the universe just happened to be set that way" or "it may be the case that the universe came from something else that we don't know" or "it could be possible that certain chemicals came together to form a living organism." Others will respond with claims that although science offers no answers for us now, it will someday; we just need to give it more time.

The problem with such replies is that they are not seeking to answer the question the skeptic originally raised. The person has asked you to defend the reasonableness of your belief. If you can show that your belief is built upon evidence, then you have at least met the initial query. The question now becomes is there any counter-evidence to rebut the evidence you have provided. This is a crucial step. It isn't good enough to say "Well, we don't know what happened so there could be other possibilities." Of course there could, but the burden of proof has just shifted to the one who is dismissing your evidence. He or she must do more than posit "just-so" scenarios.

Just-so scenarios are just that: ideas without any evidence behind them. As such, they put the objector in the very same category as that to which they are objecting: offering a case with nothing to support it. Part of being a rational person is to draw a distinction between what is possible and what is reasonable to believe.

There are a lot of things that may be possible in the world, but are highly unlikely: such as dealing oneself a royal flush in poker two times in a row. Of course mathematics shows that such an event is possible, but it isn't reasonable to believe that such a thing happened without deliberate intervention. If I'm playing poker and I see you dealt two royal flushes, I'm going to accuse you of cheating. That would be the reasonable thing to do. Similarly, seeing the strong evidences for a creator from the natural world, one is reasonable to infer deliberate intervention.

The man in the Argument Clinic sketch recognizes that he is not getting what he paid for. He complains:

Mr Vibrating: It can be.

Man: No it can't. An argument is a connected series of statements intended to establish a proposition.

Mr Vibrating: No it isn't.

Man: Yes it is! It's not just contradiction.

Mr Vibrating: Look, if I argue with you, I must take up a contrary position.

Mr Vibrating: Yes it is!

Man: Argument is an intellectual process. Contradiction is just the automatic gainsaying of any statement the other person makes.