Pagan Christmas Trees and the Burden of Proof

Many times when we seek to defend the faith, we can get caught taking on a bigger burden of proof that we should. I was recently reminded of this when a couple days ago I had two Jehovah's Witnesses visit my home. Given that it's three weeks before Christmas, we discussed the Christmas celebration and its roots. The Witnesses pointed to my tree and claimed it was originally a pagan symbol and Christians shouldn't be bringing such pagan symbols into their homes. 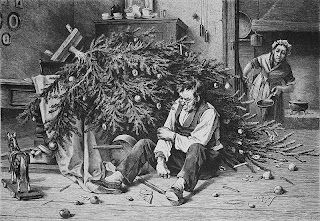 Now, I've heard this charge before. We hear tales of the yule log being tied to celebrations of the winter solstice and Christmas trees symbolizing a pagan concept of new life resurrecting through its ashes. This claim isn't limited to atheists; I found the following story on the Facebook page of a man who claims to be a Christian. In his article, he shouts that following holiday traditions is Baal worship and provides the following as "unequivocally historical." I've shortened the section a bit, but the words are his:


"Nimrod of Babylon whose wife Semiramis deified his memory by implementing an observance to replicate his death and this in the Yule log which was also chopped up to a stump, then she birthed an illegitimate child (Tammuz) through another man, and claimed this new child was Nimrod resurrected anew.

"To memorialize this she instituted a brand new young green sappling (Christmas tree) the next morning and sold this lie that on the night before Christmas the slaughtered and quartered former demi-god Nimrod entered into the fire of purification as a cut down tree (Yule log) and through being made pure as the savior of the world, he resurrected and regenerated the following morning as a new being, i.e. the green tree."

Christians who hear such charges are quickly put on the defensive, and they normally seek to explain how the Christmas tree (or Easter eggs, bunnies, or other symbols used in holiday celebrations) no longer holds their original meaning. They have been integrated into the Christian tradition and now carry Christian meanings—at least for the person with the tree in his house.

I agree that such an argument is valid. Even though we call the fifth day of the week Thursday, doing so in no way implies that we wish to exalt the Norse god Thor even if that's the origin of the day's name. But, as I've been researching Christmas origins, I've found that the real problem isn't with the pagan origins of Christmas traditions, but the spurious origins of the belief that Christmas traditions ever were pagan in the first place.


Did pagans ever use Christmas trees?

Let's look at the concept of bringing a Christmas tree into your home. Critics will try to point to some ancient rite or festival prior to Christianity where trees were used and force a connection between them. For example, Jacqueline Farmer, in her children's book O Christmas Tree, writes that the ancient Egyptians used palm branches to decorate their in celebration of the winter solstice. She then points to the Romans celebrating Saturnalia and says they also used evergreen branches to brighten their homes. Both are offered as the genesis for Christmas trees.

But, why should we believe that? It is no surprise that ancient people would decorate their homes to mark significant events, including the beginning of a new growing cycle. It is also no surprise that trees would play an important symbolic role across many cultures. Trees live much longer than people and can be identified as existing from generation to generation. Also, because fruits and nuts will grow on trees, they can be a source of food. Finally, the shedding of leaves and the new blossoms that accompany the seasonal cycle makes trees a natural symbol for these ideas. This is easily shown by looking at the practice of Northwest Native American tribes, who had no connection with Egyptian or Roman culture whatsoever, would take a tree to carve and decorating it as a totem pole.

Behind each of the assertions that Christmas and its traditions are rooted in paganism lies the flimsiest evidence. There is just no historical connection to Christmas trees and pagan rites. There are some scholastic works on the history of Christmas traditions that try to make the connections, but these tend to come from the eighteenth and nineteenth century, and are woefully out of date.

Simply pointing to some festival that used a log or a tree and then claiming that this proves Christmas to be rooted in pagan worship is on the same level as one who would point to totem poles and say that their origin lies in the Roman celebration of Saturnalia. The evidence for both is the same: cursory and unconvincing. Why not go even further and argue that since the Bible used the symbol of trees (the Tree of Life, the Tree of the Knowledge of Good and Evil) in its creation story, perhaps the Romans borrowed their use of trees from the Bible!

While Christians can make a case for symbols in modern culture adopting new meaning, I don't think it's necessary. It seems to me the burden of proof is on those making the charge of paganism, and I see no evidence to believe their charge has merit.
Posted by Lenny Esposito at 12:28 PM
Labels: Christian living, Christmas, compromise, culture, holidays, pagan