Of Mice and Men - How Our Assumptions Color Our Understanding 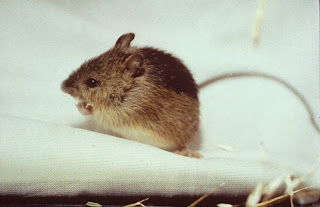 In my time as an apologist, I've come more and more to realize just how much the presuppositions of people will influence their interpretation of facts and truth-claims. All of us carry biases and it is important that we recognize and are sensitive to our own biases as well as those of the person with whom we're discussing things of God.

I was reminded of this just recently. When I used to commute to Los Angeles, I would pass a recycling facility. At one corner of the facility's yard is a large mound of debris that was compiled many years ago. The rubble is weathered and mature weeds grow from the artificial hillside. None of this is particularly worthy of note, except that there is a chain link fence surrounding the pile with both barbed wire and razor wire protecting its cache from any trespassers.

I thought it kind of interesting that a trash heap would be fenced off and protected to such a degree. Letting my mind wander, I thought "What would an archaeologist make of this discovery in a thousand years? He might assume that the contents of that pile were very valuable at one time, seeing as it's so well protected." Of course, I realized that the fence and wire were there to protect wayward explorers from injuring themselves and possibly suing the facility. But if someone didn't have that cultural understanding of our society, they could look at the same evidence I saw and come to a drastically different conclusion.

I further imagined that if this scenario came about the contents of the rubble pile would be cataloged and examined. Academic papers would be written, debates over the importance of this stone versus that one would surface and countless hours would be devoted to rebuilding whatever was supposed to have been originally housed at the site.

Now, this may sound a bit extreme; surely the science of our day is too sophisticated to make such an error! But the skirmish over a little mouse in Wyoming, as reported by the Seattle Post-Intelligencer underscores my point.(1) In 1954, Professor Philip Krutzsch identified a new subspecies of Meadow Jumping Mouse from examining the skulls and skins of several samples. The new species was named the Preble's mouse. In 1998, this study was offered as evidence to the U.S. Fish and Wildlife Service to help list the Preble's mouse as an endangered species, which the agency did.

Now, according to the Post-Intelligencer, "after six years of regulations and restrictions that have cost builders, local governments and landowners an estimated $100 million, new research suggests that the 'threatened' Preble's mouse in fact never existed." The newspaper reports that recent mitochondrial genetics studies, performed by a team from the Denver Museum of Nature and Science show that the mouse is identical to the Bar lodge mouse, a species common enough not to need protection at all.

Now the critic might say that this proves nothing since modern science caught its own mistake. However, I find it interesting that the only way we could have caught such an error is because we have existing specimens today. We're able to do such things as DNA testing. Remember, Krutzsch's original findings were based on skeletal and skin samples and they were considered acceptable at that time as the article points out. If no live samples of the so-called Preble's mouse were around to be tested, I wonder if the error would have been caught at all.

In fact, that's the whole reason for this discussion. Evolution as a field of study is based pretty much on the evidence of skeletal remains. We have some fossilized skin patterns, footprints, and such. But most of all the advances in evolutionary theory are from fossilized bones. If a modern day professor got it wrong about a mouse that he was able to observe, than how much more likely is it that paleontologists make mistakes interpreting fossils. In fact, author Luther Sunderland asked David M. Raup, a noted evolutionist and Curator of Geology at the Field Museum of Natural History at the University of Chicago, about the practice of naming the same creature by different species names when it's found in different period rocks. "He acknowledged that it used to be a very common practice and still occurred… it was done purposely because of an a priori theoretical mode, but he thought most of these had 'been cleaned out now'."(2)

So here we have evidence that the bias of the scientists come into direct play when they seek to identify a new species. In fact, Raup noted that many times this was done on purpose to try and make the evidence conform to the theory instead of the other way around. He later tells Sunderland that "approximately 70 percent of species described are found to be the same as existing species, so 70 percent of the new species named should not have been, either through ignorance or because of the rules used by taxonomists."(3)

As the debate over evolution continues to heat up, Christians have recurrently been accused of ignoring the evidence because of their beliefs. Is this charge true? Perhaps in some cases. However, the history of paleontology shows just as large a bias on the part of the evolutionists. So, the next time you are discussing the issue with a friend or colleague, make sure you're sensitive to the assumptions that lie behind the assertions. Their facts may be as tenuous as a rat in a trap.