We are currently looking at three signs of a religious cult of Christianity– that is a religious sect claiming to be based on the teaching of Jesus but one that in reality promotes heretical doctrines. My last post talked about the fact that many of these cults have a charismatic leader who claims to have the "inside track" on God's truth. They claim that all of Christianity has been corrupted, mistaken, or duped by its hierarchy and only they can set things right again. 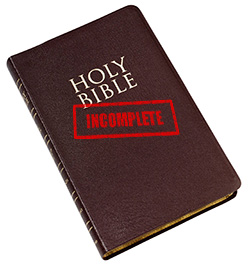 Today, I'd like to look at the second sign of a cult—a new revelation from God that becomes the authoritative source for understanding Him and His word. This is a natural corollary to the first sign. Since these sects claim that historic Christianity has been duped, they need to provide their followers with some type of new filter or new revelation in order to "set things right" again. Sometimes, this appears as an entire new set of Scriptures. Joseph Smith offered his Book of Mormon as "another testament of Jesus Christ" Smith claimed it is "the most correct of any book on earth, and the keystone of our religion, and a man would get nearer to God by abiding by its precepts, than by any other book."1 Along with the Doctrine and Covenants and Pearl of Great Price, Smith offered an entirely new set of scriptures to his followers. He claimed that the Bible text had been lost or changed,2 and he took it upon himself to provide a new translation, a project he did not finish before his death.

Many other sects rely on the bible as the source of scripture, but make the claim that one cannot understand the truths therein without their special insight. Mary Baker Eddy produced Science and Health with Key to the Scriptures claiming to have "rediscovered the healing principle of Jesus and his disciples, lost since the early Christian era."3

The Jehovah's Witnesses continue to make this claim with their production of The Watchtower and Awake! magazines. In fact, the September 15 1910 edition of the Watchtower made this famous claim:


"If the six volumes of Scripture Studies are practically the Bible, topically arranged with Bible proof texts given, we might not improperly name them the Bible in arranged form. That is to say, they are not merely comments on the Bible but they are practically the Bible itself… people cannot see the divine plan in studying the Bible by itself, we see that if anyone lays the Scripture Studies aside and ignores them and goes to the Bible alone.. within two years he goes into darkness. On the other hand, if he has read the Scripture Studies with their references, and has not read a page of the Bible, as such, he would be in the light after two years, because he would have the light of the scriptures."4

When the Apostle Paul heard that the church he planted in Galatia was falling for one of these charming preachers teaching a new doctrine, he wrote them a letter and made his concerns known in no uncertain terms:


"I am astonished that you are so quickly deserting him who called you in the grace of Christ and are turning to a different gospel—not that there is another one, but there are some who trouble you and want to distort the gospel of Christ. Even if we or an angel from heaven should preach to you a gospel contrary to the one we preached to you, let him be accursed. As we have said before, so now I say again: If anyone is preaching to you a gospel contrary to the one you received, let him be accursed!" (Gal 1:6-9)

Paul uses the strongest language possible to say that the idea of new doctrine, no matter the source, is not really something new, but something false! He says that such teachers should be accursed, using a term reserved for those to whom the most severe judgments apply.

Ultimately, this concept of a new scripture or a new interpretive scheme is a big red flag that what these sects offer is not to be followed. Jesus said that scripture cannot be broken (John 10:35) and even the gates of hell could not prevail against His true church (Matt. 16:18). So why should we believe that His teachings have been lost? If the claims of these new revelators are true, then they contradict Jesus Himself!

Peter tells us that "no prophecy of Scripture comes from someone's own interpretation, for no prophecy was ever produced by the will of man, but men spoke from God as they were carried along by the Holy Spirit." He then warns that "there will be false teachers among you, who will secretly bring in destructive heresies, even denying the Master who bought them, bringing upon themselves swift destruction" (2 Pet. 1:20-2:1). Cults deny Jesus by denying His word is sufficient in itself. Such denials do not lead to life but to the destruction of those who would hold them.