I've written before about atheist Internet memes, these static images with a slogan or question are meant to quickly prove the atheists' point that belief in God is just so ridiculous it can be this easily disproven. But such attempts usually backfire, showing the poster as the one who really doesn't know the arguments in question, or even the subject matter of the meme itself. 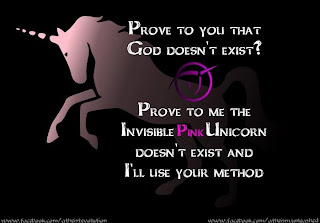 I stumbled across one just the other day that truly underscores my point. A group of atheists who manage a couple of pages on Facebook page look to be responsible for the image to your right. The meme is meant to answer the Christian demand that if atheists want to state a proposition like "God does not exist" or "God is a fictitious being" then they should be able to provide arguments and evidence for their position.

Many atheists have responded to the demand by saying that one cannot prove a universal negative. They say it's like trying to prove that invisible pink unicorns don't exist. As the meme says "prove to me the Invisible Pink Unicorn doesn't exist and I'll use your method."

So, now the burden rests on the atheist to disprove God in like manner. Remember, the meme says if I prove it, they will use my method. Now, of course many will try to offer arguments that are either invalid or unsound. But offering just any argument doesn't do the trick. A sound argument must support its conclusion with its premises, just as I did above. I made sure I defined my terms and I didn't make any leaps in assumption when laying out my premises. Therefore, my conclusion necessarily follows.

I was able to show that a universal negative can be proven and I was able to meet the atheists' challenge. What are the odds that they will give a serious attempt to actually act on their words and use my method?
Posted by Lenny Esposito at 10:28 PM
Labels: atheism, existence of God, Internet, logic, memes