The silliness of claiming we were all atheists at birth

There has been a lot of talk in the past few months about "fake news." Fake news stories are those purported by some web site as real and shared by people who want them to be true, but have no basis in fact. They simply help confirm the bias of some group. Usually, the story gets repeated and simply because it appeared "in print" or from a semi-authoritative site it is accepted without question.

But, the phenomenon of believing outlandish claims because they conform to what we want to be true is not new. The Internet just helps to spread them more quickly. For example, take the idea that all people are born atheist. I saw a meme recently picturing a group of babies and a caption that reads "Atheists. Can't you just feel the evil of their ways?" Several show a baby being baptized while exclaiming, "Stop, I'm an atheist!" EvolveFish offers a bumper sticker for sale reading, "You don't become an atheist. You go back to being one." The most popular version takes a more negative tone in claiming "We are all born atheist until someone starts telling us lies." 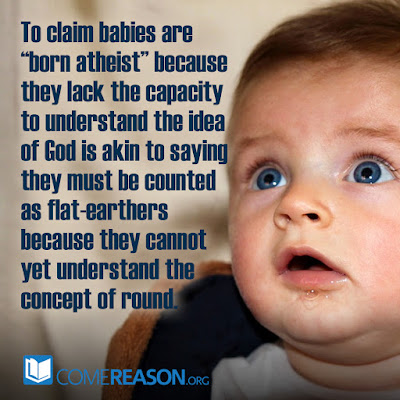 With all their talk of being rational and "brights," I wonder how anyone in the atheist movement could buy into such a silly charge. No, we are not all atheists at birth. Newborns haven't yet developed the rational capacity for abstract belief. They are only concerned with their immediate needs: eating, discomfort, feeling safe, and the like. To claim that because they lack the capacity to understand the idea of God somehow makes them an atheist is akin to saying because they cannot yet understand the concept of round they must be considered flat-earthers. After all, flat earth believers only reject what they cannot see.


Desperately trying to bear no burden

Of course, one reason for the recent popularity of the claim that babies are born atheist is the desire by a lot of atheists to redefine the term atheism as something that is neutral; a term that makes no claims. But atheism does make claims, just as one who holds to a flat earth is making a claim. The earth must have some shape to it and as a person becomes aware of shapes he or she will no longer be neutral as to what they believe the shape of the earth is. They hold a position.

Similarly, as one becomes aware of the concepts like other minds exist, effects have causes, things that show evidence of design will have a designer, we must be able to explain our own origin, etc., then one will no longer be neutral as to the question of God. The person may not be "all in," that is 100% certain either for or against God's existence, but that doesn't mean he or she isn't making a judgment.

That's why it's impossible to take a position that says "We aren't going to teach our kids about any religion, but we'll let them make up their own minds." By modeling a life where God is meaningless, they are taking a position and they're teaching it to their kids. By claiming all children are atheists "until someone starts telling us lies," one is making a truth claim about God. It isn't neutral!

Atheism makes a knowledge claim about God's existence; therefore, one must teach his or her children there is no God. If atheism were the default position, then history would be littered with civilizations and cultures that were atheistic. But those don't exist. The entire record of human existence clearly shows that human beings have held to the belief there is some kind of divine power to which we owe our ultimate origin. Certainly, many have gotten things wrong—that's another argument. But to claim that all babies are atheists is silly and actually embarrassing for the movement.
Posted by Lenny Esposito at 8:32 AM
Labels: apologetics, atheism, beliefs, existence of God, memes