Throwing Out the Riches of Christian History 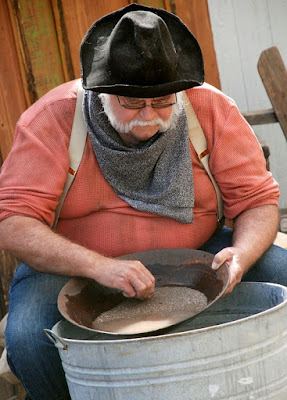 After the discovery of gold in California in 1849, the American west was bristling with gold fever. Prospectors were traveling to both California and Nevada seeking to strike it rich. By 1859, much of the surface gold had been retrieved from the area around the Carson River, but two prospectors, Patrick McLaughlin and Peter O'Riley, sought to mine deeper into the hillsides. 1

They used rockers to extract some gold from shallow deposits, but continued to be vexed by a bluish-black clay that kept clogging their mining equipment. This "annoying blue stuff" had been plaguing miners for over a year, as the equipment had to be continually cleaned of the heavy, sticky stuff so it could be discarded.2 What they didn't realize is they had been throwing away a fortune. When the clay was sent to an assay office in Grass Valley, CA. it was found that each ton of the material would yield $876 in gold, but it held nearly $3,000 in silver! 3 Because the miners only knew about gold, they had been throwing away a fortune.

I think Christians can sometimes suffer from the same problem. It is no doubt that all believers revere the Bible as God's word and it is the most valuable thing we have to know and learn from God. Yet, many Christians only focus on the Bible and they don't learn about the rich heritage of Christian history. Christians of past ages have studies, learned, and argued for their faith even as we do today. They have already worked through manty of the difficulties that we believe are modern in nature and they offer a wisdom and insight into the scriptures that shouldn't be overlooked.

In fact, many of the supposed "new" arguments against God have been addressed centuries ago. For example, take the Richard Dawkins quote from his 2002 TED Talk: "We are all atheists in most of the gods humanity has ever believed in. Some of us just go one god further."4 This is merely rhetoric, and it isn't new.

In the second century AD, the Christian Athenagoras wrote to the Emperor of Rome complaining about how Christians are being unfairly persecuted. One charge leveled against them was that Christians were atheists, because they didn't believe in the pantheon of Gods. Here's Athenagoras' reply:


As regards, first of all, the allegation that we are atheists—for I will meet the charges one by one, that we may not be ridiculed for having no answer to give to those who make them—with reason did the Athenians adjudge Diagoras guilty of atheism… [for he] openly declared that there was no God at all. But to us, who distinguish God from matter, and teach that matter is one thing and God another, and that they are separated by a wide interval (for that the Deity is uncreated and eternal, to be beheld by the understanding and reason alone, while matter is created and perishable), is it not absurd to apply the name of atheism? …since our doctrine acknowledges one God, the Maker of this universe, who is Himself uncreated (for that which is does not come to be, but that which is not) but has made all things by the Logos which is from Him, we are treated unreasonably in both respects, in that we are both defamed and persecuted.5

In his letter to the Emperor, Athenagoras rightly refutes the charge of atheism with respect to the Roman gods as absurd. The Christians do believe in an uncreated being who is the source of all other things. Therefore, Athenagoras demonstrates the ridiculousness of the argument that not believing in Roman gods would make one an atheist "among other gods." That isn't what atheism means. It means one believes in no god of any kind whatsoever. To claim that I am an atheist concerning "most of the gods" is as much an error as claiming Dawkins is a creationist because he believes most of our modern technology has been intelligently designed. Athenagoras refuted Dawkins' point before 190AD!

This is simply one example of the riches that await the Christian who seeks to study the history of Christian thought. While the Bible is spiritual gold, we ignore far too much silver simply because we don't take the time to dig in and see how valuable such studies can be. Don't make that mistake.