The news was overwhelming and sad. Fourteen people were killed by a man and woman in San Bernardino. As the events are still unfolding, we don't yet have a clear picture of what their motives were or how much of the attack was planned. We don't know if this was a planned terrorist target, a reaction by a disgruntled employee, or something else. It's best not to speculate until the facts are in.

However, the shock of the events had people wanting to express themselves so the first reaction people had was to pray for the comfort of the victims' families and any injured in the attack. Government officials and presidential candidates offered public statements to that effect. Speaker Paul Ryan tweeted "Please keep the victims of #SanBernardino, California in your prayers." Senator Ted Cruz tweeted, "Our prayers are with the victims, their families, and the first responders in San Bernardino who willingly go into harm's way to save others." These sentiments were joined by many thousands of others.

The turn in all this was the snide reaction of others to the idea of praying in response to a tragedy. Cruz's tweet was met with comments like these:


Those in the media also assaulted any public call for prayer, like the headline of the New York Daily News: 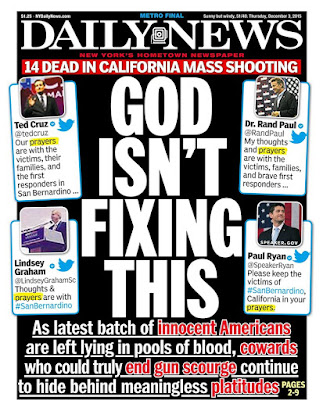 The Huffington Post ran a piece with the lede "Another Mass Shooting, Another Deluge Of Tweeted Prayers: Seems to have been an ineffective strategy so far."

The fact that one's commendation of prayer is now condemned by media and a segment of the general public shows just how far down the rabbit hole our culture has fallen. I realize that much of these railings against prayer are by people and organizations who want to establish gun control laws. But why would they choose the encouragement of prayer as their target when their motivations are a political stance? How does that follow? We don't know anything about where or how the killers got their guns, why they were shooting people, or what their ultimate objectives were. Therefore, we cannot know that any kind of gun control measures would be effectual at all. The killers had also constructed at least three bombs, which were defused by authorities. How come no one is asking for more bomb-control legislation?

More tellingly, this reaction shows just how out of touch these folks are with religious ideas as elementary as prayer. Notice the theme in the incendiary reactions to prayer. They all talk as if we are praying God would somehow stop all shootings. That isn't what people were being asked to do. They are praying for a safe resolution to the evil actions committed by sinful human beings. They are being asked to petition for a level of solace for the victims' families. They are praying for the recognition that whether it's a gun, homemade bombs, knives, airplanes, or something else, the evil inherent in mankind will continue to express itself in the death of others until Jesus comes back.

Prayer is one way we demonstrate that we as human beings don't have all the answers. We can try to reduce the evil we see in the world to some extent, but to think that we don't need prayer because we can legislate all evil away is an uncanny mix of stupidity and hubris. We need prayer not only so God may offer grace to those suffering, but to remind ourselves that we are beholden and answerable to an authority above ourselves. And those who pray are more likely to offer grace and mercy in other, more tangible ways as well. So, let's encourage prayer.
Posted by Lenny Esposito at 9:24 AM
Labels: culture, media, prayer, religion