Most apologists are well aware of the command in 1 Peter 3:15 to "always be prepared to give a defense to those who ask for the hope that is within you." In fact, they will point to it as an example of God commanding Christians to engage with an unbelieving world. Yet, I've seen Christians think that in order to be faithful to 1 Peter 3:15, we must field every objections thrown at us, regardless of what it is. But there are some objections that are themselves unreasonable, and part of offering a defense is calling out the objector who offers frivolous complaints. 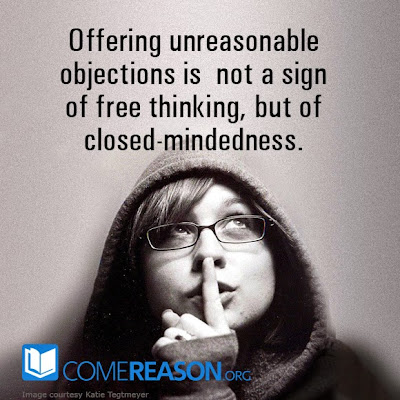 As an example of what I mean, let's look at an article I published last week entitled "Why Would a Loving God Allow the Earthquake in Nepal?" The article explained why plate tectonics, the movements which cause earthquakes, are crucial to support life on earth. One commenter on the post offered the following objection:


What a pile of drivel. So this god isnt to blame for all the deaths from quakes because they are necessary to stop the earth becoming desolate lol.

So this omnipotent god couldnt make a planet without plate tectonics?

The only reason we need a magnetic fields protection is because this god is slinging cosmic rays everywhere.

This god cant control biodiversity, chemical balance ,raise mountains from the sea(bible claims he can) without the use of earthquakes ? lol

If this omnipotent god cant create a world that works well without the need to kill thousands of people every year then its a very poor god indeed.

One will quickly notice that the objector doesn't doubt that plate tectonics do all the necessary things I said they did. His objection boils down to simply, "Surely, God cold have done it some other way!" Really? Exactly what way would this person suggest? Does he have another model that he would like to offer?

Perhaps he is arguing that if God exists, then no one should ever die from any natural accident. Natural laws should never endanger human lives. But, the implications of that are staggering. If no one should be harmed because of natural processes, then what do we do about the law of gravity? No one should fall off a cliff and nothing should ever fall on anyone. Is that a reasonable model? What "other way" is there for these kinds of calamities? His objection boils down to either repealing the law of gravity (which means that life on earth is again impossible) or human beings themselves become indestructible. That second choice was exactly what God did not want to happen, because people were in a state of sin. He never wanted a sinful human being to live in his sinful condition for all of eternity (see Genesis 3:22-24.)


Gainsaying Is Never a Path to the Truth

The primary issue I have with objections like this, and I see such objections all the time, both online and in personal conversations, is they aren't honest. The person asking isn't really looking for an answer; he is simply taking a contrary opinion to the evidence offered already. He was simply doing what is known as gainsaying, taking up a contrary position to discount my evidence instead of interacting with it. It means he ignored the evidence presented and complained that he didn't like the conclusions that followed.

Gainsaying is not thinking. It's simply negating whatever you don't like. I find it interesting that certain atheists will fall into what I call the outrageous objection such as the one above ("if God can do anything, then I want the world to look like this…"). But if one upholds reason as a central virtue, then such tactics should strike him or her as repugnant.  It proves that one isn't open to following the evidence wherever it leads. In fact, offering unreasonable objections isn't a sign of free-thinking, but of closed-mindedness. 1 Peter 3:15 doesn't say that the Christian has to answer every objection, no matter if it's a good or bad. We are commanded to defend the reality of the resurrected Jesus and the reasonableness of the Christian worldview. Because Christianity places a very high value on reason, it is appropriate to identify an unreasonable objection and demand that the objector offer something more concrete. By so doing, you demonstrate how much you value reason yourself.
Posted by Lenny Esposito at 1:10 PM
Labels: apologetics, atheists, Internet, meme, witnessing