Can Neuroscientists Use MRI Imaging to See Thoughts?

Is it possible to see someone think? Can a machine ever capture the thoughts of another person, their dreams or imaginations? A lot of people think that science is almost to that point, but they really don't realize just how different thoughts are from brain activity. 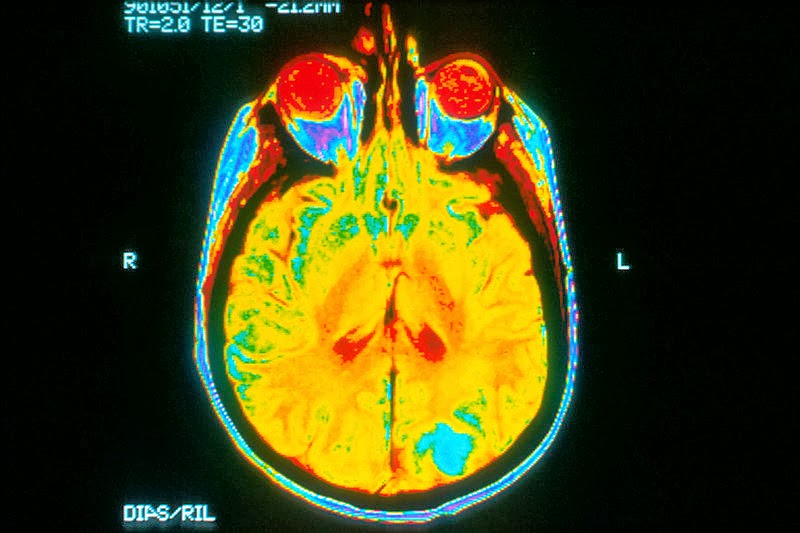 Some of this confusion stems from the fact that the media are not really good at nuancing their stories when they report on things like brain scanning techniques. One such example is the reports that began to circulate when scientist used an fMRI scanner to measure blood flow through the visual cortex of the brain while people were looking at a specific image. They then built a computer to map the blood flow and they reproduced a kind of silhouette of the image itself. This isn't surprising, really, since blood flow to the visual cortex is a chemical response to stimulus from the optic nerve, kind of the same way film has a chemical reaction to light exposure. However, UC Berkeley's newsroom carried the story with the headline "Scientists use brain imaging to reveal the movies in our mind" and  wrote, "Imagine tapping into the mind of a coma patient, or watching one’s own dream on YouTube. With a cutting-edge blend of brain imaging and computer simulation, scientists at the University of California, Berkeley, are bringing these futuristic scenarios within reach."

This makes for great sharing on the Internet, but fMRI imaging is nothing like understanding what someone dreams or imagines. In fact, it has a really hard time telling scientists what is even going on when they can see activity in the brain. Alva Nöe, another professor at UC Berkeley and a member of the Institute for Cognitive Brain Sciences does a great job describing just how crude tools like fMRI really are. In his book Out of Our Heads: Why You Are Not Your Brain, and Other Lessons of Consciousness, he explains:


"PET and fMRI yield multicolored images. The colors are meant to correspond to levels of neural activity: the pattern of the colors indicates the brain areas where activity is believed to occur; brighter colors indicate higher levels of activity. It is easy to overlook the fact that images of this sort made by fMRI and PET are not actually pictures of the brain in action. The scanner and the scientist perform a task that is less like gathering a photographic or X-ray image than it is like the process whereby a police sketch artist produces a drawing of a suspect based on interviews with a number of different witnesses. Such drawings carry valuable information about the criminal, to be sure, but they are not direct records of the criminal's face; they are, rather, graphical renderings based on perhaps conflicting reports of what different individuals claim to have seen. Such a composite sketch reflects a conjecture or hypothesis about, rather than a recording of, the perpetrator. Indeed, there is nothing in the process that even guarantees that there is a single perpetrator, let alone that the sketch is a good likeness.

"In a similar way, images produced by PET and fMRI are not in any straightforward way traces of the psychological or mental phenomena. Rather, they represent a conjecture or hypothesis about what we think is going on in the brains of subjects. To appreciate this, consider that we face a problem from the very beginning about how to decide what neural activity is relevant to a mental phenomenon we want to understand. Scientists start from the assumption that to every mental task—say, the judgment that two given words rhyme—there corresponds a neural process. But how do we decide which neural activity going on inside you when you make a rhyming judgment is the neural activity associated with the mental act? To do that, we need to have an idea about how things would have been in the brain if you hadn't performed the rhyming judgment; that is, we need a baseline against which to judge whether or not the deviation from the baseline corresponds to the mental act. One way to do this is by comparing the image of the brain at rest with the image of the brain making a rhyming judgment. The rhyming judgment presumably depends on the neural activity by virtue of which these two images differ. But how do we decide what the brain at rest looks like? After all, the brain is never at rest. For example, there are stages of sleep when your brain is working harder than it does at most times during the day!" (Emphasis added)1

So, to see things like thoughts that exist only in your conscious mind and are not produced by external stimulus are nothing like the images that MRIs produce. You may say, "But at least we can see what happens when someone is looking or talking, right?" Nope. You still have to ask the patient what he or she is experiencing. Nöe goes on:


"Comparison provides the best method available for uncovering the areas of the brain that are critically involved in the performance of a cognitive function. For example, suppose you were to produce a bunch of PET images of people listening to recordings of spoken words and then making judgments about whether given pairs of words rhyme. To isolate the activation responsible for the rhyming judgment, as distinct from that responsible for the auditory perception of the spoken words, a standard procedure would be to compare these images with a second set of images of people listening to recordings of spoken words but not making rhyming judgments. Whatever areas are active in the first set of images, but not the second, would be plausible candidates for the place in the brain where the rhyming judgment takes place.

"This method of comparison is cogent and it holds promise. But it is worth stressing that its reliability depends on a number of background assumptions, not all of which are unproblematic, as Guy C. Van Orden and Kenneth R. Paap have convincingly argued. For one thing, sticking to our example, the comparison method assumes that there is no feedback between what the brain is doing when we make a rhyming judgment and what the brain is doing when we perceive the words. If there is indeed feedback, then it would follow that overlapping regions in the images do not necessarily correspond to a common neural factor."2

Because there is so much activity in the brain, it becomes really difficult to construct an objective model of even which areas of the brain are involved in which discreet process. And even that makes an assumption that thoughts can be relegated to a single area of the brain. We don't know that to be true. What we do know is that consciousness is something completely different than brain activity. I'll talk more about that in an upcoming post. Just don't let news reports or popular movies lead you to believe otherwise.